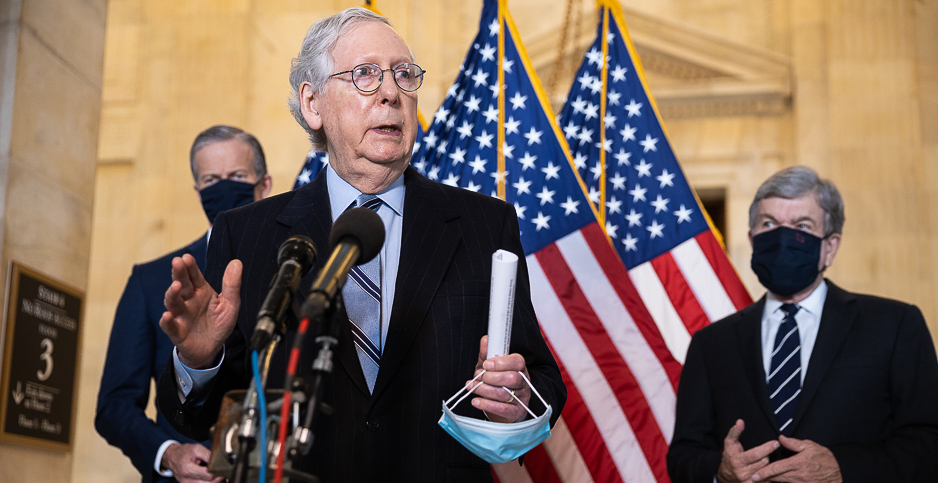 Top congressional Republicans are warning Democrats against splitting up the upcoming infrastructure package, raising new doubts for the prospects of bipartisan cooperation on a top Biden priority in the months ahead.

Key GOP senators yesterday threw cold water on reports that the White House is considering advancing some infrastructure components with bipartisan support through regular order, while moving policies favored only by Democrats through the budget reconciliation process, which allows certain bills to skip a Senate filibuster (E&E Daily, March 23).

"If this is what they decide to employ, it’s a pretty cynical ploy to try and appeal to Republicans to vote for all that stuff, and then do reconciliation to do all the other hard stuff," Senate Minority Whip John Thune (R-S.D.) told reporters in the Capitol.

He said that Republicans have made it "abundantly clear" that they’re willing to work with Democrats on infrastructure.

"But if they decide to do that as a ploy to lure Republicans in to vote for the easy stuff and then do all that stuff, the controversial stuff through reconciliation, I don’t think our guys are going take the bait on that," Thune added.

Sen. Shelley Moore Capito (R-W.Va.), the top Republican on the Environment and Public Works Committee, noted ongoing efforts with EPW Chairman Tom Carper (D-Del.) on a bipartisan surface transportation bill but questioned the extent of what Democrats may have in mind beyond traditional infrastructure, which she said includes highways, broadband and water projects.

"The scope of what I’m hearing is much greater than what I envisioned of infrastructure," Capito told reporters.

She added that it would likely complicate the calculation for Republicans to support infrastructure through regular order if they know there’s also a reconciliation package coming along.

"I think reconciliation presents a challenge to every Republican," Capito said. "I think … it makes it a problem."

Despite Republican objections, Senate Majority Leader Chuck Schumer (D-N.Y.) yesterday did not rule out splitting up the infrastructure package.

"As we’ve always said, we prefer to work with Republicans to attain that package," Schumer told reporters. "If we can’t, we’ll move forward other ways, but there are various different options that we’re exploring."

Schumer added that top Democrats are "talking to the White House regularly" about infrastructure. "We had a lengthy discussion this weekend," Schumer said. "Look, the one thing we’re united on — [House] Speaker [Nancy] Pelosi [D-Calif.], President Biden, myself — we want a big, bold, strong package."

Budget Chairman Bernie Sanders (I-Vt.), who will play a key role if Democrats pursue budget reconciliation again, also did not rule out the strategy yesterday.

"This country faces … enormous structural crises: rebuilding our infrastructure and addressing the existential threat of climate change," he told reporters. "And we’ve got to figure out the most effective way to accomplish that goal."

Republicans on the House Ways and Means Committee boycotted a members’ day hearing to protest what ranking member Kevin Brady (R-Texas) called a "sham" intended to "check the box to satisfy regular order on a major infrastructure overhaul."

"This is a topic too important, too widespread and frankly too costly to politicize this way," Brady said at the outset, when he announced that GOP members would participate in a separate GOP event on "President Biden’s Recovery-Killing Tax Grab."

Brady’s comments followed the opening remarks of Chairman Richard Neal (D-Mass.) — who cited the recent Texas blackouts; the Flint, Mich., water crisis; and the COVID-19 pandemic — and called for a new "definition of infrastructure."

"Our roads, bridges, transit, water systems and electrical grids need updating, but so do the social supports that enable workers to fully contribute to the economy," Neal said. "Simply put, the road underneath you may get you to work, but it is the access to affordable child care that gets them through the day."

Democrats on the panel used the hearing to lay out an assortment of policy preferences, including repealing elements of the 2017 GOP tax overhaul and using the tax code to tackle climate change.

Whether or not Republicans are willing to participate, the Ways and Means hearing yesterday also raised questions about how carbon pricing fits into infrastructure talks.

Long a popular idea among climate advocates, carbon tax and fee schemes have been met with skepticism in recent years from some Democrats, who view them as a political dead end that could allow the fossil fuel industry to continue polluting.

House Energy and Commerce Chairman Frank Pallone (D-N.J.), for instance, said earlier this month that there are "a lot of environmental justice concerns with allowing companies to pay to continue polluting, so the votes are just not there for a price on carbon."

But carbon pricing remains popular among moderates, including Rep. Scott Peters (D-Calif.), who pitched it at Ways and Means yesterday as a way to pay for infrastructure.

"Nobody argues that a carbon tax is a silver bullet that solves the problem on its own, but a price on carbon is an indispensable component to solving the problem," Peters told the committee.

"We’ve talked at length in Congress about an ambitious multitrillion-dollar infrastructure initiative, and historically we have funded those programs by raising the federal gasoline tax," Peters added. "We could raise that tax again, but at this point, an upstream carbon tax makes much more sense."

"If we want to achieve cuts in carbon emissions that are necessary to stave off the devastating impact of climate change, it’s essential we put a price on carbon," Deutch told the panel. "The Ways and Means Committee has the central role in this issue."

Speaking to reporters across the Capitol, Senate Finance Chairman Ron Wyden (D-Ore.) signaled yesterday that he will be looking at international tax reform as a pay-for for infrastructure.

He decried the "inherently contradictory and bizarre approach many Republicans are taking: They’re saying the bills need to be paid for, and then they won’t support any pay for it."

Wyden also sidestepped a question about the reported $3 trillion figure the White House is looking at for infrastructure. "At this point, I’m not plucking any numbers out of the air," he said.