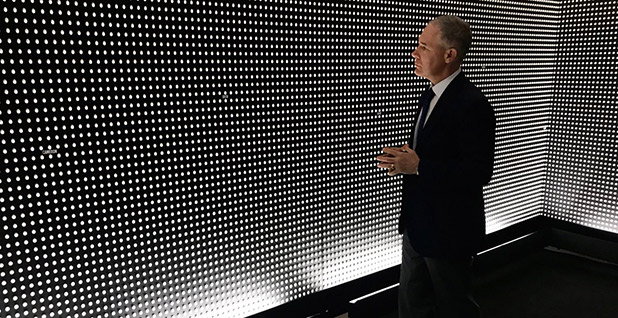 Congressional Republicans continue to praise EPA Administrator Scott Pruitt’s deregulatory push at the agency, but there’s increasing concern that his recent ethical missteps may hamstring his ability to further that agenda.

"He has done an excellent job. Certainly, in a state like mine he is a welcome change from what was there [at EPA] before," Senate Majority Leader Mitch McConnell (R-Ky.) told reporters yesterday.

But McConnell stopped short of saying Pruitt should continue in his post amid questions about the EPA chief’s spending on travel and security and his apartment lease in Washington, D.C.

Instead, McConnell said, "It’s really up to the president to decide who his team is and whether he wants to continue the EPA administrator."

Meanwhile, other key energy lawmakers on both sides of the Capitol also said yesterday that Pruitt’s scandals are undercutting his work at EPA, which they strongly support.

"For us he has a great record of policy, we’re very happy," said Rep. John Shimkus (R-Ill.), the chairman of the Energy and Commerce Subcommittee on Environment.

"I’ve always said I’m a big Scott Pruitt fan," Shimkus said. "But these unforced errors are taking away from the narrative of what a lot of us perceive as a good job of reforming the agency, keeping it focused on protecting the environment while creating jobs. That’s what we want, that’s what he’s been doing, but that’s not what you guys are asking about."

Sen. Lisa Murkowski (R-Alaska), the chairwoman of the Senate Appropriations subcommittee on Interior-EPA, offered a similar assessment. "I think it’s distracting from the day-to-day work and operations that goes on," she said.

Murkowski said Pruitt owes an explanation of reports of excessive spending, including the infamous phone booth that was installed in his office (Greenwire, April 16).

"I do think it’s appropriate that all of these expenditures, particularly those that have been called into question, should be very, very carefully scrutinized," said Murkowski, adding that she "absolutely" expects him to appear before the Appropriations subcommittee she chairs at a yet-to-be-scheduled budget hearing.

Senate Environment and Public Works Chairman John Barrasso (R-Wyo.), who recently queried Pruitt about his use of multiple email accounts, said he’s not ready to hold hearings on the beleaguered administrator.

"I want to wait and see what the White House comes out with first," he said yesterday.

Shimkus said Pruitt’s appearance next week before the Energy and Commerce Committee will provide a forum for lawmakers seeking answers about the EPA chief’s tenure.

"People are going to get their shot at him, whether it’s on policy or politics or stewardship," he said. "It’s all fair game."

Rep. Gregg Harper (R-Miss.), the chairman of the Energy and Commerce Subcommittee on Oversight and Investigations, said he has no plans to investigate Pruitt.

"I know there are a lot of folks looking at that. We’re dealing with a lot of issues, and we’ll let that run its course," said Harper, adding that it’s "always the decision of the president" to determine who serves in his Cabinet.

Other Energy and Commerce Republicans expressed concern that Pruitt has yet to address many of the questions raised by the agency’s own inspector general about his travel and security spending and living arrangements. They, however, also stopped short of calling for him to step down or for a investigation by their panel, saying they are waiting for his response.

"I am concerned about it," Rep. Morgan Griffith (R-Va.), an E&C member, said yesterday. "Are these just getting used to the job missteps, or is it a pattern? I just don’t really feel comfortable with an answer on that yet."

"Certainly he has a responsibility to answer the questions fully, and he has not done [that] so far," Lance said yesterday. "I think that [resignation] is a possibility. But I favor giving everyone an opportunity to respond to the questions."

Separately, the House Oversight and Government Reform Committee has requested a lengthy list of documents from Pruitt regarding travel and security spending and is seeking interviews with top EPA aides. The panel has given the agency until April 27 to provide that information and arrange interviews.