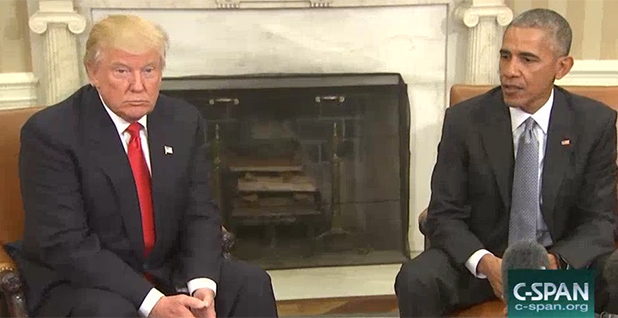 And any effort by Trump’s U.S. EPA to rescind or revoke major scientifically based rules — like the air standard for ozone pollution — would be met with a barrage of lawsuits.

"Lots of threats of this kind have come in the past," said Jody Freeman, a Harvard Law School professor and former climate adviser to President Obama. "Virtually every Republican administration comes in and says they want to deregulate. But when the rubber hits the road, there is little of it."

To be sure, Congress can pass legislation revoking any environmental regulation it wants, and that may be the way forward for Republicans who will now control the White House, House and Senate.

And Trump can unilaterally withdraw or abandon commitments under the Paris Agreement on climate change, which would significantly undercut the Obama administration’s policies.

But history suggests that presidents have rarely sought to rescind earlier regulations under their own executive power. When they do, several legal scholars said, they run into problems — including two Supreme Court precedents.

And when Bush tried, he often failed. The prime example was his attempt to undo the Clinton administration’s roadless rule, a Forest Service regulation adopted in the final days of the administration. It prohibited most road construction, logging and mineral leasing within 58.5 million acres of national forests across the United States.

The Bush administration officially repealed the rule in 2005 and replaced it with a state petition rule, but that sparked a decade of litigation that ultimately ended when a federal appeals court struck down the Bush reversal last year (Greenwire, July 30, 2015).

Similarly, the Bush EPA made moves to alter or rescind air regulations and Clinton’s drinking water standard for arsenic.

Those moves and air rules led to countless legal challenges, and the Bush administration rarely prevailed.

"They had a horrific record at the [U.S. Court of Appeals for the District of Columbia Circuit] when it came to defending air pollution rules," said Jonathan Adler, a professor at Case Western Reserve University School of Law.

And when Bush’s EPA attempted to move away from the Clinton drinking water standard for toxic arsenic, it faced significant public pushback. The agency reversed itself within a year, eventually backing the Clinton standard.

Under Supreme Court precedent, new administrations cannot rescind regulations with the stroke of a pen.

Two cases speak directly to the issue. In both, the high court ruled that an agency must provide a detailed explanation explaining a change in policy.

The court held unanimously that the administration’s decision was arbitrary and capricious because it did not adequately explain why the rules were no longer needed.

The agency "failed to present an adequate basis and explanation for rescinding the requirement, and must either consider the matter further or adhere or amend the Standard along lines which its analysis supports," the court said.

The court held 5-4 that an agency must defend the justification for a policy change — just as it must for a brand-new rule. (Notably, the opinion was written by the late Justice Antonin Scalia, and there was disagreement on the bench about whether policy changes require more extensive explanation than original rules. Scalia and the court held narrowly that they don’t.)

Taken together, the rulings mean that if the Trump EPA decides to rescind Obama’s rules, his administration will have to go through the same notice and public comment procedures that new rules require. That process can take years, and it’s resource-intensive.

"You’ve got to go through a rulemaking process," Adler said. "You’ve got to acknowledge that you’re changing your opinion. And you’ve got to explain why your new decision is reasonable."

Vermont Law School professor Pat Parenteau said those opinions mean that Trump can attempt to take sweeping actions in his early days in office, but they may not hold up in court.

"They can create chaos," he said. "But if they want to prevail in court in repealing rules, it’ll be a steep climb."

With some major Obama EPA rules, Trump would likely face pushback from industry. Utilities, for example, have nearly completed implementation of the Obama administration’s landmark 2012 air standards for mercury and other hazardous air pollution — a rule that was heavily litigated.

"You clearly have an opportunity here to pull back on that," said Lorenzen, who now works for the firm Crowell & Moring. "But I could see some in industry, who have already made the investments in those scrubbers and other technologies, saying, ‘That’s unfair to us.’"

For example, the origins of Obama’s mercury rule actually date back to the Clinton administration.

In 2000, Clinton’s EPA concluded that it was "appropriate and necessary" to regulate emissions of mercury, arsenic, cadmium and other pollutants — a threshold determination under the Clean Air Act that began the rulemaking process.

Bush’s administration, however, reversed that decision in 2005. A court then overturned that change when environmentalists sued.

Obama’s rule came after his administration reinstated the "appropriate and necessary" finding.

"What tends to get administrations in trouble is when they try to take shortcuts," Adler said, referencing the Bush mercury rule reversal. "That’s what leads to situations where courts say you can’t do that."

All of those precedents suggest that any effort by Trump’s EPA to undo Obama policies on everything from air rules to endangered species listings to grazing regulations would be complicated.

"This doesn’t mean you can’t do it," Lorenzen said. "But there are complexities that I think people aren’t really thinking about."