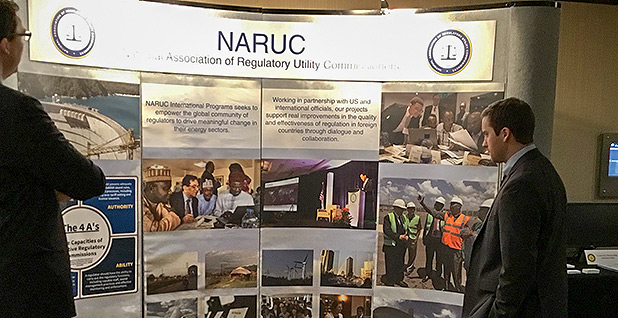 The winter meeting of the National Association of Regulatory Utility Commissioners is underway in Washington, D.C. @NARUC/Twitter

The electric grid industry’s leading research organization is drafting a visionary blueprint for a dramatic increase in electricity use, as electrons push carbon molecules aside in transportation, building climate control, industrial processes and food production.

For the Electric Power Research Institute to advocate for electric vehicles and advanced heat pumps is hardly remarkable, but key to EPRI’s most ambitious view of the potential for the economy’s deep electrification is persuading their own industry members, as well as its regulators and policymakers, to buy into the vision.

"This is a window of opportunity" if utilities change their business models to adopt electrification strategies quickly enough, said Arshad Mansoor, EPRI’s senior vice president for research and development, speaking to the National Association of Regulatory Utility Commissioners’ winter meeting in Washington.

EPRI will release the first results of its national assessment of efficient electrification in the U.S. in April. Mansoor gave a preview yesterday.

EPRI will chart four future paths of progressively greater electrification, Mansoor said, from a business-as-usual scenario of growth on a current pace, to a "transformation" path in which electricity’s share of total energy supply rises from 19 percent today to 50 percent by 2050. Electric vehicles’ share of the transportation sector climbs to 40 percent by 2050 in the high-growth path as EV adoption gains both in passenger vehicles and heavy-duty trucks.

That most aggressive scenario assumes continuing increases in fossil fuel costs and a federal policy to sharply reduce carbon dioxide emissions that could play to the growth of zero carbon power generation.

Assuming continued growth in U.S. wind power capacity, more utilities will be offering the energy from electric power to customers for free at nighttime, but those utilities must be able to get a fair, sustainable rate for their systems’ infrastructure that supports renewable energy, Mansoor said — no easy bargain to strike politically, to this point.

Mansoor said that in EPRI’s assessment, an imposed charge on CO2 emissions to reduce climate change damage is not the significant driver in increased the growth of EV sales. In EPRI’s outlook, oil-based fuels become increasingly expensive. "Electrification of transportation is driven much more by technical change," he said.

A continuing trend toward computer-assisted driving or self-driving technologies will play to the advantages of EVs, Mansoor said, because of their more precise operating controls, compared to conventional internal combustion engines.

Among the benefit is the ability of electric-powered indoor agriculture to deliver produce with less reliance on chemical fertilizer, while also using 90 percent less water. Paper mills could dry products with infrared heating instead of fossil fuel heating, he added. Advanced heat pumps save customers money and are more adaptive to flexible grid operations than oil and gas heating, he said, previewing the industry’s policy case.

Mansoor said that in the transformation scenario, natural gas use declines overall but increases for electricity generation, assuming the success of carbon capture and storage. Gas demand for electricity generation increases by 65 percent by 2030 and doubles by 2050, lifting total gas consumption across the economy to 18 percent through by 2030 and 2050.

These changes come at petroleum products’ expense. In the transformation outlook, petroleum use drops by 28 percent in 2039 and 63 percent in 2050, a prediction that will put more energy into the policy fuel wars in Washington.

The research will present estimates of "costs, benefits and opportunities" for increased use of electric power across the economy, including carbon emission reduction and large-scale conservation of water supply.

On the opposing side, other NARUC speakers yesterday noted the risk that expansion of electrification — with fast-growing cloud-based applications and the proliferation of the "Internet of things" — increases potential cybersecurity attack points on grid infrastructure.

Kenneth Colburn, U.S. program director for the Regulatory Assistance Project (RAP), another NARUC speaker, was on Mansoor’s side. RAP is advocating what it calls a "beneficial electrification" program that points to the benefits of new, flexible grid assets such as batteries, "smart" electric water heaters and heat pumps, and electric vehicles whose batteries are connected to charging stations that can return some of the vehicle’s power to the grid when demand is greatest.