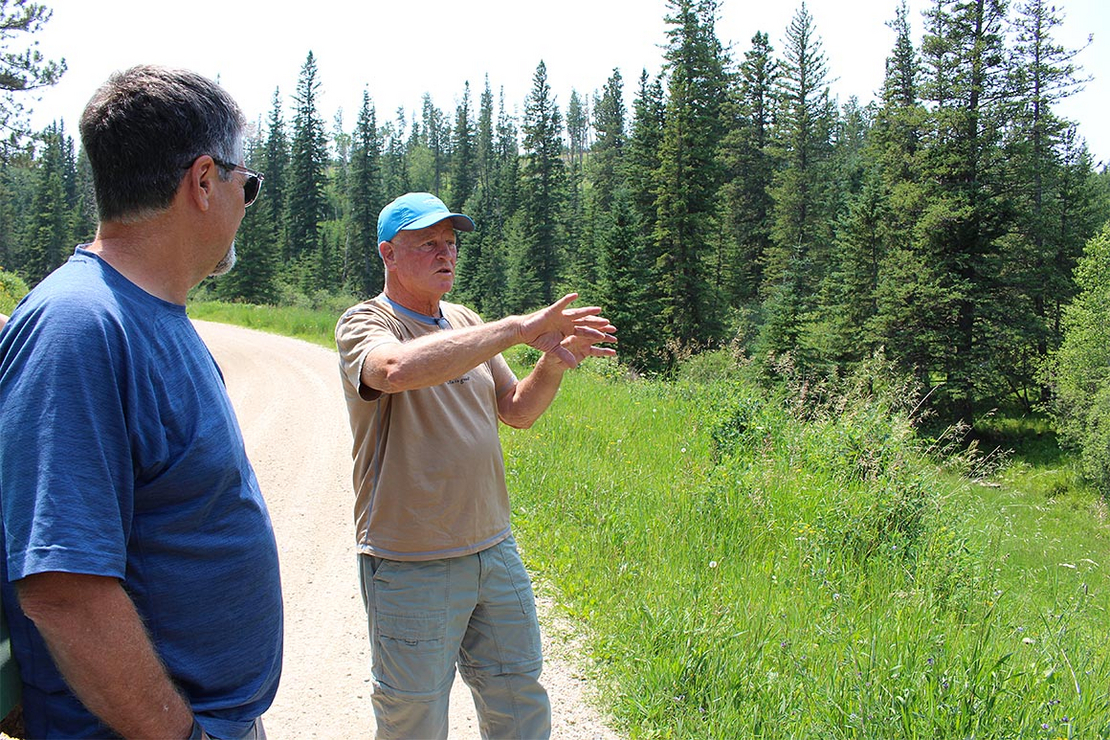 Jim Furnish, right, a former deputy chief at the Forest Service, makes a point with Dave Mertz, a former natural resources officer with the agency, on a visit to the Black Hills National Forest. "The Forest Service managers are not keeping up with the real world," Furnish said. Marc Heller/E&E News

Furnish, 75, has spent his post-agency days speaking out on forest policy — mistakes, mainly, being made in Washington, he says — and promoting an autobiography, "Toward a Natural Forest," he wrote in 2015.

Now he’s helping lead a campaign to reduce timber harvesting in the Black Hills National Forest in South Dakota and Wyoming. The Forest Service there is in danger of exploiting the forest and jeopardizing its future beauty, as well as its ability to produce wood products over the long run, Furnish said.

"I’m kind of the turd in the punch bowl," he quipped.

In a baseball cap, T-shirt and jeans, Furnish has long since ditched the dark green colors of his former agency, where he was second in command from 1999 to 2002. He led E&E News on a tour of the national forest recently, joined by other, more recent, Forest Service retirees who share his view that timber targets must be reduced in the Black Hills and that the agency to which they devoted their careers has gone astray.

At this point, he may be more outspoken than ever. The Trump administration’s moves to increase timber production conflict with policies he helped implement during his career, most notably the Roadless Area Conservation Rule that prevents timber development in parts of Alaska’s Tongass National Forest and other areas deemed too pristine to cut. He said he worries the Biden administration may not veer far enough from the Trump approach, especially in the Black Hills, a big timber producer since the beginning of the last century.

"In my view, the Forest Service managers are not keeping up with the real world," he said.

For his outspokenness — and for his memoir — Furnish has received a cold shoulder from agency officials and others. No other group, perhaps, is more rankled than former officials who make up the National Association of Forest Service Retirees, said Andy Stahl, executive director of Forest Service Employees for Environmental Ethics, who’s known him since Furnish’s days as a forest supervisor in Oregon in the mid 1990s.

"They hate him," Stahl said. "He’d be more reviled in that group than anyone I can think of."

But to groups looking for a shift in Forest Service policies away from heavy logging, Furnish is something of a hero. The Dogwood Alliance, an environmental nonprofit based in Asheville, N.C., and Defenders of Wildlife invited him to speak there in 2017, calling Furnish a "dyed-in-the-wool logging forester transformed into an environmental agent of change within the agency."

He’s vice president of the board of directors at the Geos Institute, an Ashland, Ore.-based consulting group focused on climate change and environmental protection. And he has served on the advisory board of the Western Environmental Law Center.

Furnish said his environmental viewpoint is rooted in his Christian faith. He said he’s in the "if you love God, you need to love his creation" camp.

"I confess, I am idealistic," Furnish said. "I’ve spoken out because I think the Forest Service has been sitting on its hands."

Furnish arrived at the Forest Service in 1965 by what he calls "an extremely traditional way," studying forestry at Iowa State University, where there’s a scholarship named after him — and developing a passion for the land. He graduated from Iowa State as an undergraduate in 1968.

In a 34-year career with the Forest Service, he rose to supervisor of the Siuslaw National Forest in Oregon, where he ran into issues such as clear-cutting on eroding landscapes and protection of the northern spotted owl. Those controversies helped him cross paths with Stahl, who’d sued the Forest Service to stop the clear-cutting.

The Suislaw had been one of the top national forests for timber, and Furnish was surprisingly open to stepping that back, Stahl said. "Jim was remarkable," he said.

Furnish went on — without asking permission from the Forest Service — to help produce a 30-minute documentary called "Torrents of Change"that detailed the damage in the Suislaw from flooding rains in 1996 and called for a new focus away from timber harvesting and toward protecting the landscape.

Although his independence irked the public affairs office, he said, Furnish’s effort caught the attention of Mike Dombeck, who became Forest Service chief in 1997. Dombeck promoted Furnish to deputy chief, irritating regional foresters who’d outranked him, Stahl said. "You don’t get to go from forest supervisor to deputy chief," he said.

Furnish retired in January 2002, bothered that the George W. Bush administration was backing away from the roadless-area protections he’d helped engineer (Greenwire, Nov. 2, 2001).

"I think Jim’s doing what Jim has always done: exaggerate and cry fowl no matter the reality," said Ted Stubblefield, a former forest supervisor at the Gifford Pinchot National Forest, in comments posted this month to "The Smokey Wire," a forest policy blog that published an interview Furnish had done with South Dakota Public Broadcasting, about the situation in the Black Hills.

"In my opinion, Jim is so far into the ‘environmental camp’ that it’s hard for him to see the good ‘in a thing,’" Stubblefield said in the post. "For many of us, what the combined agencies in the Black Hills have done ‘for long term health of the forests,’ is a good thing."

Forest Service retirees have disagreements with Furnish, to be sure, said Steve Ellis, a former forest supervisor and senior official at the Bureau of Land Management. But the differences are over policy, and the retirees "strive to be mindful of differing viewpoints," said Ellis, the retiree association’s chair, in an email.

"This Black Hills matter may be another one of those," Ellis said.

He hasn’t read Furnish’s book, Ellis said. "I have read other of Jim’s opinion pieces over the years, sometimes I agree with him, sometimes I don’t. On a positive note, they always stimulate healthy discussion!"