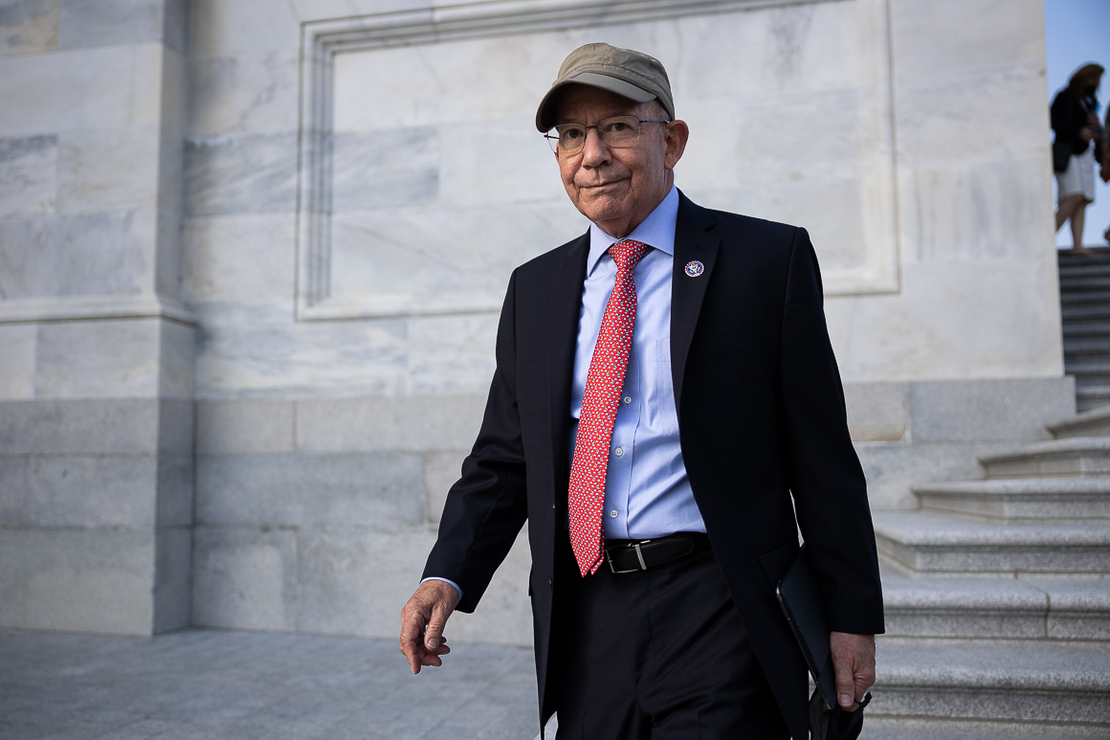 House Transportation and Infrastructure Chair Peter DeFazio (D-Ore.) will retire at the end of his current term in the House. Francis Chung/E&E News

While Oregon Democratic Rep. Peter DeFazio stunned many in Washington with his retirement announcement yesterday, he’ll leave behind a career of more than three decades fighting for big infrastructure and climate change spending.

DeFazio, 74, who said he would leave Congress at the end of his term in January 2023, described the passage last month of the bipartisan Infrastructure Investment and Jobs Act and the expected passage of the “Build Back Better Act” as the culmination of his 36-year career in the House.

As chair of the Transportation and Infrastructure Committee since 2019, he played a starring role in crafting both pieces of legislation — which contain some provisions of his “Moving Forward Act” that House Democrats passed last year.

“The biggest thing I’ve always wanted to accomplish was a major increase in investment in America’s crumbling infrastructure. I started on that quest in the first term of the Obama administration. And finally, it culminated in the Infrastructure Investment and Jobs Act this year,” DeFazio told local Oregon reporters yesterday, following the announcement.

“Not exactly the policies I wanted, not as much money as I wanted, but the largest-ever single investment in infrastructure. And Oregon will be a tremendous beneficiary,” he said.

But infrastructure is not the only area in which DeFazio sought to cement as his legacy. He’s helped protect areas under the Wild and Scenic Rivers Act and, early on in his career, worked to pass a ban on exporting timber cut on federal lands, a provision meant to protect old-growth forests.

He wants to travel over some of the areas he’s worked to protect, he told reporters.

“I want to go hike Devil’s Staircase again. Copper Salmon. The expansion of the Oregon Caves, which I worked on for more than 20 years to protect. The only underground wild and scenic river in the United States, the River Styx. The Steens Monument. The Newberry Volcanic Monument,” he said.

DeFazio was a longtime senior member of the Natural Resources Committee, and briefly its top Democrat, though he’s been on Transportation and Infrastructure throughout his House career.

Environmental activists count DeFazio as a key ally, and his departure as a loss for their cause.

“Chairman DeFazio is one of Congress’ all-time greatest champions for wildlife, public lands, and healthy waterways — and a true friend of the National Wildlife Federation,” Collin O’Mara, the organization’s president, said in a statement.

O’Mara cited DeFazio’s work on the infrastructure package, which included $350 million for wildlife crossings "and other critical investments in water and natural climate solutions,” he said.

“We are all indebted to Chairman DeFazio for his leadership and congratulate him on his well-deserved retirement after a career of commitment to wild places, the wildlife that call them home, and tireless work on behalf of public health and safety."

In yesterday’s talk with reporters, DeFazio said he’s still got some tasks left to accomplish on climate in his final year in office, mostly around passing the “Build Back Better Act” and making sure the Biden administration carries out the bipartisan infrastructure bill in a way he wants.

“We’re going to shape that money in a way that deals more meaningfully with climate change and resilience and greenhouse gas reduction than the Senate bill, which left out some of the most important provisions,” he continued, referring to the bipartisan infrastructure bill.

“Chairman DeFazio is known and respected by all as a champion of sustainable, smart and green infrastructure, whose progressive values, passion and persistence have helped rebuild America and the middle class,” she said.

DeFazio is leaving his southwest Oregon district at a time when Republicans are hoping for a wave election. He has been a major target of the GOP in the past, but Oregon lawmakers redrew his district this year to make it more favorable to Democrats.

The National Republican Congressional Committee boasted about DeFazio’s retirement — the 18th House Democrat to call it quits this year — as a sign that the GOP will take the chamber’s majority next year.

“Committee Chairs don’t retire unless they know their majority is gone. Nancy Pelosi’s days as Speaker are numbered,” NRCC spokesperson Courtney Parella said in a statement.

“I think the Republicans are measuring the curtains a little too early,” DeFazio said of the GOP’s hope for taking the House majority. “Having overconfidence on the other side of the aisle is always good.”

Alek Skarlatos, an Army National Guard veteran who rose to fame in 2015 for stopping a gunman on a Paris-bound train, is running for DeFazio’s seat, as he did last year. Skarlatos staked that campaign in part on a promise to revive the timber industry that once dominated southwest Oregon (E&E Daily, June 12, 2020).

DeFazio beat Skarlatos in the 2020 election, but it was the Democrat’s toughest race, and the most expensive in Oregon’s history.

“After 36 years of failure — burning forests, poorest congressional district in the state, partisan policies that have destroyed southwest Oregon — and turning his back on the people he was elected to serve Peter DeFazio is retiring,” he tweeted yesterday.

Skarlatos is the only major Republican to enter the race so far.

“Oregonians need a continuation of Peter’s strong, experienced leadership, especially in these challenging times,” she said in a statement.

Sara Gelser Blouin, a state senator, is also said to be considering running, though she has not made an announcement.

DeFazio didn’t endorse a successor but said he’s confident a qualified Democrat will step forward and will ultimately win.

“We need someone who’s strong, accomplished, qualified, hopefully with experience in the public sector and policymaking,” he said.