Retracing the footsteps of Lamar Smith in Alaska 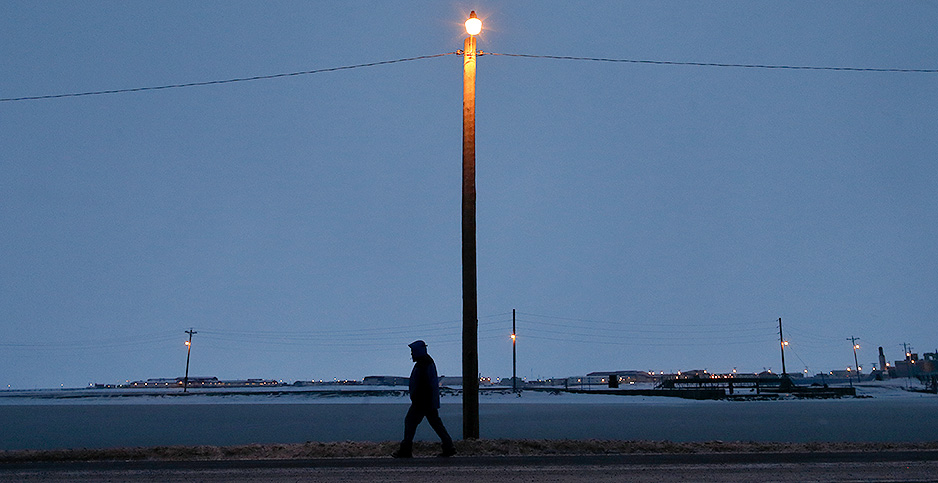 A figure walks in the weak light of a still sunless late morning on a street in Utqiagvik, Alaska. Gregory Bull/Associated Press

UTQIAGVIK, Alaska — Rep. Lamar Smith saw good news when visiting one of the places in America most threatened by climate change. Not many share his vision.

Smith, the Texas Republican who chairs the House Science, Space and Technology Committee, led a bipartisan delegation to the Arctic in May with nine lawmakers. Their first stop was here in the northernmost point of the United States, in a town that is measuring its future in decades, not centuries.

The trip brought some of Congress’ most outspoken opponents of climate science to the front lines of global warming. Local people who welcomed the politicians can trace their Iñupiat ancestry back millennia, and they see their land shrink by dozens of feet each year. It’s devoured by the Arctic Ocean.

The trip did not shift Smith’s position on climate change. He remains unconvinced by the overwhelming assertion by scientists that humans are ratcheting up world temperatures. That rate of warming happens twice as fast here.

"The pace and permanence of current climate variations, as well as the causes, still aren’t fully understood," Smith wrote in response to questions from E&E News last week. "We should continue the data-gathering and analytical work that will improve our understanding of complex climate dynamics."

To stand in Utqiagvik is to be inside a terrarium of global warming, no matter the season. The congressional delegation drove down dirt roads over permafrost that routinely get washed away in storms, which blow more intensely and for a longer period of the year than they used to.

Along the way, the delegation passed the primary electrical grid substation for the village, which sits on the edge of a violent ocean that inches closer every year. The lawmakers would have also seen some houses falling off crumbling cliffs. They rode by the freshwater lake that provides water for the village of 4,500 people. Many worry that it could be inundated by salty seawater in the next storm, because it’s just barely above sea level.

Earlier this month, a routine storm cut off access to a neighboring town’s sewage lagoon, and residents had to dispose of their waste in buckets carried to the beach. Each storm arrives with similar threats.

It’s difficult to find anyone living in Utqiagvik who doesn’t think climate change poses an existential threat. And yet, since their return, the lawmakers have publicly expressed a variety of impressions of their trip, none of which signal that it changed their minds on climate change.

Smith saw the good news in his journey. He applauded increased shipping opportunities created by retreating sea ice. And he touted the benefits of more carbon dioxide because it could help plant life.

Rep. Frank Lucas (R-Okla.), who may become the committee’s chairman after Smith steps down next year, said the visit didn’t change his mind about climate change, which he questions. But it did make him want to invest more taxpayer money to gather data about the region.

"My main takeaway was that I think we need to invest more in gathering data, whether it’s more stations on the ground up there or in the air, but more data collection so that we can have more facts," he said. "In the committee, we have this great ongoing discussion between the perspective of global warming, pro or con. My personal perspective has always been we need more information and the information that we can collect and the way we can process it, whether you are concerned about long-term weather pattern analysis or short-term, immediate weather analysis."

Rep. Brian Babin (R-Texas), who would later be trapped in his Houston house by the rising floodwaters of Hurricane Harvey, saw in the Arctic a continuation of global heating and cooling trends.

"We are having some climate change, there is no doubt about that," he said. "I think the big question is what is causing it, and if you look back over the millennia, we’ve had warming and cooling cycles before."

Other Republicans on the trip included Reps. Chris Collins of New York, Neal Dunn of Florida and Mark Sanford of South Carolina. Among the Democrats were Reps. Jerry McNerney and Ami Bera of California and Henry Cuellar of Texas, according to BuzzFeed, which first broke the news of the unpublicized trip.

Smith has made a rejection of climate science a key piece of his leadership on the committee. He has said relatively little about his trip to the front lines of climate change. Since returning, he wrote an op-ed for the conservative Heritage Foundation titled "Don’t Believe the Hysteria Over Carbon Dioxide." In it, he asserted that warming has benefits, including the development of new commercial shipping lanes in the Arctic.

The purpose of the trip was to see firsthand what scientists and researchers are doing in the region and to ensure that federal funds are spent properly, Smith said last week. He came away convinced that money is being spent wisely. Smith, whose office would only respond to emailed questions, wrote that it was "impossible to know" if the United States has been spending too much or too little on Arctic research.

When E&E News asked Smith whether local residents told him about their fears regarding climate change, he answered that their biggest concern related to letting health and environmental issues be guided by the community, not Washington.

"The federal government should be a partner, supporting local communities, not presume to dictate policy for a region of the country that few in Washington would understand," he wrote. "Technology and innovations, rather than higher energy taxes and more regulations, are the solutions to addressing climate change."

Residents of Utqiagvik don’t see climate change as beneficial. Declining sea ice has made whale hunting more dangerous and has led to an acceleration of erosion that is now claiming ancient homes of their ancestors. Waves wipe away 30 feet of shoreline every year on average. In bad years, it can take 100 feet. What’s more, increased shipping would threaten hunting traditions that date back millennia and would bring more pressure for offshore drilling, residents said.

"Have we presented a template to other nation-state actors in a transnational way to show them the vulnerabilities we have here?" Duxbury asked. "We have a population from other nations showing up and taking pictures and being in places where you go, ‘Hmmm … it sure looks like something we should be paying attention to so it doesn’t become something it shouldn’t.’"

The people who inhabit this thawing sliver of American Arctic don’t reflect Washington’s predictable political divide on climate policy. Utqiagvik is hardly the type of town that embraces environmentalists, who are viewed by many residents as a threat to their subsistence whale hunts and to their revenue from the energy industry. Washington is seen as a dark place that imposes limits on food sources because people don’t understand or value Iñupiat traditions. The money earned from energy drilling is essential to the town’s functioning.

It’s expensive to live in the Arctic, a place with no road access to the rest of the country and where everything, from drywall to nails and sewer pipes, is flown in or brought by ship at prices that are often four or five times higher than elsewhere in Alaska. Without energy revenue, Utqiagvik could hardly exist. Much of the town’s $400 million budget comes from oil and gas, and some locals want to expand drilling.

The delegation visited the electric utility that serves this area. It maintains the utility corridor, or utilidor, a marvel of modern engineering that allows fresh water, and human waste, to flow all year in a region that can hit 40 degrees below zero. The utilidor is a 6-foot-tall heated tunnel of pipes built into the permafrost. It provides indoor plumbing here — one of the last places in the United States to receive it. It’s also threatened by climate change and becoming prohibitively expensive to maintain, because the permafrost is thawing more rapidly and the heaving ground breaks pipes and rips away their connections to homes.

The delegation saw those challenges, which clearly show that climate change is a threat, said Yves Brower, chief operations manager at Barrow Utilities and Electric Cooperative Inc. Bringing back a positive message about the threat faced by local people ignores the obvious signs of global warming that are everywhere in town, he said. It’s easier to ignore the dangers of climate change if you live in other places of the United States where daily life doesn’t present a constant reminder of the threat, he added.

"Some people are dense when confronted by the facts, and they can make up their own opinion," Brower said. "It’s pretty easy if you live in Texas."

Utqiagvik provides a view into the planet’s climate future, as warming here has occurred at double the pace of everywhere else. At the edge of town, in a little yellow hut on the tundra, one of the most important data points for measuring how humans are warming the planet is gathered. The NOAA facility is one of just a handful of places where atmospheric CO2 levels are measured. The number has risen so steadily in the last few decades that current levels have not been seen in 800,000 years.

On the trip, Smith was curious about climate science and asked some researchers about implications of rising CO2 levels.

Smith has staked out a position on global warming that acknowledges it is happening and that humans have some role. But he says the exact amount of change is uncertain, so strong regulations on carbon emissions do more harm than good.

NOAA’s measurement of CO2 shows that it has grown "dramatically faster" since the Industrial Revolution, said Bryan Thomas, station chief of the Barrow Observatory. Thomas, who was only authorized to speak about scientific findings and not about the lawmakers’ visit, said the data gathered in Utqiagvik have troubling implications, because they suggest that the worst warming is yet to come. Every year, humans are increasing the total amount of atmospheric carbon dioxide, which traps heat.

"Temperature is a lagging indicator. Temperature happens after, because the carbon dioxide is the blanket, but until you get the heat trapped underneath it, the temperature doesn’t go up," he said. "So you’re putting more and more down feathers into that blanket, and you’re making that down blanket more and more effective as an insulator, but that temperature rise is happening later."

Republicans and Democrats on the trip talked about climate change and found some common ground on climate science, largely on the subject of geoengineering, said McNerney, one of the Democratic lawmakers.

Republicans, he said, were particularly interested in the potential security implications of the NOAA CO2 data facility, which is sensitive enough to monitor spikes in emissions from manufacturing in Russia and China. He saw how the changed climate has filled many people in town with dread.

"They see the ice receding, they see mosquitoes, never seen them before, so people there understand that there is something big happening and they’re nervous, they’re worried about it because it’s going to affect their lives," McNerney said.