Rick Perry: Advocate or part of ‘cancer of wrongdoing’? 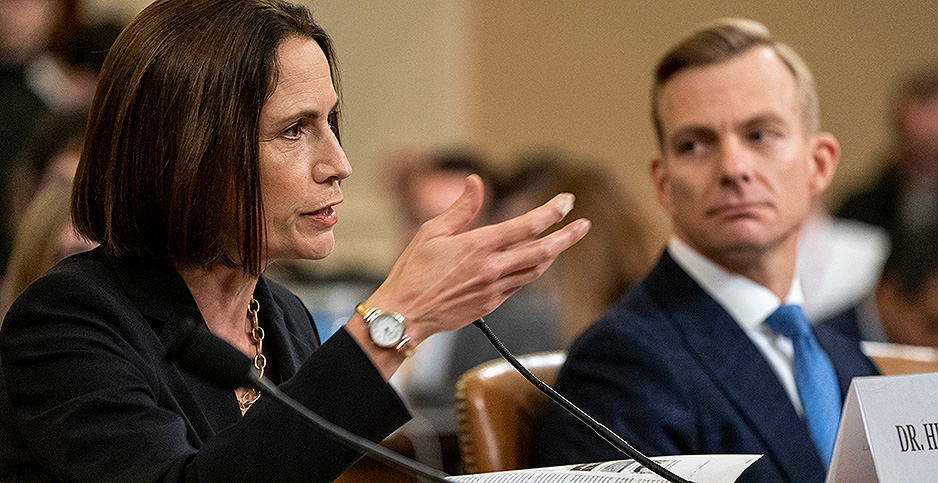 House Democrats expressed worries yesterday about outgoing Energy Secretary Rick Perry’s role as one of the "three amigos" directed by President Trump to steer Ukraine policy, but he’s unlikely to face more scrutiny as impeachment investigators maintain a focus on the president.

Democrats in a fifth day of testimony yesterday said they’re concerned about Perry’s interaction with Ukrainian officials, particularly an incident in which he handed new Ukrainian President Volodymyr Zelenskiy a list of potential American energy advisers. Perry has said that the list of experts he offered to the Ukrainians was merely a suggestion to help the country improve its state-owned energy company, Naftogaz.

But Rep. Joaquin Castro (D-Texas) asked to include in the congressional record an Associated Press report that said the list included a Perry donor who later received a potentially lucrative contract for oil and gas exploration from the Ukrainian government.

Castro’s remarks came after David Holmes, a State Department employee at the U.S. Embassy in Kyiv, testified that he saw Perry give the list to the new Ukrainian president and described them as "people he trusts."

Perry told Zelenskiy that he could "seek advice from the people on this list on issues of energy sector reform," Holmes said (Energywire, Oct. 18).

Holmes noted that Perry had held a number of meetings on energy with "key Ukrainian energy sector contacts" but that Perry’s staff excluded embassy personnel from some of those later meetings. He called the practice of excluding embassy staff "very rare."

The Department of Energy has said that Perry did not advocate for any one individual, and the donor, Michael Bleyzer, told the Associated Press that Perry played no role in helping his firm win a competitive bid.

Rep. Raja Krishnamoorthi (D-Ill.), a member of the Intelligence Committee, said in an interview outside the hearing that he had concerns that Perry’s list could include campaign donors acting in their own or other interests, not those of the United States.

"That’s what happens when you have a shadow foreign policy," Krishnamoorthi said. He called Perry’s list an example of the broader "pressure scheme" that Democrats say Trump waged against the Ukrainian government as he withheld an Oval Office meeting and military aid in a bid to convince the government to announce that it would investigate his political rival, former Vice President Joe Biden.

But the Illinois Democrat said he did not know if the committee would hold additional hearings related to Perry’s efforts, saying it wanted to move ahead with the impeachment inquiry.

Democrats say there has been no change in Perry’s status as a witness, despite being drawn deeper into the inquiry this week. The Energy chief, who is stepping down Dec. 1, has refused a subpoena to appear and has not signaled any interest in reconsidering it.

He has maintained his role in the Ukraine outreach effort was based solely on his energy expertise and that he never heard anyone mention the words "Biden" or "Burisma" — the Ukrainian energy company that once hired Biden’s son Hunter.

Democrats privately suggest they want to keep the impeachment push tightly focused and believe this week’s sessions provided them the evidence they need to pursue impeachment without seeking additional details on Perry’s dealings. They also concede some witnesses have described Perry as having a legitimate role in Ukraine given U.S. energy interests there (E&E News PM, Nov. 8).

Fiona Hill, Trump’s former top Russia expert, said she recommended that Perry lead the U.S. delegation to Zelenskiy’s May 20 inauguration, "given his role as secretary of Energy and also his deep knowledge of the energy industry."

Herself the daughter of a coal miner, Hill called Perry an "extraordinarily good advocate of U.S. interests, particularly in the energy sphere," noting that energy is an "Achilles’ heel" for the nascent democracy.

"Ukraine remains, for now, the main transit point for Russian oil and gas and pipelines to Europe, and this has been manipulated repeatedly, especially since 2006, by the Russian government," she said.

Hill spent much of her testimony warning against Russian interference in U.S. politics and agreed with Rep. Mike Conaway (R-Texas) when he asked about whether a ban on fracking in the United States would play into Russia’s hands. She said she sat next to Russian President Vladimir Putin at a conference at which he made that point.

"He started in 2011 making it very clear that he saw American fracking as a great threat to Russian interests," Hill said.

Holmes, though, painted a more complicated picture of Perry’s involvement.

Holmes said that Perry, Sondland and Volker "styled themselves as the ‘three amigos’ and made clear they would take the lead on coordinating our policy and engagement with the Zelenskiy administration."

With Ukraine besieged by an aggressive Russia, embassy staff were trying to coordinate a White House visit for Zelenskiy, Holmes said, talking with the Ukrainian government about commercial deals, anti-corruption efforts and energy sector reforms in an effort to entice Trump.

Those efforts, though, didn’t appear to be "making a dent" with Trump, who remained skeptical of Ukraine.

Weeks later, however, Holmes said then-acting U.S. Ambassador to Ukraine William Taylor told him that on a June 28 phone call between Zelenskiy, Taylor, Perry and the others, it was "made clear that some action on a Burisma/Biden investigation was a precondition for an Oval Office meeting."

In September, Holmes said Taylor told him "now they’re insisting Zelenskiy commit to the investigation in an interview with CNN."

Holmes said he interpreted the "they" to mean Perry, Volker and Sondland, and said he was "shocked the requirement was so specific and concrete."

"This was a demand that President Zelenskiy personally commit, on a cable news channel, to a specific investigation of President Trump’s political rival," Holmes said.

The House Intelligence Committee’s next step would be to write a report for the Judiciary Committee outlining any impeachable offenses, perhaps by the time Congress returns from next week’s Thanksgiving break.

Judiciary would then hold its own hearings focused on the impeachment process before drafting and then voting out articles of impeachment against Trump for consideration by the full House.

"We’re moving at the pace that truth takes us," Pelosi said. "And when more evidence unfolds, if that requires more time, that’s when we’ll go."