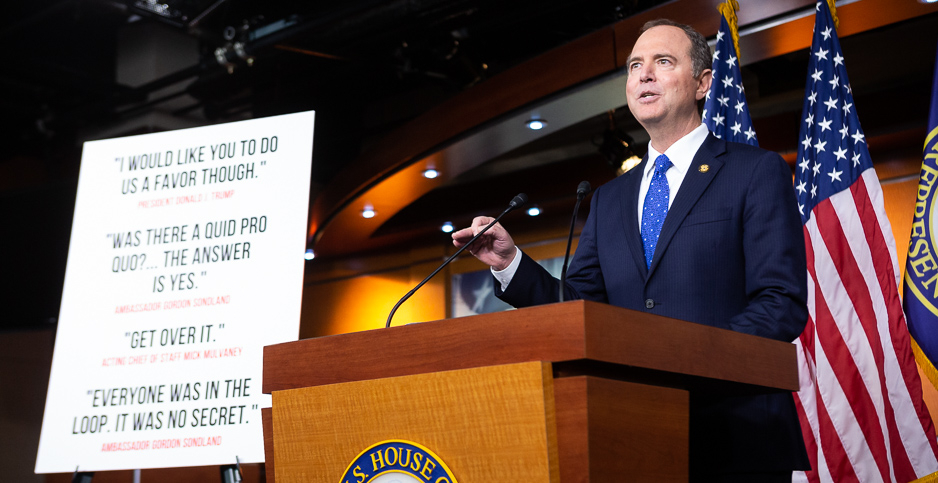 Rick Perry officially left the Trump administration three days ago, but he is mentioned more than 50 times in the House Democrats’ impeachment report, meaning they see him as vital to the probe of President Trump.

But the document offers the clearest narrative yet of how the former Energy secretary aided Trump’s push to deny vital aid to Ukraine until its new president announced an investigation into unfounded allegations of wrongdoing by former Vice President Joe Biden and his son Hunter. The younger Biden sat on the board of Burisma Holdings Ltd., a Ukrainian energy company.

The repeated references to Perry suggest Democrats do not see his recent departure as a reason to overlook his role as one of the "three amigos" the president charged with dealing with Ukraine.

The House Judiciary Committee will review the report in hearings, beginning today, that are expected to culminate with the panel considering articles of impeachment against Trump as early as next week. A vote by the full House could come before Christmas.

Trump said he would "love" to have Perry, and other Cabinet officials, testify before the Senate when "it’s fair."

"I don’t want them to testify when this is a total fix," he told reporters gathered in London for a gathering of NATO leaders.

Trump’s remarks came days after he tweeted he was "fighting for future Presidents and the Office of the President."

He went on to tweet he would be happy if other members of his Cabinet, including Secretary of State Mike Pompeo and acting chief of staff Mick Mulvaney, testify before the Senate, where a trial would likely take place at the start of the new year.

Senate Majority Leader Mitch McConnell declined to comment on Trump’s suggestion that Perry and others would testify before the Senate.

"If the House does in fact act, then the Senate will be in business with an impeachment trial," the Kentucky Republican said.

The report shows Perry involved from the start, including leading the U.S. delegation to the new Ukrainian president’s inauguration last spring, participating in a contentious White House meeting on Ukraine, and setting up a crucial phone call between Trump and Ukrainian President Volodymyr Zelenskiy in July.

Democrats also cited Perry’s refusal to comply with a congressional subpoena to testify and hand over documents in recent weeks as evidence of Trump obstructing Congress, a potentially impeachable offense.

House Intelligence Chairman Adam Schiff (D-Calif.) said yesterday in a press conference that Perry and other executive branch officials who refused to testify were doing so at the president’s behest.

Similarly, Perry’s former chief of staff, Brian McCormack, who now works on energy issues for the Office of Management and Budget, has failed to appear after being subpoenaed.

"The president instructed witnesses not to appear. The president used his office and the pulpit to try to intimidate witnesses," said Schiff, who added that letting the obstruction charges go unanswered would leave Trump and future presidents above the law for possible future misconduct.

Republicans in an earlier report cited Perry’s involvement in Ukraine as a contributing factor that they say clears the president of wrongdoing, noting that Perry had legitimate interests in energy issues in Ukraine while serving as Energy secretary.

The Democrats’ report charges that Perry and the department, which "has not produced a single document" sought by investigators, is "withholding" documents that witnesses have identified as relevant to the impeachment inquiry.

It notes that the committees sent a subpoena to Perry on Oct. 10 seeking 10 "categories of documents" in response to reports about his involvement. DOE responded, the report says, "by refusing to produce any documents and reciting many of the same flawed arguments as the White House Counsel."

The report notes the documents include a list of names that Perry passed to Zelenskiy during a May 2019 meeting, naming "people he trusts" that Zelenskiy could seek advice from on energy issues.

Investigators are also seeking a June 5 email to Perry and others about a trip Zelenskiy made to Brussels and a dinner that U.S. Ambassador to the European Union Gordon Sondland coordinated.

"The committees also have good-faith reason to believe that the Department of Energy is in possession of and continues to withhold significantly more documents and records responsive to the subpoena and of direct relevance to the impeachment inquiry," the report notes.