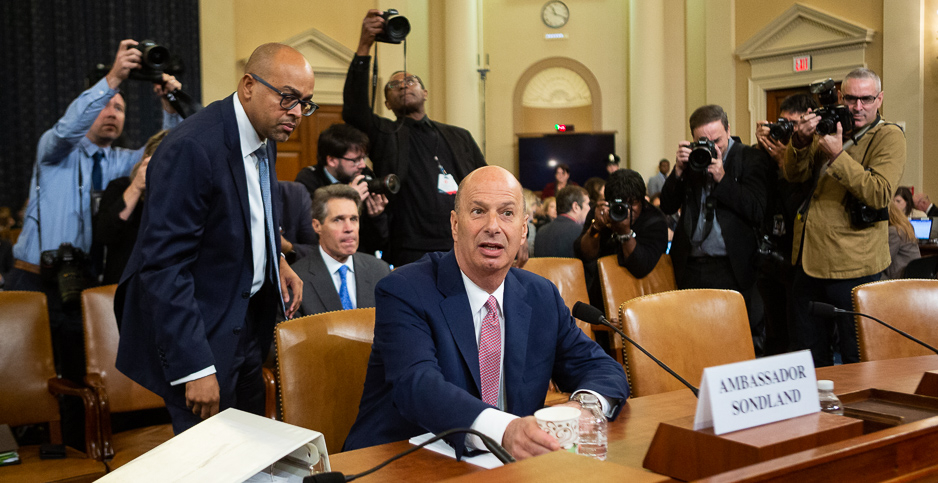 Energy Secretary Rick Perry is offering few specifics in denying fresh allegations he played a more central role in an effort to investigate ties between Ukrainian energy firm Burisma Holdings Ltd. and members of the Biden family. Those allegations are central to the House impeachment inquiry.

Claims aired during impeachment hearings yesterday suggest Perry may have been responsible for helping schedule a now-infamous White House call on July 25 between President Trump and new Ukraine President Volodymyr Zelenskiy and that he was aware of the president’s desire to go after the Bidens.

The call touched off the impeachment inquiry after Trump asked the Ukrainian leader for a "favor," referring to the investigations, and seemed to link it to the release of roughly $400 million in U.S. aid to the nation.

The charge came from U.S. Ambassador to the European Union Gordon Sondland, who along with Perry and former Ukraine envoy Kurt Volker, formed a trio dubbed the "three amigos." They unofficially coordinated Ukraine policy with Trump attorney Rudy Giuliani.

The email said Zelenskiy had agreed to a "full transparent investigation that will turn over every stone," and he would "greatly appreciate" a call from Trump in return.

Perry responded hours later, replying only to McCormack and Sondland, that Mulvaney had "confirmed" the call would be set up. Testimony shows that the call he was referring to is the one that eventually took place on July 25.

Sondland yesterday cited the exchange as one example of how U.S. officials pushed for promises of an investigation in exchange for what Ukrainian leaders ultimately hoped would be an invitation for the new president to visit the White House.

"Was there a quid pro quo … the answer is yes," said Sondland, who went on to say "everyone was in the loop" about the effort, including Perry.

Defense Department official Laura Cooper seemed to bolster those claims, saying in testimony later in the day that Ukraine may have known the United States was withholding aid as early as July 25.

It suggests Ukraine knew that aid was being withheld on the same day as Trump and Zelenskiy’s call, pushing the timeline of its knowledge earlier than the impeachment panel had previously known.

On that date, U.S. Embassy in Ukraine officials sent emails to the DOD and the State Department asking, "What’s going on with security assistance?" Cooper said.

An Energy Department spokesman responded with a statement yesterday saying Perry’s role had been "misrepresented."

"Perry spoke to Rudy Giuliani only once at the President’s request. No one else was on that call. At no point before, during or after that phone call did the words ‘Biden’ or ‘Burisma’ ever come up in the presence of Secretary Perry," the statement added.

Hunter Biden, son of the former vice president, served on Burisma’s board for five years until earlier this year. Republicans have repeatedly tried to link him to the company’s reputation for past public corruption.

House Intelligence Chairman Adam Schiff (D-Calif.) allowed Republicans to introduce the DOE statement into the hearing. He added, however, that Perry has "refused to come and testify under oath."

Schiff has said that refusal could bolster an obstruction of Congress impeachment charge against Trump.

Asked by Democrats’ counsel at the hearing about who else it would be useful for the impeachment investigators to hear from, Sondland cited McCormack because he knows the "ins and out." He did not elaborate. Like Perry, McCormack has declined to testify.

Sondland testified that although the "three amigos" were initially reluctant to engage with Giuliani, Perry "volunteered to make the initial calls, given their ‘prior relationship.’" Perry endorsed Giuliani for president in 2007 and campaigned with him in several states.

"Secretary Perry, Ambassador Volker, and I worked with Mr. Rudy Giuliani on Ukraine matters at the express direction of the president of the United States," Sondland said. "We did not want to work with Mr. Giuliani. Simply put, we were playing the hand we were dealt."

Giuliani asserted in a tweet yesterday that he "came into this at Volker’s request."

Democrats seized on Sondland’s testimony as their clearest evidence yet that Trump had committed potentially impeachable offenses by directing those efforts via Giuliani.

But Republicans highlighted comments Sondland made saying he did not initially know of a link between Burisma and the Bidens and was not told directly by Trump or Giuliani that aid was held up.

"So you really have no testimony today that ties President Trump to a scheme to withhold aid from Ukraine in exchange for these investigations," Rep. Mike Turner (R-Ohio) said in one heated exchange with Sondland.

The ambassador responded that even though he may not have received a direct order, it became obvious to him the aid was being held up to force the investigation.

Perry is likely to be a focus at today’s hearing, as well.

Among those scheduled to testify: David Holmes, the political director at the U.S. Embassy in Kyiv, who told investigators that Perry sidelined the State Department as he sought to assist Zelenskiy in a retooling of Ukraine’s state-owned energy company, Naftogaz.

He also testified that he saw Perry hand Zelenskiy a list of "trusted individuals" to consult. Perry has said that the list of American energy experts he offered to the Ukrainians was merely a suggestion to help improve governance of Naftogaz.

Reports, however, have found that one of the people on Perry’s list, Michael Bleyzer, received a potentially lucrative contract for oil and gas exploration from the Ukrainian government.

Perry’s efforts to reshape the leadership of Naftogaz have largely been on the sidelines of the impeachment inquiry, but Holmes’ appearance could subject the outgoing secretary to further questions.

Holmes described Perry and the other two "amigos" as taking a "very active and unconventional role in formulating our priorities for the new Zelenskiy administration" and personally reaching out to the new president and his senior team.

But Holmes said he never raised concerns with any of the three because of a belief they were involved with "political things that are relevant in U.S. domestic politics, and we stayed out of that."

Fiona Hill, Trump’s former top Russia expert, is also expected to testify. She has largely backed Perry’s assertion that his involvement centered around energy interests — and not an investigation into the president’s political rivals.