Rig wreckage probed for cause of deadly Okla. blast 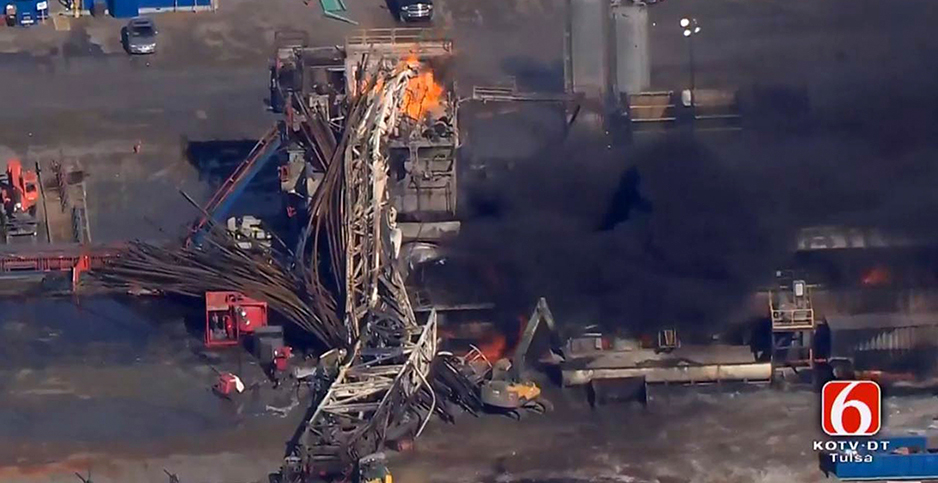 QUINTON, Okla. — The state medical examiner recovered the bodies of five workers who were killed when a natural gas rig exploded here Monday, leaving a small town to cope with one of the worst onshore drilling accidents in U.S. history.

The rig, belonging to drilling contractor Patterson-UTI Energy Inc., exploded at about 8:45 a.m. local time Monday and burned until late that afternoon. It wasn’t until noon yesterday that the scene was safe enough for investigators to pore through the wreckage.

The five men were found in the "doghouse" of the rig, the control room that sits atop the drilling platform next to the derrick, Pittsburg County Sheriff Chris Morris said. The other 17 crew members escaped, with only one minor injury, but the explosion was so severe the medical examiner has asked families for dental records to identify the men who perished, Morris said.

"From what I was told, they heard a loud boom — they saw the fire and they ran," Morris said at a news conference, relating what he’d been told by the crew. One worker, who was high up on the derrick, escaped by sliding down a guy wire.

The rig had been on the site for about 10 days and had drilled to about 13,000 feet when the explosion happened. Officials from Red Mountain Energy LLC, which owns the well site, and Patterson-UTI said they were providing counseling and other help to the families of the workers involved in the explosion. Three of the dead men worked for Patterson-UTI.

The deaths highlight a crucial fact of the drilling boom — much of it has occurred in rural areas where small-town police officers, sheriff’s deputies and volunteer firefighters are often the first responders.

Quinton has four police officers, Pittsburg County has 18 deputies, and the nearest full-time fire department is nearly 30 miles away in McAlester.

Firefighters from 11 agencies — 10 of them volunteer departments — came to help, along with deputies and emergency management workers from two counties and state troopers.

Local churches sheltered the victims’ families while the search was going on, and the local school district opened its gymnasium as a staging area for the emergency crews and brought in blankets, toiletries and other supplies for the rig crew.

It’s the kind of collective response that the state’s emergency workers have been honing since the Oklahoma City bombing in 1995, U.S. Rep. Markwayne Mullin (R-Okla.) said at a news conference.

"While we’re never totally prepared, it is very humbling to say that once again, Oklahoma showed its true colors in coming together to handle this tragic event," Mullin said.

At the same time, Oklahoma and other oil-producing states have been criticized for years for their lax enforcement of safety and environmental standards.

Critics say the Oklahoma Corporation Commission, which regulates the energy industry, was slow to react to swarms of earthquakes linked to oil-field wastewater disposal operations. The agency employs "compliance-based" enforcement that shuns fines against violators in favor of working with companies to get their operations back in line. It is governed by three elected officials who receive large portions of their campaign contributions from the oil and gas industry.

The U.S. Occupational Safety and Health Administration is investigating the cause of the explosion, along with the U.S. Chemical Safety Board. OSHA, though, has been criticized for not writing tougher regulations for oil and gas operations, which has an accident rate about seven times higher than the U.S. average (Energywire, Jan. 12, 2015).

An incident report written by an OCC inspector said there was a "confirmed violation" of agency rules. OCC said the operator, Red Mountain Energy, had no record of prior spills or other incidents.

OCC is investigating under its authority to prevent pollution and its rules on the operation of blow preventers. OCC holds operators like Red Mountain responsible, not contractors like Patterson-UTI.

"This is an open investigation," said commission spokesman Matt Skinner.

The U.S. Chemical Safety Board has sent two people to look at whether the agency should pursue a full investigation, said spokeswoman Hillary Cohen.

CSB, fashioned after the National Transportation Safety Board, is charged with investigating serious chemical incidents.

Patterson-UTI has a widely criticized safety record. Since 2008, when a U.S. Senate committee called the Houston company "one of the worst violators of workplace safety laws," at least 12 Patterson workers have been killed on the job (Energywire, Jan. 23).

Mullin, who sits on the House Energy and Commerce Committee, said there are already enough regulations on the books, although he’s open to holding hearings if the investigation turns up any gaps in oversight.

‘It’s what we do in small-town America’

Quinton, which is about 100 miles southeast of Tulsa and has a population of about 1,000, has seen its share of oil-field tragedy. In 2011, a truck hauling oil-field water struck a family that was riding in a horse-drawn wagon, according to local media reports. Last year, there was a fire at a producing well site about 3 miles from this week’s explosion site, the McAlester News-Capital reported.

Residents said they’ve learned to live with the risks, saying the economic benefits are worth it.

"Our guys need the jobs," said Lisa Williams, who owns a furniture store in Quinton and lives on the road to the drilling site. "Even with all this tragedy, I still support the drilling."

And like small towns everywhere, people in Quinton took pride in pulling together after the accident.

"It’s what we do in small-town America," said Stacey Henderson, the school superintendent. "When people need help, we answer the call."