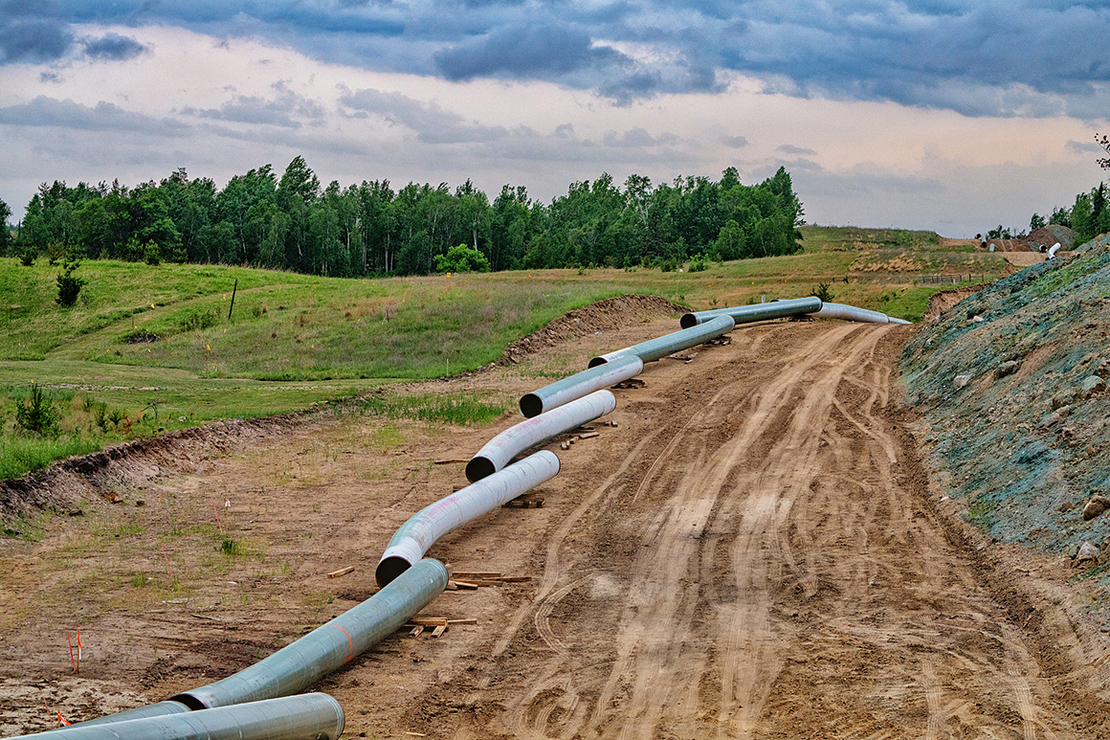 A novel claim defending the rights of wild rice against a Minnesota pipeline may pave a new path for tribal lawsuits over U.S. fossil fuel projects.

In a first-of-its-kind lawsuit from a tribal nation in the United States, the White Earth Band of Ojibwe is pursuing a "rights of nature" claim in tribal court to oppose a state approval of Enbridge Inc.’s Line 3 pipeline replacement.

Minnesota has now appealed the lawsuit in federal court, giving White Earth the chance to convince a federal judge that tribal law can be exercised to block projects — even those that are not located on a reservation.

"This law may be the tool of the future for Indian tribes," said Frank Bibeau, a tribal attorney for Honor the Earth, who is representing White Earth in the lawsuit against Minnesota. He is also a member of the Minnesota Chippewa Tribe, which incorporates six bands, including White Earth.

"We have an independent set of rights and ability to make laws," he said. "And we have a territory that we have a right to defend."

White Earth sued the Minnesota Department of Natural Resources in tribal court earlier this year after the state agency approved Enbridge’s use of up to 5 billion gallons of water to replace a 340-mile section of the Line 3 oil pipeline. The project is now completed.

The challenge asserts that the state’s permit contributed to reduced water levels, in violation of the rights of wild rice — or manoomin — that White Earth codified in 2018.

The rights of manoomin hold that the grain has the right to exist and flourish within its habitat, and the crop has a right to be restored after destruction. White Earth says that because of Enbridge’s "construction dewatering," the rice has been growing out of mud, making it inaccessible to be gathered from a canoe during the harvest season in August and September (Energywire, Aug. 6).

White Earth’s rights of nature challenge is a last resort after efforts to come to a political solution on Line 3 failed to gain traction, Bibeau said.

"Manoomin, wild rice, is our spiritual, most central part of our culture," Bibeau said.

Enbridge has maintained that no water was removed from wild rice lakes for the Line 3 replacement project.

"While this water appropriation was permitted, it was not ‘taken.’ Instead, the water was gradually released back to the ground near the appropriation site," Juli Kellner, a spokesperson for the company, said in an emailed statement. "This practice prevents depletion of the water table and follows strict environmental permits, regulations, and oversight."

White Earth also contends that the Line 3 project has posed other threats to water supply and wild rice. Minnesota recently fined Enbridge more than $3 million for piercing an artesian aquifer in the course of extending the pipeline.

The challenge is currently on hold after Minnesota officials argued that the band does not have the authority to challenge state officials in tribal court. The dispute now sits before the 8th U.S. Circuit Court of Appeals and the White Earth Tribal Appeals Court. The 8th Circuit is scheduled to hear arguments in the case on Dec. 16.

A federal court ruling siding with White Earth would chart a powerful new course for rights of nature challenges.

"What I’m doing isn’t regular. All my attorney friends, every time I brought it up, they’d look at me like, ‘What the hell are you talking about?’" Bibeau said.

"Well, you know, they aren’t Indians," he continued. "They don’t live on the rez. It’s not their rights. It means a whole different story to me and my cousins and friends and family."

Minnesota’s appeal of the White Earth lawsuit gives a federal court a chance to start to sink its teeth into the band’s rights of nature claim.

The 8th Circuit is currently wrestling with the question of whether White Earth can first demonstrate legal grounds, or standing, to bring its case. Then the band would need to convince a judge to apply tribal law to block the Line 3 replacement.

Just as a permit for a federal project could be rejected for violating a state water regulation, U.S. law requires that the federal government respect the laws and constitutions of tribal nations, said Oliver Houck, an emeritus environmental law professor at Tulane University.

"The thesis is, if [a project] is proceeding in violation of a tribal law, then it can’t proceed, either," Houck said. He later added: "It hasn’t ever been adjudicated by a court."

While countries like Ecuador, Colombia and New Zealand have recognized the rights of non-human parties to bring cases, lawsuits on behalf of sea turtles and other vulnerable species have been tossed out of U.S. courts for lack of standing.

Other countries have also passed rights of nature laws or constitutional amendments, but such an approach is unlikely to succeed in the United States, said Houck.

"The way to get it into American law is to do it through Indigenous law," he said.

A U.S. court ruling in favor of White Earth’s argument could have important implications across the country where other tribal nations have codified similar natural protections.

"Certainly a lot of academics like me are paying close attention," said N. Bruce Duthu, a professor of Native American studies at Dartmouth College and an enrolled member of the United Houma Nation of Louisiana.

"What are the interests of the rice?" Duthu said. "How do we articulate what that looks like from a legal standpoint? What are the demands we can now place or impose on parties?"

The Minnesota Department of Natural Resources did not respond to a request for comment for this story. In court documents, department officials have urged the 8th Circuit to toss out White Earth’s "unprecedented and improper attempt to exert jurisdiction it does not have" over the state’s permitting process.

Minnesota has maintained that sovereign immunity protects the state from being brought to tribal court against its will. State officials have warned of the broad implications of the tribe’s suit.

"The Band’s goal is to subject a State regulatory program to tribal court review, and to insert tribal legal codes into the State’s regulatory framework. This strongly weighs in favor of resolving the tribal court’s lack of jurisdiction now," state officials told the 8th Circuit in a brief earlier this month.

If the federal appeals court finds that White Earth doesn’t have jurisdiction to bring its case against state officials in tribal court, the band could seek to enforce tribal law in a new challenge in federal district court.

But if the case remains in tribal court, the decision wouldn’t set precedent beyond that bench, said Duthu.

A tribal court ruling can be "instructive," he said, "but it’s not binding."

For Bibeau of Honor the Earth, White Earth’s lawsuit is about more than protecting wild rice: It is also a fight about broader recognition of tribal sovereignty and self-governance.

Tribal nations notched a significant legal victory when the Supreme Court recognized last year in McGirt v. Oklahoma that nearly half of the Sooner State was still part of Indian Country because Congress had never explicitly overturned old reservation boundaries established in an 1833 treaty.

Bibeau compared the Line 3 dispute to McGirt. The pipeline traverses what used to be the historical bounds of the Leech Lake Reservation in Minnesota, before the federal government redrew the map.

"I’ve looked and listened and watched a long time about what they say we can and can’t do," Bibeau said, referring to the federal courts’ treatment of tribes. "And I’ve seen more and more where they realize that they’ve been overreaching in the past."

The strength of White Earth’s Line 3 lawsuit comes from its pairing of a rights of nature claim with long-established treaty rights to gather wild rice off reservation land, said Houck of Tulane.

"The treaty adds power to that argument, because now they’ve got a treaty to resort to as the source of their authority to regulate themselves," he said. "And that includes protecting nature."

"That is a stronger basis for this tribe to be able to pass a law like this ordinance," she said, "because they do have that treaty right."

Minnesota officials have argued that tribal courts do not have the power to assert jurisdiction in the Line 3 case. The state contends that White Earth should pursue its claims in federal court.

"What the Band cannot do is hale [the Department of Natural Resources] into tribal court and co-opt DNR’s powers for the purpose of imposing tribal laws and tribal court jurisdiction over off-reservation projects," state officials wrote in a recent brief filed in the 8th Circuit.

Instead, he said, the band is taking an offensive approach to its treaty rights. Typically, treaty rights are cited in defensive postures, such as when tribal members argue that they don’t need the same kind of hunting and fishing permits as other residents, Coleman said.

"If you’re going to apply the law in a way that it typically hasn’t been applied off reservation — and with a novel legal theory — it just seems a little bit challenging," Coleman said.

Other tribal nations that have taken steps toward enshrining rights of nature protections will be closely watching White Earth’s challenge.

"We are seeing increasing interest and engagement by tribal members and tribal nations on the rights of nature," said Mari Margil, executive director of the Center for Democratic and Environmental Rights.

The center helped White Earth draft its rights of manoomin law and is assisting the band with its lawsuit against Minnesota’s Line 3 approval.

The outcome of the Line 3 case could also have implications for other local governments eager to pass stronger environmental protections for their communities.

In Toledo, Ohio, for example, voters passed the "Lake Erie Bill of Rights" granting the water body legal status through a ballot initiative in 2019. A federal judge struck down the bill the following year.

"We anticipate a greater move toward law and policymaking," Margil said. With that move, she continued, come "enforcement and implementation to protect ecosystems, species and nature on the whole."

Bibeau, the attorney for White Earth, said he suspects that the rights of nature lawsuit has garnered wide interest because it cuts through complicated legalese and gets right to the issue of protecting resources that are critical to tribes’ cultural and spiritual practices.

"The whole world is enjoying this right now. It’s almost like a relief. We don’t have to talk about regular mumbo jumbo, that legal stuff," Bibeau said. He later said of White Earth’s case: "Something crazy is in play that could be defending the whole planet."