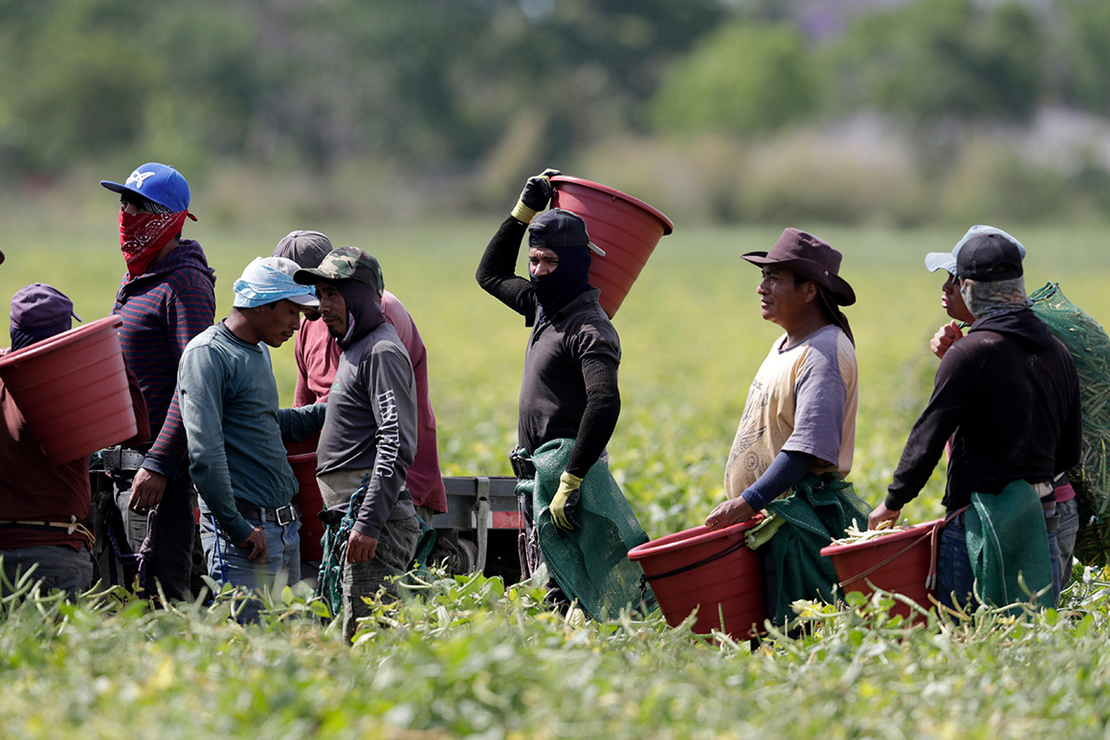 Farmworkers harvest beans in Homestead, Fla., where temperatures are estimated to rise dramatically over the next 30 years because of climate change. AP Photo/Lynne Sladky

The city of 80,000 will experience the nation’s sharpest increases in extreme heat, according to a groundbreaking new nationwide analysis that projects how climate change will affect neighborhood temperatures in 2053.

Homestead has another notable quality: 65 percent of its residents are Hispanic, and 22 percent are Black.

And that’s not a coincidence.

The data and analysis add new detail to research showing the disparate impact of climate change and particularly of extreme heat.

In Miami-Dade County, parts of Homestead are projected to experience an additional 45 days of extreme heat by 2053 compared to the number of extreme-heat days in 2023, according to a neighborhood-level analysis of the nation by the First Street Foundation.

That’s a bigger increase than any other U.S. neighborhood is projected to face.

Up Florida’s Atlantic coast on exclusive Fisher Island, where the population is 79 percent white, rising temperatures won’t be nearly as bad. The Miami-Dade County community will experience only 32 additional days of extreme heat by 2053, according to the First Street Foundation.

The disparities are based on broad geographic patterns, said Jeremy Porter, the First Street Foundation’s research director. Minorities are concentrated in southern states and big cities — places that will see more extreme heat.

“It has a lot to do with where minorities live,” Porter said. “They have a lot more exposure.”

The New York nonprofit released the first analysis of how extreme heat will affect each of 32,000 ZIP codes in the continental United States in 2023 and in 2053. The analysis assumes a moderate rate of climate change and projects the number of days per year of hazardous heat in 2023 and in 2053.

First Street developed the data from an unprecedented analysis of how extreme heat affects more than 100 million individual properties. First Street’s property-level information is publicly available and builds on its previous analyses showing the risk each property faces from flooding and wildfire.

The average ZIP code will experience 17 days in 2023 when the heat index exceeds 100 degrees Fahrenheit.

But ZIP codes where a majority of the residents are a racial or ethnic minority will experience an average of 27.5 days with such extreme heat, E&E News found.

ZIP codes where more than 90 percent of the residents are white will experience an average of 10.5 extreme-heat days.

The disparities will persist in 2053, according to E&E News’ analysis of First Street projections.

Minority-majority ZIP codes will experience an average of 43 days of extreme heat.

ZIP codes that are more than 90 percent white will experience 19.5 days of extreme heat.

The heat index combines temperature and humidity to measure how conditions feel to people. The National Weather Service considers a heat index of 103 degrees Fahrenheit dangerous and says it can cause heat stroke.

The added exposure to dangerous heat compounds the increased vulnerability that many minorities face due to factors such as a higher likelihood of having jobs that involve outdoor work or underlying health conditions such as asthma.

The National Climate Assessment published in 2018 says that projected increases in extreme heat will lead to more premature deaths and health complications such as heart and breathing problems and premature births.

The First Street Foundation’s nationwide analysis augments research that has focused on narrower areas such as large cities or a selection of counties — and raises new alarms (Climatewire, Dec. 10, 2020).

“There’s been a lot of local work on heat islands and city by city on disadvantaged neighborhoods,” Porter said. “There hasn’t been much work at a national scale at a high-resolution that allows us to understand what exposure to extreme heat is going to be in the near-term.”

First Street’s ZIP code-level analysis of extreme heat could help local planners understand their communities’ exposure and develop responses by providing information they may not have or know how to obtain.

Individual residents can benefit, too. First Street assigns each property a so-called heat factor, which rates its heat exposure on a 10-point scale, and provides information on how the heat level affects energy consumption and personal health.

“It gives people a more tangible expectation of what the changing climate means for their experience,” Porter said.

“Most of the country doesn’t have any access to any information that’s digestible and actionable,” Porter added. “This gives local communities the ability to understand their experience today and in the future and how they can allocate resources to respond to the extreme heat exposure.”

By 2053, 1,023 counties with a combined population of 108 million people will be exposed to at least one day when the heat index exceeds 125 degrees Fahrenheit.

In 2023, 50 counties with a combined population of 8 million people will be exposed to 125-degree heat, the First Street Foundation projects.