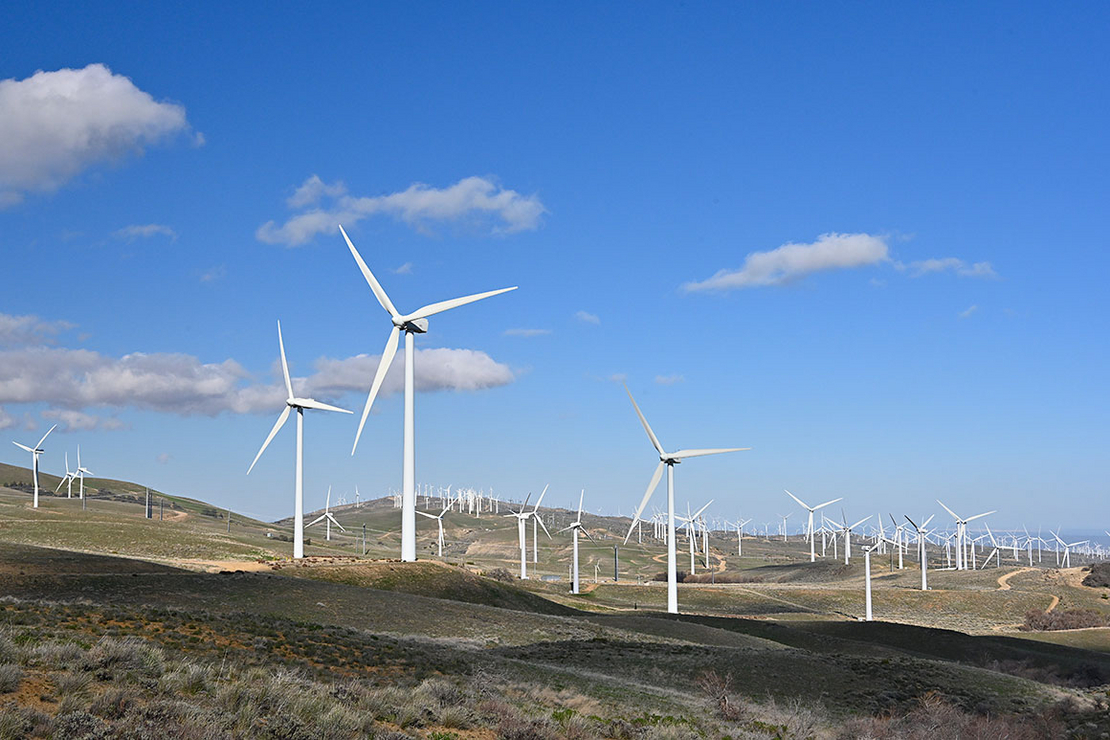 A wind farm near Tehachapi, Calif., is pictured. Matt Patterson via AP

The global rise in commodity prices is chipping away at the confidence of clean energy analysts, who say they are increasingly uncertain that renewables and batteries can sustain their long-running price declines.

The uncertainty was apparent this week in a pair of market analyses from BloombergNEF and the International Energy Agency, which assessed how the high price of key raw materials — ranging from steel, aluminum and copper to polysilicon and lithium and battery electrolytes — would change the economics of clean energy technologies.

Analysts at BNEF concluded, in a 2021 battery price survey published yesterday, that a wave of cheap electric cars might have to wait an extra two years, as lithium-ion batteries break their decadelong streak of annual drops in cost.

Separately, the IEA’s annual renewables report released this morning found that the current economic trends for raw materials, freight and energy raised "significant uncertainties" for renewables. If raw material costs stay high through 2022, it could wipe out three years’ worth of cost declines for solar investments, and five years’ worth for onshore wind, the IEA concluded.

All that could occur alongside elevated fossil fuel prices — a factor that would be especially meaningful in preserving renewables’ competitive edge, however. The IEA, for instance, revised upward its predictions for U.S. renewable growth over the next five years, saying wind and solar would be deployed 35 percent faster than projected due to favorable state and federal policies and corporate procurements.

Still, the pressures on wind and solar prices are arriving at a moment when analysts say a massive investment is needed to achieve climate action goals. Energy experts at the IEA estimated earlier this year that to reach net-zero carbon dioxide emissions by 2050, annual global investments in clean energy would need to triple.

If high raw-material prices stay high through next year, analysts wrote in the report, it would endanger about 100 gigawatts’ worth of renewables — an amount roughly equivalent to the United States’ entire solar sector — that have already been contracted. Smaller companies would be less equipped to shoulder those risks. And bringing online new wind and solar projects would require an extra $100 billion per year of investment.

"This is equivalent to increasing today’s annual global investment in renewable power capacity by about one-third," wrote the IEA’s analysts.

The IEA and BNEF reports add to a yearslong drumbeat of warnings about clean energy technologies’ exposure to volatile metals prices. But they also enlighten on the question of when and how the current supply crunch could really matter for efforts to fight climate change.

For example, BNEF’s findings on lithium-ion batteries, which are used in electric cars and grid-scale energy storage alike, were sunny up to a point. This year, the average cost of a lithium-ion battery pack fell 6 percent, to about $132 per kilowatt-hour. And that’s down from $684 in 2013 — a monumental plunge that has revolutionized the scope of possibilities for clean energy.

It remained shy, however, of the all-important $100 mark, the threshold that many energy analysts believe would allow carmakers to sell electric vehicles at the same price as a comparable gas car, while pulling in a similar profit.

In the second part of this year, found BNEF, battery packs actually rose in price, in tandem with the raw materials that go into battery cells.

In 2022, the average pack might go for $135, the firm’s analysts predicted. The $100 mark might not be eclipsed until 2026, two years later than BNEF had previously predicted — a shift that could drag out progress toward the Biden administration’s 2030 goal of converting half of all new car sales to electrics.

Kwasi Ampofo, who heads metals and mining research at BNEF, said that some important pressures on the price of lithium should be resolved by the first quarter of next year. "This will help to ease lithium prices," he said.

Still, in Europe, where regulators are forcing a faster shift to EVs, automakers might find themselves in a particularly tough position, said BNEF analysts.

"This creates a tough environment for automakers, particularly those in Europe," said James Frith, BNEF’s head of energy storage research and the lead author of the analysis.

European automakers, he added, "may now have to make a choice between reducing their margins or passing costs on, at the risk of putting consumers off purchasing an EV.”