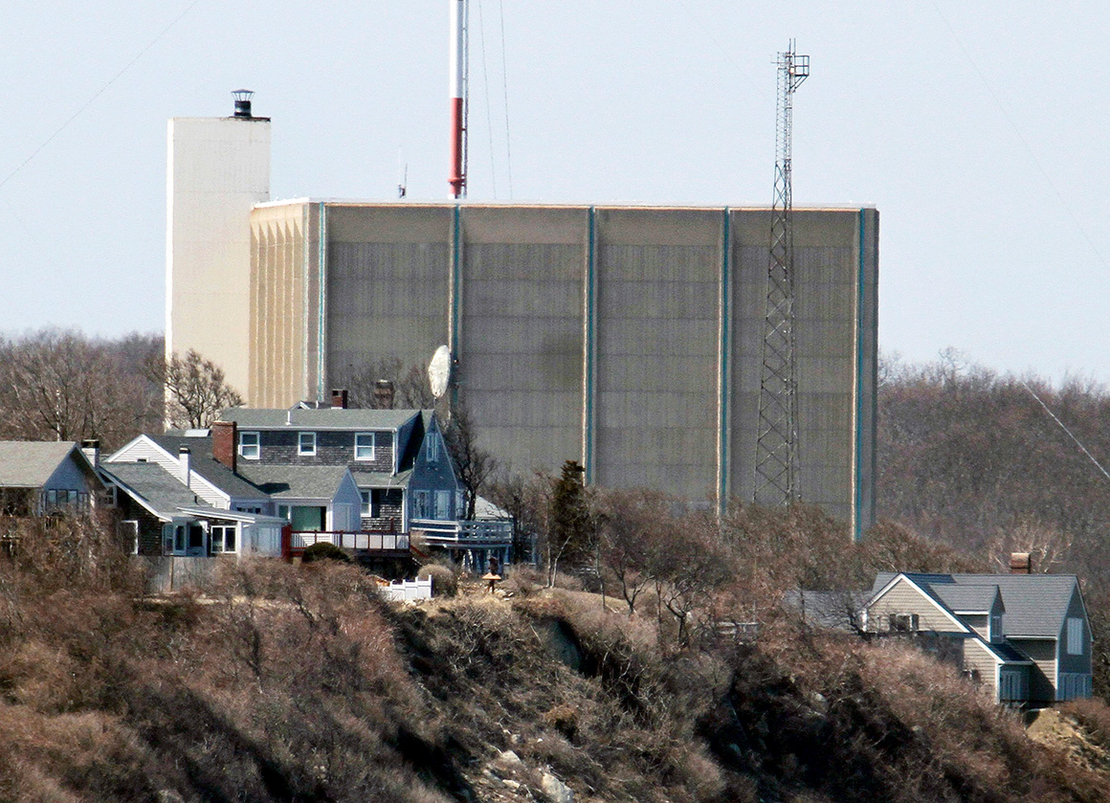 A portion of the Pilgrim Nuclear Power Station is visible beyond houses in Plymouth, Mass. The plant was retired in 2019, and carbon emissions have risen in New England as a result. AP Photo/Steven Senne

New England power plant emissions increased in each of the last two years, reversing four years of consecutive declines and highlighting the precarious state of decarbonization efforts in the region.

EPA data shows carbon dioxide emissions from power plants in New England rose by 3.5 percent in 2020 and another 3.5 percent in 2021, bringing total emissions last year to 24 million tons. That number is likely to climb further since EPA’s fourth-quarter numbers are preliminary.

The increase follows the closure of Pilgrim Nuclear Power Station in 2019 and reflects the slow pace of utility-scale wind and solar development in New England. A transmission line bringing more hydropower into the region from Quebec via Maine was halted by Maine voters.

“What we see is the biggest culprit or reason for that is the retirement of the Pilgrim plant,” said Matt Kakley, a spokesperson for ISO New England, the regional grid operator. “That led to largely an increase in natural gas usage, replacing a zero-carbon resource with a carbon resource.”

New England is united by a common electricity market and a shared commitment to decarbonization. Five of the six states have committed to cutting emissions at least 80 percent by 2050. New Hampshire is the lone state without legally binding emission reduction targets; Massachusetts and Rhode Island have pledged to achieve net-zero emissions by midcentury.

The increase in power plant emissions is potentially a major setback for those goals. The electricity sector is the only economic sector nationally to produce consistent emission reductions over the last decade, with emissions from other sectors of the economy flat or increasing slightly (Climatewire, Jan. 6). New England has mirrored those trends.

The region has retired most of its old coal, gas and oil power plants, largely replacing them with newer natural gas-fired facilities. That’s helped with long-term emission reductions. Power plant emissions in the region were down 26 percent between 2012 and 2021, according to EPA figures.

Jurgen Weiss, a senior lecturer who studies power markets at Harvard Business School, said New England is at a crossroads. Two years of increasing power plant emissions will be a minor concern if the region succeeds at building large quantities of renewables or constructing more transmission lines to import clean power from elsewhere.

But there are major doubts whether the region can muster the political will to build a cleaner grid.

Weiss likened New England’s renewable build-out to the myth of Sisyphus, the ancient Greek forever condemned by Zeus to roll a boulder uphill every day only for it to roll back down again.

From the grid operator’s perspective, that energy has the same impact as energy efficiency measures. Essentially, a portion of daily electricity demand estimated by ISO New England never materializes because customers are generating their own power. The grid operator estimates rooftop solar shaved nearly a third off its summertime demand peak in 2021.

But rooftop solar alone cannot shoulder the burden of the energy transition. A deep decarbonization road map analysis by Massachusetts regulators estimates retail electricity demand in the state could increase 105 percent in 2050, as a result of electrification efforts in transportation and buildings.

New England has installed almost 3,100 megawatts of wind and solar, or slightly more than the 3,000 MW of renewable capacity in neighboring New York, according to Energy Information Administration data. But New York plans to install almost 3,500 MW of onshore wind and solar by 2025, far eclipsing the nearly 700 MW planned in New England over that time.

That leaves New England dependent on the success of offshore wind to fuel its decarbonization efforts. Vineyard Wind, an 800-MW project contracted to sell power to Massachusetts, is slated to come online in 2024. It will be followed in 2025 by Revolution Wind, a 704-MW project serving Connecticut and Rhode Island. Four other projects serving the region are slated to come online in the second half of the decade.

“The scale at which the states are procuring that is going to have a material impact on the generation mix and presumably displace fossil resources,” he said. But while Dolan predicted the offshore wind facilities would be built, he noted the region has a lot riding on their success.

“We’re making really big bets on individual projects, and if there’s failure that sets us back,” Dolan said.

Meanwhile, New England continues to burn large amounts of fossil fuels. Natural gas is far and away the region’s dominant fuel source, making up more than 40 percent of the region’s electricity production, according to ISO New England. But in recent weeks, as temperatures plunged, the region has turned to oil to keep on the lights.

Most New England gas plants have oil-fired backup in case of cold weather. Gas pipeline capacity into the region is limited and dedicated to serving heating demand in cold weather. So while oil made up less than 1 percent of New England power generation in 2020 and 2021, it has made up a large share of electricity output this month.

There were 12 days through Saturday when oil accounted for more than 10 percent of the region’s daily electricity production, according to EIA figures. For context, the fuel did not eclipse that threshold once in 2019, 2020 or 2021.

The grid has operated in normal conditions, and no challenges to reliability are anticipated, according to Kakley, the ISO New England spokesperson. But analysts said it highlighted the need to move aggressively to transform the region’s electricity supplies.

Emission reductions will be harder to achieve going forward because there are fewer old, inefficient power plants to retire. Only two seldom used coal plants in New England remain, and one of those laid off its workers in 2020. Mystic Generating Station, a large gas and oil plant outside Boston, is set to shut down in 2024.

“Up to now, it has been relatively easy to speak out of both sides of your mouth,” said Weiss, the Harvard lecturer. “If you want to decarbonize New England in the time frame that is in the law, then you have to do things that aren’t so easy, like building lots more transmission lines, for example. You have to think about how quickly you can build out renewable energy sources. That means you have to probably site facilities in places where people don’t like to see them.”

He added, “At this point, in deciding what is smart, speed becomes a relevant factor. Because 28 years is a relatively short time to change an energy system.”