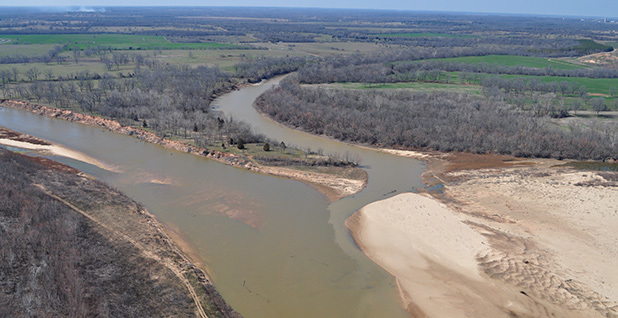 A Texas bid to divert water from where the Kiamichi River flows into the larger Red River in Oklahoma was stymied by the Supreme Court two years ago. It was one example of interstate water disputes that are becoming increasingly common at the high court. Photo by Jeremy P. Jacobs.

Major decisions about how U.S. water is allocated among states are increasingly being made by nine lawyers who — according to one of them — "couldn’t know less about it."

That was Supreme Court Justice Stephen Breyer’s take last year during oral arguments in litigation between Kansas and Nebraska over water from the Republican River.

The case was emblematic of what some see an alarming trend: the funneling of interstate water fights to the Supreme Court.

Lawsuits between states by rule head to the high court, which has "original jurisdiction" over such fights. And with a changing climate, growing populations and drought conditions ravaging the West, what was a trickle of water cases has become a steady stream.

There are four ongoing water fights at the Supreme Court — between Texas and Mexico, Florida and Georgia, Montana and Wyoming, and Mississippi and Tennessee. The court has also ruled on two others involving Texas and Oklahoma, as well as the Nebraska-Kansas dispute, in the past two years. In each case, one state is either claiming its upstream neighbor is drawing down a shared river or outright stealing water from beyond its borders.

These cases typically take years to resolve once they reach the high court, raising concerns about whether it’s best to leave crucial water-allocation decisions to the justices. But in large swaths of the country suffering shortages, water frequently becomes a hot-button political issue that makes compromise between states impossible. Litigation is the only option.

"It’s a matter of time before parties get disgruntled," said Jen Pelz, the director of WildEarth Guardians’ rivers program. "It’s going to become a battle between the states."

There are typically two types of interstate water disputes at the Supreme Court. The first involves a state claiming another is unfairly depleting river flows that should cross the border.

Consider Florida v. Georgia. Florida is claiming its northern neighbor is pulling too much water out of the Apalachicola River Basin to serve the booming Atlanta metropolitan area, depriving the Sunshine State of water that typically flows to the estuary that was once home to a robust oyster industry (Greenwire, Nov. 3, 2014).

The second — and more common — type of lawsuit is challenges to interstate water compacts. There are more than 20 such agreements across the country, divvying up water from 20 watersheds — from the Colorado River to the Delaware River.

Water compacts have become fraught because many were negotiated by the states and ratified by Congress decades ago. In the current Texas v. New Mexico and Colorado case, for instance, Texas claims New Mexico is diverting too much water for irrigation out of the Rio Grande before it crosses the state line in violation of the 1939 compact (Greenwire, March 12, 2014).

There is a long history of interstate water clashes at the Supreme Court.

In 1935, Arizona Gov. B.B. Moeur (D) deployed the National Guard to block construction of the Parker Dam on the Colorado River just below the Hoover Dam because the project would benefit Colorado and California.

As chronicled by author Marc Reisner in his 1986 history of water management in the West, "Cadillac Desert," Maj. F.I. Pomeroy of the Arizona National Guard stayed at the proposed dam site for seven months. The project became an embarrassment for Interior Secretary Harold Ickes, who put it on hold while the state’s legal challenge played out.

Arizona, which had previously lost multiple attempts to block the Hoover Dam at the Supreme Court, prevailed. The high court sided with the state on the grounds that the project was not authorized by Congress. (After some concessions, however, the dam was built.)

About 20 years later, in 1952, Arizona again went to the Supreme Court to challenge California’s bid to install new pumps to expand its share of Colorado River water over the amount allocated by its compact.

Arizona v. California became one of the longest-running cases in Supreme Court history, with rulings continuing through 2006.

Arizona won again. The justices held that California couldn’t pull more water than it was allotted under the compact.

The latter Arizona case illustrates some of the concerns about water disputes ending up at the Supreme Court.

For one, they are seemingly interminable. Unlike most Supreme Court cases, where the high court issues a ruling within a calendar year of when it agreed to review the case, a different process applies to original jurisdiction lawsuits.

The court assigns a "special master" — typically a federal judge or well-regarded attorney — to conduct what amounts to a virtual trial.

Then the special master submits recommendations to the justices. But the states involved can object to those findings, filing "exceptions." The justices can then hold oral arguments before accepting the special master’s report or agreeing to one side’s exception to it.

The whole process can lead to decades of hard-fought legal wrangling. The current Montana-Wyoming case was filed more than eight years ago and has yet to be resolved.

And, as Reisner wrote in "Cadillac Desert," the Arizona-California lawsuit became so contentious that the special master in that case, New York attorney Simon Rifkind, had a heart attack in the middle of the proceedings despite only being in his 50s.

Attorneys who specialize in interstate water cases are confident — and worried — that this sort of litigation will become routine at the high court.

"They have been coming with more frequency, and it’s likely to increase in the future," said John Draper, who has been representing states in water disputes for 25 years.

Is the system working?

Many interstate water agreements are outdated.

The 1922 Colorado River Compact, for example, allocates 16.4 million acre-feet per year to seven states. In the last 15 years, about 12 million to 14 million acre-feet has been actually coming down the river. (An acre-foot is about 326,000 gallons — enough to cover an acre with water a foot deep, roughly a year’s supply for a family household.)

Jennifer Cornejo, a Houston-based attorney with the firm Vinson & Elkins who follows interstate water cases, said Supreme Court cases can drag on while states need an answer for their water needs.

"It’s completely drawn-out," she said. "They are trying to get these issues addressed, but it takes so long and the problem is now."

Others voiced concerns about whether it’s wise to leave such complicated water accounting to the justices.

L. William Staudenmaier, a Phoenix-based attorney with the firm Snell & Wilmer, was involved in the Texas-Oklahoma dispute. He left oral arguments wondering how much the justices were comfortable with pertinent details.

"My sense was that the justices were really struggling to understand the water issues in context," he said. "I honestly think they are a little reluctant."

Draper disagreed, arguing that states are often in intractable positions and an arbiter like the Supreme Court is necessary.

"The system is functioning appropriately," he said. "Where you get changed circumstances and you have to figure out how an earlier compact should be applied to new developments, that’s where the court is needed. I’m pleased the court is not shy about taking on that responsibility. That really is its responsibility."

He added that the Kansas-Nebraska dispute over whether Nebraska was taking too much water out of the Republican River for groundwater pumping showed that the justices can take a nuanced and shrewd approach to the cases.

The justices, he said, sought to enforce the 1943 compact as a contract — trying to determine its intent and how it applied to Nebraska’s groundwater irrigation scheme.

"That shows a quite robust approach to these interstate cases from the court," he said.

Lengthy — and expensive — legal battles could incentivize states to work out their water issues on their own and avoid litigation.

Colorado River states, for example, drafted guidelines in 2007 for reduced allocations should a drastic shortage occur.

At the time, no one thought such a shortage would take place for decades, said Gary Wockner of the nonprofit Save the Colorado. It almost would have this year, though, if it hadn’t been for "miracle rains" in May.

If those guidelines need to be implemented, Wockner said, states may suddenly feel more litigious.

"Everyone sees an impending crisis," he said. "But we haven’t hit the legal point of no return yet."

Further, Draper noted that there was one troubling sign for state negotiations in the Kansas-Nebraska decision. The high court agreed with the special master and changed a water accounting procedure from what was originally agreed to by the states in the compact.

That holding, Draper said, could have a "chilling effect" on states’ willingness to renegotiate the terms of water compacts out of fear that the new terms could be eventually overruled or reversed by the Supreme Court.

Still, renegotiation seems to be what at least one Supreme Court justice would prefer.

Justice Breyer, again during the Kansas-Nebraska arguments, asked, "Is there any chance you all could work this out?"