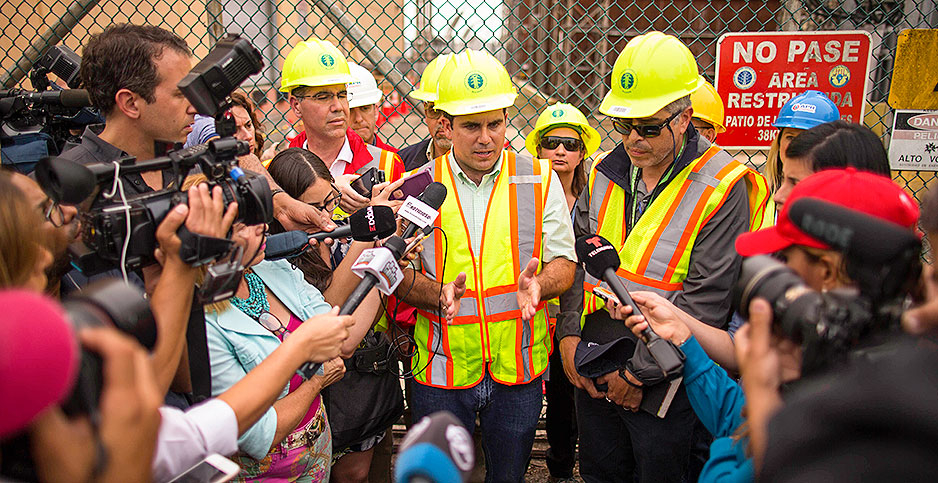 More than a month after Hurricane Maria knocked out Puerto Rico’s power, it’s unclear who among a half-dozen government bodies has the final word on how and when the territory’s electric grid will be rebuilt.

Most of the island is still without electricity, a deficit that is cratering the economy and raising the prospect of a mass exodus. But the grid that Maria destroyed was brittle and vulnerable, and some argue that the multibillion-dollar restoration should be fundamentally reimagined.

Exerting influence over this process, as life on the island hangs in the balance, has turned into a complex battle over who’s calling the shots inside and outside Puerto Rico’s embattled public utility. Energy regulators and utility officials are clashing, as the federal financial oversight board comes into direct conflict with advocates of island sovereignty.

"You try to track who is in charge — [the Federal Emergency Management Agency], the Corps of Engineers, the government of Puerto Rico, [the Puerto Rico Electric Power Authority] — it’s difficult to find who the leader is right now," said Josen Rossi, a former president of the Puerto Rico Manufacturers Association.

Yesterday saw a new development in a saga that has evolved by the day. Puerto Rico’s governor, Ricardo Rosselló, and the island’s utility, the Puerto Rico Electric Power Authority (PREPA), removed Whitefish Energy Holdings LLC as a lead contractor in the grid’s rebuild (see related story). The tiny Montana company had become the focus of fierce criticism over the strange and secretive way the recovery has been managed so far.

That decision might ease a headache for Rosselló, faced with investigations by Congress about how Whitefish landed a $300 million contract, the largest in the recovery effort. But it also underscored how many disconnected decisions are being made around the reconstruction and raised fresh questions about how long it will take to get the lights back on.

Some of this confusion lands at the doorstep of a federal government eager to look like it’s getting something done for 3.4 million citizens.

Several U.S. government agencies have a footprint in Puerto Rico, including FEMA, which is in charge of the overall Puerto Rico restoration effort; the U.S. Army Corps of Engineers, which was assigned by the Trump administration to oversee grid rebuilding; the Department of Energy, which has oversight of the executive branch’s energy policy; and Congress, which controls federal purse strings and is now conducting multiple investigations into the island’s energy recovery.

And then there’s the federal board charged with overseeing Puerto Rico’s economy and managing the restructuring of the territory’s $70 billion debt. Puerto Rico filed the largest municipal bankruptcy in U.S. history in the spring. Known by the law that created it — the Puerto Rico Oversight, Management and Economic Stability Act — PROMESA on Friday assigned a manager, Noel Zamot, to oversee the island’s effort to restore electricity.

Meanwhile, forces on the island have their own claims to lead the grid rebuilding. First among them is PREPA, which built the territory’s grid and for decades has had little to no oversight. The head of PREPA is appointed by Puerto Rico’s governor.

Over the last several days, both Rosselló and PREPA’s board challenged PROMESA’s authority over PREPA. The New York-based federal judge who oversees Puerto Rico’s recovery, Laura Taylor Swain, is considering the issue of Zamot’s role and will hear oral arguments on the issue on Nov. 13.

PREPA owes bondholders and other creditors $9 billion. Powerful bondholders have pressed for more control, arguing first and foremost that PREPA is badly mismanaged. But Swain recently ruled against the bondholders’ request for a receiver to be put in charge of the utility.

Following Maria’s strike, the bondholder groups offered PREPA $1 billion in new financing to cover the commonwealth’s one-quarter matching share of FEMA support for upgrading the grid. The new funding would replace some of the current debt. PREPA rejected that offer.

Finally, the Puerto Rico Energy Commission, created three years ago to oversee PREPA, has a rebuilding plan that could serve as a blueprint for a better grid. That plan, a draft of PREPA’s first-ever integrated resource plan, addresses several problems with the island’s grid, including the fact that emissions from its decades-old, oil-burning power plants have fallen out of compliance with U.S. EPA rules.

On Friday, in Washington, the "who’s in charge?" question around Puerto Rico reconstruction dominated a discussion on Capitol Hill.

When one participant complained that the Army Corps grid repairs were limited to replacing the knocked-down poles and wires of the existing grid, a FEMA representative stood up to challenge that conclusion.

Shannon McLachlan, who heads community planning coordination for the FEMA region that includes Puerto Rico, said, "It’s not true that the Stafford Act [the federal law governing FEMA’s emergency disaster assistance] only allows us to rebuild up to pre-storm conditions. The people who are telling you that — including people in the field — misunderstand the law."

The Army Corps is overseeing reconstruction in roughly half of the island. It’s restricted under FEMA’s emergency response authority to rebuilding the existing system. But another part of FEMA’s authority — Section 406 of the Stafford Act — authorizes FEMA disaster assistance to strengthen grid facilities, she said.

McLachlan said her division of FEMA is trying to convene meetings to establish a "recovery support function."

"Right now we do not have that person named who will be leading the infrastructure recovery support functions for Puerto Rico," she said. "The meetings that have occurred are happening in Washington, D.C., and they should be happening in Puerto Rico. More pressure needs to get out there to make that happen. By not having us there, it’s true there is a disconnect."

Tomás Torres, executive director of the Institute of Competitiveness and Economic Sustainability, based in Puerto Rico, said that before Maria, PREPA and the commission estimated it would take $4 billion to modernize the island’s power grid. "Now, with all the distribution that is on the floor, that will be double or triple," he said.

Transforming the grid "must include Congress," Torres said. "Whether they like it or not, they are in charge. Normally they don’t like it. Now we have to make the best of it."