Rivian is coming. Here’s why it matters 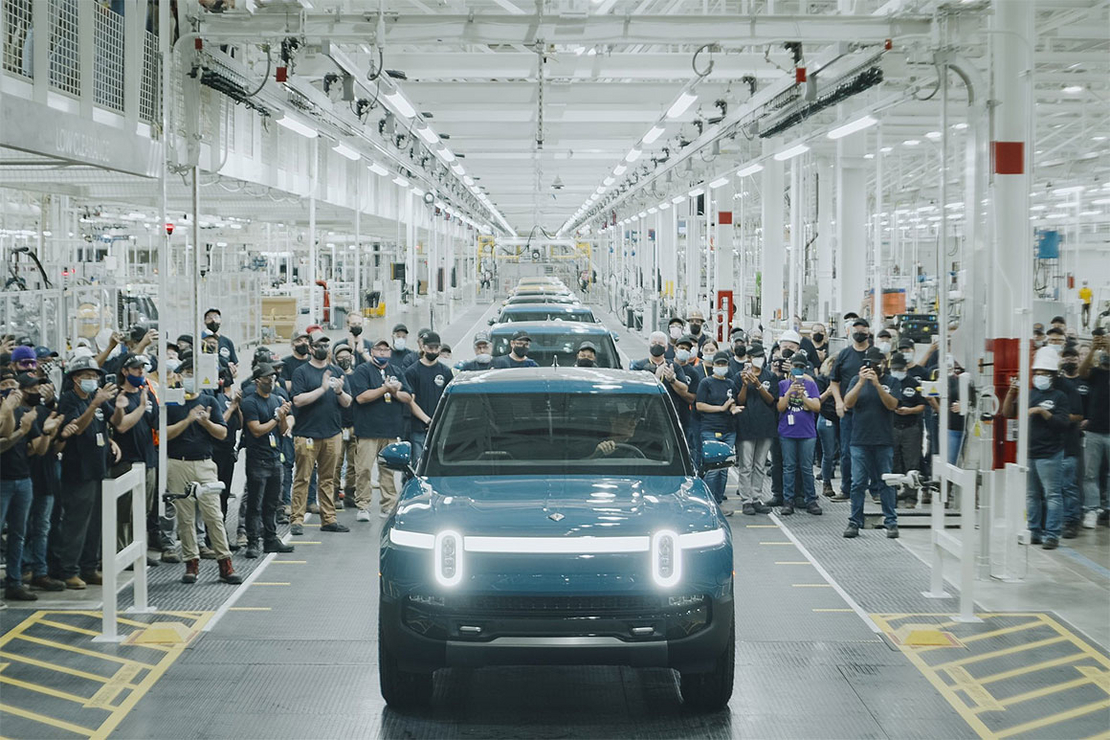 Rivian's first vehicle intended for a regular customer rolled out of the electric automaker's factory in Normal, Ill., this week. @RJScaringe/Twitter

Americans always have had exactly one choice when it comes to all-electric carmakers: Tesla. Starting this month, they will have another.

Rivian Automotive Inc. rolled its first pickup truck destined for regular customers off its assembly line in Normal, Ill., last week, and first deliveries are coming soon. The vehicle is a milestone toward electric vehicles’ being, well, normal. But it’s not the only reason that Rivian matters.

One reason is historic. If Rivian thrives, it will be only the third American automaker in a century to not to die by bankruptcy. The others are Chrysler, founded in 1925, and Tesla, in 2003.

While a crowd of electric automakers are engaged in the Sisyphean task of delivering a mass-market vehicle — Lucid Motors, Fisker Inc., Canoo, Bollinger Motors and Lordstown Motors, to name several — Rivian is, after a dozen years of effort, on the cusp of actually doing it.

The other reason Rivian matters is the sort of vehicle it’s made.

“They’re going to be the first to market with an electric pickup truck,” said Chris Harto, a policy analyst at Consumer Reports. “That’s a big deal.”

Pickup trucks are by far the most popular vehicles in the country. Rivian’s R1T pickup, which starts at $67,500, will soon be chased by two electric competitors: the F-150 Lightning from Ford and the Cybertruck from Tesla. But for a few months or more, Rivian will have the field to itself.

The pickup looms large, not just in the public imagination, but in the fight against climate change. Today’s pickups are prodigious drinkers of diesel and gasoline.

“The gains in reducing emissions … is so much larger than if shifting a Prius driver to a Chevy Bolt,” Harto said, referring to General Motors’ electric compact.

Rivian is often compared to Tesla but has taken a very different approach. Its founder, RJ Scaringe, is not an iconoclast like Tesla CEO Elon Musk and has built deep bonds with corporate America, drawing big investors like Ford and a landmark order for 100,000 delivery vans from Amazon.com.

An exciting vehicle, a head start, and gobs of money are great assets for a new car company — but are they enough?

Richard Reina, the product training director at auto website CARiD, points out that vehicles are the most expensive thing people buy aside from a home, and that pickup drivers are intensely loyal to the last truck they bought.

“Rivian is completely unknown,” Reina said. “Picture the average American customer, and they will ask, ‘Am I going to go with a brand I’ve never heard of?'”

Rivian splashed into the public eye in 2018 at the Los Angeles Auto Show when it debuted prototypes of the R1T, a pickup truck, and the R1S, an SUV.

What caught people’s attention wasn’t just that they were electric — no one had revealed an electric truck at the time — but that they opened the door wide to outdoor enthusiasts as an “electric adventure vehicle.”

On stage, Scaringe, the founder, revealed that the pickup truck has a “gear tunnel” that traverses its width. An electric vehicle requires far less machinery underneath to make it move, and Rivian used the additional space to create secure storage for gear like snowboards.

“They’re kind of acknowledging that ‘We’re not marketing to you people who go to Home Depot and throw in a lot of cinder blocks. We are targeting the people who will go into the Michigan Upper Peninsula and rough it for a week.'” Reina said.

Scaringe also promised that the vehicle would travel 400 miles on a battery charge, go from zero to 60 mph in three seconds, tow 11,000 pounds, and navigate in more than 3 feet of water. The launch edition of the vehicle fulfills all those promises but the range: It goes 300 or more miles, with a 400-mile version expected next year.

Few in the audience knew that Scaringe, whose raven hair and horn-rimmed glasses have drawn comparisons with Clark Kent, had been toiling on the idea for almost a decade.

A Ph.D. graduate of the Massachusetts Institute of Technology in mechanical engineering who says he always wanted to create his own automotive brand, he kept his head down until his products were ready.

“To some degree, he’s the un-Elon Musk. He’s a methodical and very approachable guy,” said Alan Baum, an independent automotive business analyst in Detroit. He noted that prior to fame, Scaringe had been a fixture in the lobbies of auto shows for years.

Before most people had even heard of Rivian, Scaringe had arranged in 2017 to buy a 2.6-million-square-foot plant in Normal, Ill., just outside of Bloomington, at a fire-sale price. The cavernous facility had been abandoned by Mitsubishi Motors.

Scaringe had a knack for gathering deep-pocketed allies.

“He has done an excellent job of raising money, kind of on the sly, from a number of very patient investors,” Baum said, “until he then crossed the line.”

That line was crossed in 2019, when Rivian won a series of huge investments that bolted it onto America’s corporate machinery. Ford put in $500 million; Amazon.com, $700 million. Another $350 million came from Cox Automotive, which offers Rivian its presence in automotive service and maintenance.

Then, in early 2020, came the news any automaker would envy: Amazon put in an order for 100,000 delivery vans, to be shipped in stages through 2030. A handful of the boxy, blue-gray vehicles are now being tested on routes in Los Angeles, and Amazon plans to deploy them in 16 cities by the end of this year.

In July, both Ford and Amazon anted up again, leading a second, $2.5 billion investment round.

Rivian’s linking of arms with corporate giants stands in stark contrast to Tesla, which has always positioned itself as an insurgent meant to upend traditional automakers.

“Rivian has from the get-go had a respect for the traditional industry,” said Brinley. “That did help them quite a bit compared to a company, like Tesla … that wanted to reinvent everything.”

Two weeks ago, Motor Trend published the first auto-magazine review of the R1T. The publication was not disappointed, calling it “the most remarkable pickup we’ve ever driven.”

Rivian’s two tracks — as a desirable customer brand and as a buttoned-down corporate fleet vehicle — have analysts believing it has several pathways to success.

“It is one of the best-positioned new EV startups ever,” said Karl Brauer, an auto analyst at iSeeCars.com. “I don’t think it will take 15 years for them to be profitable, like another EV startup.”

Which is not to say that the Rivian will have it easy. Experts said the biggest challenger on the horizon isn’t Tesla, but Rivian’s own partner, Ford, and its electric F-150 Lightning, due next spring. Citing strong customer interest, Ford said last week it would up its budget for Lightning production by $250 million and double its annual production target to 80,000 units.

The F-150 has been the bestselling vehicle in the United States for decades, and the fact that it is going electric means that era of standing out as an electric automotive startup is about to end.

“The ‘Watch us outpace the traditional automaker in speed and innovation’ part of your plan is harder to execute after the F-150 Lightning,” Brauer said. “Tesla and Rivian may look at that thing and say, ‘Oh, crap.'”

Rivian, for all its newness, has developed a footprint that will be difficult to maintain if sales don’t take off.

The company is developing showrooms and service centers across the country and is building out a national network of charging stations in far-flung nature areas where its drivers are likely to find themselves. It is currently trying to fill 1,500 jobs. It also has a sophisticated lobbying operation (Energywire, July 22, 2020). Even before its huge first factory had rolled out its first car, reports emerged that Rivian is scouting for a second factory.

Unlike with Tesla, which has had cycled through many successes and stumbles since 2008, Rivian has little time for error.

“They don’t have the same runway that Tesla did, to experiment, figure things out, without the competition,” Harto said.

In the end, the biggest legacy of Rivian may not be whether it survives, but what its unveiling in 2018 did to galvanize the race to convert the nation’s fleet of exhaust-spewing pickup trucks to electric.

“The threat of Rivian helps push legacy automakers,” said Harto. “Would the Ford F-150 Lighting exist if Rivian were not on the horizon?”