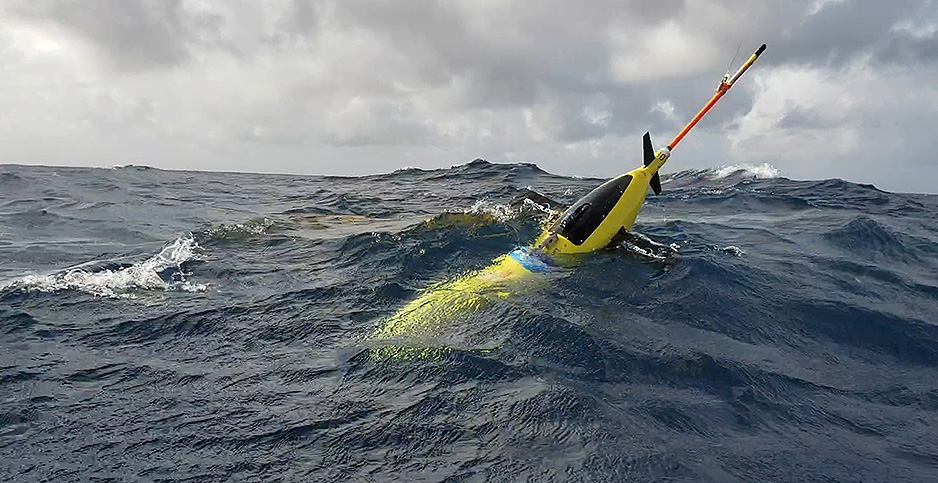 A robotic "glider" surfaces near the coast of Puerto Rico in 2018. Federal scientists are deploying a fleet of 30 gliders to study how the ocean affects hurricanes. NOAA

This year, as hurricanes race into the warming coastal waters of the U.S., an array of seagoing robots will be waiting for them.

The torpedo-shaped machines will be positioned in what amounts to no man’s land, places where no ships or humans might survive and where space satellites can’t gauge the potency of storm action.

But for the stubby-winged and narwhal-horned "Slocum ocean glider," this is the world it was made for.

The mini-armada is one way scientists are trying to better understand how the howling storms are changing as warming oceans amplify their intensity and extend their inland reach.

The robots’ work appears as blips of new data on computer screens, put there by a growing navy of autonomous vehicles waiting for hurricanes in the choppy water, or cruising just beneath it.

"We have gliders that have gone through two or three hurricanes already," explained Gustavo Goni, a lead scientist at the Atlantic Oceanographic and Meteorological Laboratory in Miami, which is run by NOAA.

"They are robust. They don’t even care. Some of them have even been in fights with sharks. We know this because we find sharks’ teeth in gliders when we recover them," he explained in an interview.

It has taken over six years for NOAA to build up this array of floating, sensor-packed equipment. First it had to figure out the logistics of buying and experimenting with them. Then it had to train technicians how to equip and use them.

In 2014, the agency had two gliders ready to launch in preparation for hurricane season. As this year’s season gets underway, it will have as many as 30 waiting for missions to track and measure big storms approaching coastal areas.

And when they arrive, the robots will be mixing around in the warm ocean water that fuels these monster storms. They draw their menacing strength from surface waters, down to the depth of 74 feet, that are warmer than 79 degrees Fahrenheit. The amount of extra warmth they absorb depends on a number of variables, Goni explained.

Sometimes there is a thin layer of super-warm fresh water from rivers floating on top of coastal seawater. Sometimes the power and direction of incoming hurricanes can mix that fresh water with cooler and denser lower layers of salt water.

When the top layer cools, the power of storms can ebb. But when it doesn’t cool, that is critical knowledge.

"You want to have the right forecast. If the public is told a Category 5 storm is coming and then they get a Category 3, then they don’t believe you the next time you make a forecast," Goni said.

If emergency managers in coastal cities get more prompt information about a storm’s intensity and direction, they can order evacuations and move ships out of threatened areas, saving lives and limiting damages.

But more data points are needed. Goni refers to them as "observations" from various places around and under the storm.

The Slocum ocean glider was invented by Douglas Webb, a Massachusetts oceanographer. He imagined heroic possibilities for the vehicle and named it after Joshua Slocum, the first person to sail around the world alone, in the 1890s.

Webb left the Woods Hole Oceanographic Institution and formed his own company to sell his invention. Gliders have multiple applications because they can work in both shallow and deep water and can carry as many as 45 variations of different sensors. When the glider surfaces, it radios the data to satellites.

Webb’s company was bought in 2008 by Teledyne Technologies Inc., which has attracted a number of customers, including the U.S. Navy, NOAA and a variety of universities. One of them is Rutgers University, which has oceanographers that have made two attempts to send a glider across the Atlantic.

The Slocum requires a tiny amount of energy for propulsion. It moves itself by creating changes in its buoyancy by either absorbing or expelling liquids, sometimes using external bladders. When liquids are pushed out of the glider’s body, it becomes lighter and begins to rise.

Water moving over its tiny wings directs the glider’s movement, giving it what is described as a peculiar "sawtooth path." The lightened glider moves up. If it ingests liquid from the outside bladder, it gets heavier and begins to drop.

Its first trans-Atlantic mission failed. Scientists believe the glider was punctured by a shark and sank.

But the second attempt by an 8-foot, yellow Slocum called "Scarlet Knight" — which derived its name from the Rutgers football team — bobbed up just off the coast of Spain in late 2009 after a 221-day, zig-zag voyage of 4,604 miles. It was intact.

The arrival was thrilling for one of the glider’s biggest fans, Richard Spinrad, then an assistant administrator of NOAA. He told The Philadelphia Inquirer: "We are data poor for understanding how the ocean operates, and this is going to give us the capability to understand this much better.

"If we can go across the Atlantic," he explained, "we can go just about anywhere with these."

According to Teledyne, they have.

Gliders have since found a variety of uses including tracking hitherto unseen currents that form part of the food web for ocean fisheries and measuring melting Antarctic ice shelves by sampling the declining salinity of water underneath them.

This year, NOAA’s Goni plans to use gliders as part of a three-pronged approach to studying hurricanes off the Atlantic coast. Their work will be augmented by autonomous "sail drones," unsinkable plastic vessels that can sail on storm-driven seas while the gliders are busy studying the salinity, temperatures and movements of water layers beneath them.

If a storm suddenly shifts direction, NOAA can parachute small, sensor-equipped cylindrical floats in its new path. They can report salinity, water temperature and speed so the probing can continue.

"This is not just about gliders or floats, it’s about combining everything, even satellite observations. When you put all that together, you have even more value to understand the ocean conditions," Goni explained.

The information is studied and used by a network of groups including the Navy, urban emergency planners and a variety of American universities where closing knowledge gaps about more muscular storms is a life-saving business.