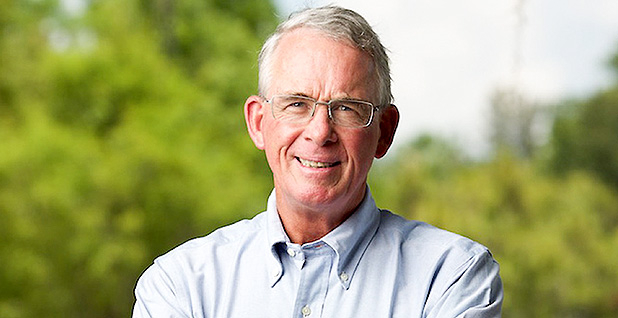 Rep. Francis Rooney (R-Fla.) has more energy industry financial holdings than any other freshman member of Congress, according to public documents. Photo courtesy of the Rooney campaign.

As he prepares to take over the White House later this month, President-elect Donald Trump has vowed to create "vast new wealth" in the nation via his plans to boost domestic fossil fuel production — and financial records show some of that predicted windfall could line the pockets of many of the newest members of Congress.

Investments in the energy industry — from stock holdings in major corporations like Exxon Mobil Corp. and Schlumberger Ltd. to individual oil and mineral rights — are not unusual among congressional lawmakers, and the newest 60-member class of House members and senators is no different (E&E Daily, July 17, 2015).

An E&E News review of personal financial disclosures filed by candidates in the 2016 election cycle found that more than one-third reported owning oil-, gas- or mining-related stocks, as well as individual mineral or oil rights, or serving on boards overseeing various energy companies.

Much like incumbent members of Congress, candidates are required to broadly detail their personal holdings in public financial reports — disclosing assets like stocks, bonds, savings accounts, rental homes and other income properties, along with liabilities like mortgages and student loan debt.

But candidate disclosures offer a unique look into a future lawmaker’s finances, since they give a more up-to-date view of the assets and liabilities a candidate holds.

Incumbent members of Congress are required to file a financial report each spring detailing their personal holdings for the previous calendar year. Candidate forms require information on the preceding calendar year, as well as any information for the year to date, typically about halfway through the current election year.

While members of Congress are required to file reports when they sell, purchase or exchange a stock, bond or other security if the transaction is valued at more than $1,000, there is no requirement for lawmakers to forfeit their investments upon assuming office.

Striking gold in the oil industry

Among E&E News’ findings were a number of freshman lawmakers who hold stakes ranging from a $1,000 to as much as $1 million in various energy companies.

Francis Rooney, the former U.S. ambassador to the Vatican and a Republican who succeeds retiring Rep. Curt Clawson (R) in Florida’s 19th District, enters Congress with the largest stake in the energy industry among freshman lawmakers, according to his June report.

A former member of the board of directors of Helmerich & Payne Inc., a Tulsa, Okla.-based petroleum contract drilling company, Rooney reported between $500,000 and $1 million in deferred compensation for his service, as well as five separate stock options valued between a combined $31,000 and $115,000.

Lawmakers and candidates are required only to report their holdings in ranges — categories start at zero and then go from $1 to $1,000 to more than $50 million — and few opt to provide specific data.

Rooney also reported owning between $500,000 and $1 million in Laredo Petroleum Inc. stock but noted he had not earned income from the tax-deferred investment. He likewise served on Laredo Petroleum’s board of directors for a three-year period, starting in 2014.

During the same time, Rooney also served as director of Manhattan Pipeline, a Tulsa-based construction firm in the oil and gas industry.

The Florida Republican listed two dozen other investments in various energy firms, including holdings of up to $15,000 each in Pioneer Natural Resources Co., Exxon Mobil Corp. and Rose Rock Midstream, and smaller investments of $1,000 or less in Kinder Morgan, Canacol Energy Ltd., Spectra Energy Corp. and Targa Resources, as well as partnerships with Antero Midstream and Energy Transfer Partners.

Following his election in November, Rooney told E&E News that he would make both the restoration of the Everglades and cleaning up the water in South Florida priorities in his first term (E&E Daily, Nov. 17, 2016).

Republicans aren’t alone in stashing their investment dollars in the energy industry.

In an amended version of her financial disclosure filed in December, Rochester also reported the trust holds as much as $100,000 each in the Murphy Oil Corp. and the Valero Energy Corp. Both investments earned as much as $2,500 in dividends in both 2016 and 2015.

Rochester’s other investments include between $15,000 and $50,000 each in Hess Corp., Kinder Morgan Energy Partners LP, Marathon Oil Corp. and Newmont Mining Corp.

Rosen also lists a trio of bonds under the trust, with investments in Alabama Power, Georgia Power and PECO Energy each valued at up to $50,000.

The trust also includes smaller investments of up to $15,000 each in the Southern Copper Corp., Anadarko Petroleum Corp., Apache Corp. and Spectra Energy Corp.

Rosen’s spouse also owns up to $15,000 in Great Plains Energy Inc., via investments in a separate IRA account.

Gottheimer’s financial report, filed in May, shows investments of up to $50,000 each in both Schlumberger and Exxon Mobil. He owns both stocks jointly with his spouse.

Florida Rep. Charlie Crist (D), who previously served as the state’s Republican governor before losing a bid for Senate as an independent in 2010, boasts a major investment in his home state’s energy industry, with as much as $250,000 in TECO Energy Inc. stock.

Crist reported capital gains of up to $50,000 in 2016 from his investment, according to his August financial disclosure report.

New Texas Rep. Jodey Arrington (R), who succeeds former Rep. Randy Neugebauer (R), is one of a trio of incoming freshmen to report ownership of oil rights, royalties or mineral rights in his November financial report.

Arrington, who previously served as both vice chancellor of Texas Tech University and president of the National Institute for Renewable Energy, reported oil rights on leased property in Plaquemines Parish, La., adjacent to the Mississippi River. The oil rights are valued at up to $15,000 and produced royalties of $1,000 or less in both 2016 and 2015.

Arrington previously reported ownership of Murphy Oil stock along with his spouse but appeared to have sold that asset in 2015, when he reported capital gains of up to $15,000.

Kennedy reported a mineral royalty interest in Livingston Parish, La., valued at between $1,000 and $15,000, although the stake produced no income in 2016.

He also reported mineral rights with the same value in Amite County, Miss., which has produced no income in recent years.

Kennedy also reported previously investing in Canadian Solar Inc., although he appears to have sold that stake for capital gains of $201 to $1,000

Freshman Kansas Rep. Roger Marshall (R) does not personally own any oil royalties, but he reported that his spouse and an unidentified dependent child do.

In his May financial disclosure, Marshall revealed his spouse owns between $100,000 and $250,000 in oil royalty interests via a holding entity named "Quivira Ranch Inc."

Marshall’s spouse also owns a working and equipment interest with the same description, valued at between $1,000 and $15,000. The lawmaker’s wife additionally claims a working interest in a Fort Worth, Texas-based drilling partnership, but the asset is listed as having no value.

Illinois Rep. Raja Krishnamoorthi (D) reported that both he and his wife own stakes in a mutual fund that describes itself as focused "on the large and diverse North American pipeline universe."

Freshman Arizona Rep. Tom O’Halleran (D), who represents a sprawling rural district with numerous mining deposits, reported a trio of stakes in mining companies, with each valued at between $1,000 and $15,000.

California Rep. Ro Khanna (D) does not claim any investments in the energy industry himself but does report more than a dozen entries under his spouse’s ownership.

Among the items held in a series of trusts for Ritu Ahuja are listings for companies including ConocoPhillips, Nucor Corp. and Marathon Oil, although many of the stocks appear to have been sold and are listed with values of zero.

But Ahuja did report as much as $500,000 in Entergy Corp.; up to $250,000 each in Genesis Energy LP, Phillips 66 Partners LP and Western Gas Partners LP; and up to $100,000 each in Antero Midstream Partners LP, Valero Energy Partners LP and Devon Energy Corp. as of mid-2016. At that time, she also listed smaller investments in American Electric Power Co., Chevron Corp., Kinder Morgan and Pioneer Natural Resources Co.

Khanna’s financial disclosure shows Ahuja holds investments of between $250,000 and $500,000 in both Danish Energy Investors and West Street Energy Partners.