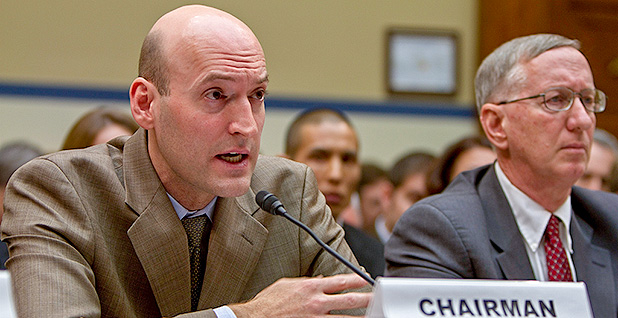 Gregory Jaczko’s tenure leading the Nuclear Regulatory Commission was plagued with agency infighting, accusations of mismanagement and, at the end, fireworks on Capitol Hill.

Today, the 48-year-old physicist is once again back in the spotlight.

Jaczko, a father of two who resigned his post as NRC chairman in the May of 2012, is traveling the country with a tell-all memoir about his time atop the commission. "Confessions of a Rogue Nuclear Regulator" dishes up details about his days as a Hill staffer, his turbulent beginning as NRC chief and, ultimately, his resignation.

But Jaczko also has a new message: Nuclear power won’t save us from climate catastrophe.

"From everything I’ve seen and experienced with this industry, I think that’s a fool’s errand, and I think it’s gonna fail the planet when it comes to dealing with climate change," Jaczko said during a recent interview before heading off to discuss his book at an event in Washington, D.C. "Nuclear is just not up to that task."

Jaczko is a Pennsylvania native who grew up around Albany, N.Y. He first came to Washington, D.C., in 1999 as a congressional science fellow after earning a doctorate in theoretical particle physics from the University of Wisconsin, Madison. For a little more than a year, he worked as a fellow for then-Democratic Rep. Ed Markey of Massachusetts before moving on to advise the Senate Environment and Public Works Committee on nuclear power.

In 2001, Jaczko began working first as appropriations director and then as a science policy adviser for former Democratic Sen. Harry Reid of Nevada, the most outspoken public foe of the stalled Yucca Mountain nuclear waste repository. Jaczko would be sworn in as a commissioner at the NRC under the Obama administration just four years later. And in 2009, President Obama designated him as the agency’s chairman.

But even before he took the reins, drama ensued, Jaczko revealed in the book. He shared how Rahm Emanuel, Obama’s then-chief of staff, said he was being offered the job as NRC chief to regulate a technology critical to Obama’s goal of thwarting climate change — but only after calling him derogatory names and warning his appointment would prompt "everyone" at the NRC to quit. "No one wants you to be there. I’m only telling you what no one else will tell you," Rahm told Jaczko.

In early 2011, Jaczko’s leadership would be tested when a magnitude 9 earthquake and tsunami slammed into the northeastern coast of Japan, triggering a massive accident at the Fukushima Daiichi nuclear plant, global alarm about radioactive release and evacuation, and a massive safety review of the U.S. nuclear fleet.

And within months, a different sort of challenge would emerge. In the summer of 2011, NRC’s inspector general accused Jaczko of "strategically" withholding information from his colleagues to thwart Yucca from advancing. That fall, Jaczko’s bipartisan colleagues — two Democrats and two Republicans — sent a letter to the White House accusing him of bullying and intimidation, a move that triggered a series of publicly bruising House hearings for Jaczko (Climatewire, Dec. 12, 2011).

Jaczko, who denied those allegations, maintains that the real fight was over policy issues and that he stood out as a thorn in the nuclear industry’s side. These days, he’s pushing for renewables through his company, Wind Future LLC, working in offshore wind and looking at a number of small micro-grid projects. He’s also spending time with his wife Leigh Ann Caldwell, a reporter for NBC News, and his two young children while teaching energy policy classes at Georgetown University.

Jaczko talked to E&E News about his book, climate concerns and facing off with Emanuel:

Why this book, and why now?

From everything I’ve seen and experienced with this industry, I think that’s a fool’s errand, and I think it’s gonna fail the planet when it comes to dealing with climate change, because nuclear is just not up to that task.

Do you think that nuclear power can be made safe?

I think the current type of reactors we have in this country will always operate kind of on this narrow precipice of safe operation and catastrophe on the other side.

Why can’t nuclear be a climate solution?

We have to look no further than the actions we took to license four new reactors while I was chairman. I mean, obviously I didn’t support those for reasons related to the Fukushima accident, but today, of those four reactors, two of them have been canceled, and the other two are years behind schedule and $10 billion over budget.

So I just don’t see how the facts about nuclear power being a viable technology to deploy en masse square with the realities of what we need to do for climate change. There are other solutions. There are better, cheaper, faster solutions that are out there, and that’s where we need to focus our energy and our time.

In the book, you wrote about an exchange with Emanuel. He called you a "fucking asshole" when he offered you the NRC chairmanship and warned you not to mess up.

That’s probably a question you’d have to ask him. I went into that meeting expecting to hear from the president and through obviously his representatives about what they viewed as the role of the chairman of the NRC. I think he had a reputation for a direct communication style, and I certainly experienced that head-on.

Any idea what role President Obama played in those discussions?

I don’t know other than what I was told in that particular meeting, that he had talked to the president about it and they made the decision to move forward because of really the effort that Senator Reid had made to convince them it was the right thing to do.

Ultimately, you denied accusations from your bipartisan colleagues of mismanagement and verbally assaulting your female colleagues. Why were those allegations made?

Those things and the way that they were described just simply didn’t happen.

I was saying and doing a lot of things at the time that were, you know, harmful in a way to the industry’s kind of aura of perfection, and people didn’t want to hear that.

They didn’t want to hear that coming from the chairman of the Nuclear Regulatory Commission, because those words carried weight. And, you know, I was pushing through reforms that, to this day, I think were really kind of mainstream, middle-of-the-road proposals that would’ve done a lot to make these plants a lot safer in the U.S.

It was amazing to me how quickly the commission walked away from those reforms and how little deference really was given to the people that did that report.

How is the nuclear industry affecting the NRC?

Do you differentiate between the commission and staff?

Absolutely. I’ve worked with some amazing people. Take, for example, the task force formed after Fukushima that recommended reforms. This was a group of people that we as a commission established a task force for, and then they went out and did this work.

So to me, it all comes back at the end of the day to that idea that the commission sets the policy and they set the tone, and right now, you know, it’s setting a tone that the agency is there to regulate but also to make sure that the industry survives. And I think that’s now the legal mandate, and I don’t think that’s the right mandate for the American public.

What did Reid say when you faced such allegations?

Senator Reid is always a person of few words, so he told me to hang in there. And, you know, there were times when I thought, "My gosh, I should just resign," and Senator Reid said to me, "Don’t resign" and "You’ll regret if you do. You’ve got to work through it." And that’s what I did.

And then, of course, you know, as I talk about in the book, there came a point in which, near the end of my time, when he did come to me and say, "I think for the future of the agency, we have an opportunity here to change leadership in a way that I think is gonna be good, for having somebody … who has a nuclear safety focus, and to do that I need you to resign." I took him at his word, and that’s what I did.

Did you act against Yucca Mountain at Reid’s behest? Or Obama’s campaign promise?

Would you have done anything differently?

I wish I had done everything in a way that didn’t give people fodder to make outlandish accusations about me because of my passion. But when it came down to the positions that I was advocating for, I don’t regret any of those, and I don’t regret fighting for the things that I fought for, and I don’t regret my time at the agency.