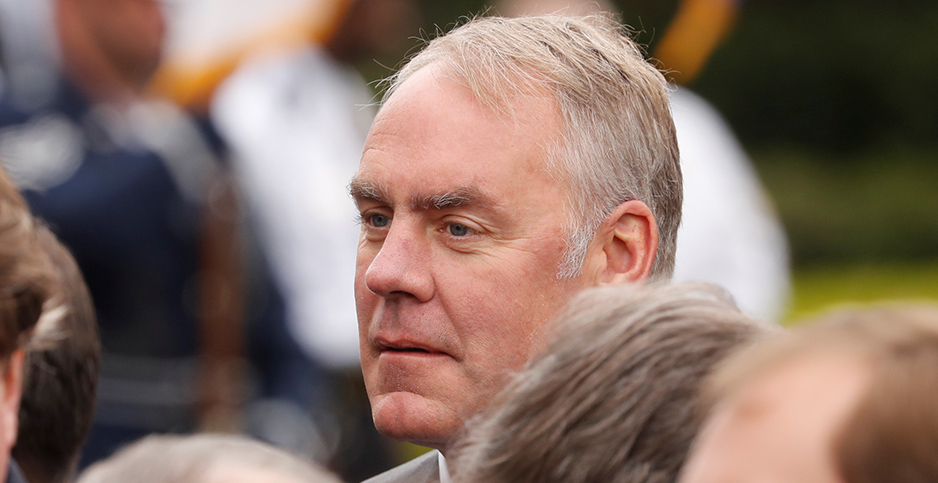 Interior Secretary Ryan Zinke rose through the ranks in the Navy as an aggressive risk taker. Jim Bourg/Reuters/Newscom

Interior Secretary Ryan Zinke rose through the Navy as an aggressive risk taker, a trait that’s rewarded in the elite special operations community but that can complicate careers in politics and bureaucracies.

In large ways and small, Zinke’s 23-year Navy career generally — and his service as a SEAL officer in particular — help explain his actions at Interior, some of which have gotten him bad press lately and could threaten his job security.

On one hand, his doggedness — a SEAL’s cultivated refusal to quit — endears him to key allies.

"That’s exactly what the president likes about him," said one senior administration official, speaking on condition of anonymity. "He is pushing through an absolutely aggressive agenda."

But the door-busting dash that propelled Zinke through the military may have also undermined him at Interior, where he’s faced repeated inquiries over his fidelity to the government’s standard operating procedures.

Zinke served several stints with the pirates, officially called the Navy Special Warfare Development Group and popularly known as SEAL Team Six. They were, in some ways, the defining chapters of Zinke’s life, a character-shaping period he now commemorates with his ever-present SEAL lapel pin.

"You want to know what kind of seagoing individual I was about to become? You guessed it. A rogue warrior," Zinke wrote, adding that "we trained harder, deployed longer, and viewed the conventional rules as guidance rather than the law."

Zinke’s Navy performance evaluations obtained by E&E News consistently lauded him, with one calling him "aggressive, determined and relentless in his pursuit of excellence." One "lapse in judgment" cited by a superior officer, involving travel pay, marred his stellar record.

Now Zinke’s future at Interior is challenged by several ongoing investigations, including one reportedly referred to the Justice Department. The inquiries, past and present, hint at a fast mover sometimes focused more on the mission than on the rulebook (Greenwire, Oct. 31).

"We will all be better off when Zinke has moved on from public service and is able to spend all of his time on his true passion: self-promotion," said Chris Saeger, executive director of the advocacy group Western Values Project.

Zinke has surrounded himself with military reminders in his current job. His chief of staff, Scott Hommel, is a Marine Corps veteran, and he hired two retired Navy SEAL captains, Mike Argo and Rick May, as deputy chief of staff and senior adviser, respectively.

Under Zinke’s command, the Office of Inspector General found, Interior spent $13,576.50 on "challenge coins" like those handed out by military leaders to boost morale. While the IG found no legal problems with the expenditures, the challenge coins caused some backlash.

When Zinke started a committee to raise money for his fellow Republicans, prior to joining Interior, he called it Supporting Electing American Leaders Political Action Committee, or SEAL PAC.

SEAL PAC was aggressive at fundraising while Zinke was still in the House, raising $3 million in 2015 and 2016. Only 4 percent of the total raised went to candidates, while 86 percent went to operating expenses, including about $28,000 in reimbursements to Zinke.

Zinke is no longer involved with the PAC.

Zinke’s SEAL legacy even had something to do with one of the earliest Office of Inspector General investigations into his Interior performance, an inquiry into travel that included a $12,375 chartered flight that took Zinke and four Interior personnel in June 2017 from Las Vegas to Kalispell, Mont. (E&E News PM, April 16).

In Las Vegas, Zinke spoke on the night of June 26, 2017, to an audience of about 44 hockey players, plus team staff and coaches. He was scheduled to be in Montana the next morning for a meeting. The Las Vegas speech ended after the last commercial flight had left the local airport, prompting the chartered flight.

"He said he spoke to them as a former Navy SEAL instructor and stressed the importance of working hard, staying out of trouble, and maintaining their focus," the IG recounted.

The IG concluded that Zinke’s use of chartered aircraft in 2017 "generally followed relevant law, policy, rules, and regulations."

Still, the IG added that "if ethics officials had known Zinke’s [Las Vegas] speech would have no nexus to the DOI, they likely would not have approved this as an official event, thus eliminating the need for a chartered flight."

While Zinke was in the service, Interior officials have noted, his wife, Lolita, assumed spousal responsibilities that one official likened to that of an ombudsman.

According to Interior’s IG, a department ethics official recounted that "in response to a news article about Lolita Zinke’s traveling with her husband, Secretary Zinke had told [Principal Deputy Solicitor Daniel] Jorjani to tell the media that his wife was an ombudsman for the DOI, but Jorjani responded that they could not say that."

"Ultimately, the employees advised him that making her a volunteer could be perceived negatively, and she did not become one," the IG recounted.

Zinke also explicitly applied his military mindset to his proposed reorganization of the department, the massive undertaking that’s consumed considerable time and energy and that now faces fresh challenges with the Democratic takeover of the House.

"My priority, so you know, is from a military point of view," Zinke told Interior employees in March 2017, stressing the need to support the department’s workers "on the front line" whom he likened to "the sergeants and the chiefs" that provide the military’s backbone.

Instead of Interior’s current arrangement, where bureaus have more than 40 distinct regions, each with its own geographic boundaries, Zinke has proposed 13 regions. He drew his inspiration from the military’s unified combatant command structure (Greenwire, Feb. 23).

"All operations have risk," Zinke wrote in his memoir. "The art is to mitigate risk as much as you can while striking as soon as you can."