Romney, almost a senator, has talked of ‘climate realities’ 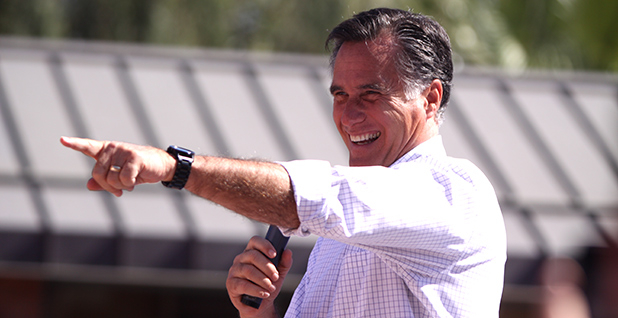 Mitt Romney’s likely election to the Senate next month has triggered a new round of questions about how he views climate change and what — if anything — he wants to do about it.

Would Romney, as Utah’s next senator, have more in common with his positions as Massachusetts governor — a tenure marked by an interest in reducing greenhouse gas emissions?

Or would he double down on comments he made during the 2012 presidential campaign — in which he said that "we don’t know what’s causing climate change on this planet" and that it’s not smart to spend "trillions and trillions of dollars to try and reduce CO2 emissions."

That dynamic, coupled with Romney’s political history, has turned the 71-year-old into one of the biggest climate wild cards going into the next Congress.

In February 2017, Romney wrote positively of a proposal that’s been making the rounds in climate circles.

"If he’s elected, as with any member, we would expect to meet with his office," said Greg Bertelsen, senior vice president with the Climate Leadership Council. "We know he has been someone who has been thoughtful on this issue in the past, and so we would anticipate it to be a positive discussion."

During Romney’s term as governor from 2003 to 2007, he tussled with a coal-fired power plant, released a 52-page climate plan and showed interest in a regional cap-and-trade market for greenhouse gas emissions with other Northeast states — though he never went through with it.

"In Romney’s first term … he was very progressive in terms of climate change," Clarke said. "He put together a very good staff, who I worked with closely, from an advocacy point of view."

Romney’s first bid for president in 2008 didn’t advance past the Republican primary, but he rebounded in 2012 and emerged as the GOP alternative to Obama.

His current campaign for Senate echoes that 2012 approach, with its noted support of Utah’s coal-powered utilities.

"We are fortunate Utah’s coal power plants, which provide over 75 percent of our electricity, are at the forefront of the clean coal industry," notes Romney in one of the three sentences his campaign website dedicates to the issues of clean air and energy.

When asked how she differed from Romney on climate policy, Wilson said in a phone interview that "one of the strengths that I have as a candidate is that I’m clear and I’m consistent."

"We’re not going to be able to recover from this quickly," she said of Trump’s impact on the planet.

Jim Holtkamp, a Salt Lake City attorney who taught environmental law classes at the University of Utah, said the state’s attitude toward climate has shifted. And Romney has an opening to take action.

"If he decided personally it would be something he would really push, I don’t think he’d be hurt politically," Holtkamp said. "Most people in the state I don’t think feel strongly one way or another about climate change."

State officials were criticized by green groups for their widespread support of Trump’s decision to reduce the size of two national monuments in Utah: Bears Ears and Grand Staircase-Escalante. That support was a big reason why the Outdoor Retailer trade show moved its multimillion-dollar event from Salt Lake City to Denver.

"Massive, destructive wildfires are no longer the exception," Romney wrote in a letter on his campaign website. "Climate realities mean they will be a recurring menace every year. It’s high time for government to do something about them."

But that’s not enough, argued Wilson, Romney’s opponent. She said it was critical to confront global warming itself. "Gov. Romney has missed the point here," she said. "We must address climate change as a national crisis in order to protect the American West."

Faced with Romney’s mixed record, one Utah advocate for renewable energy struck an optimistic tone when asked about the prospect of having him in the Senate.