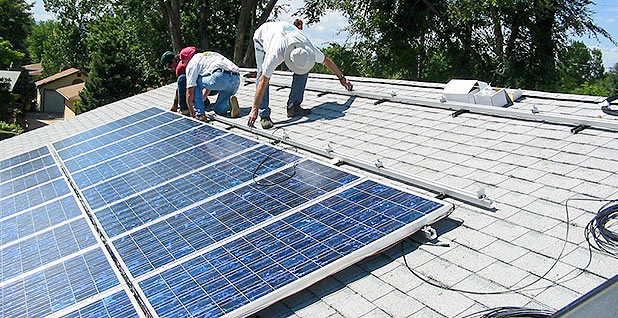 Oakland, Calif.-based Sungevity Inc. declared bankruptcy Monday, the latest episode in a year of wrenching changes for some of the solar industry's biggest players. Photo by Pete Beverly, courtesy of the National Renewable Energy Laboratory.

A top rooftop solar installer went bankrupt this week, the latest episode in a year of wrenching changes for some of the industry’s biggest players.

Sungevity Inc. declared insolvency Monday and did a chaotic layoff of more than half its workforce late last week. According to a former employee, a $200 million lifeline of funding fell apart after Donald Trump’s election made investors skittish.

Solar adoption is climbing sharply, and business is booming for many installers. But some of the biggest firms, from SolarCity Corp. to Vivint Solar Inc. to NRG Home Solar, have had a turbulent year as they were acquired or abandoned by larger companies outside the solar space.

Sungevity was founded in 2006, in the same era as its California competitors, SolarCity and Sunrun Inc., and all had aspirations to take global enthusiasm for solar power and scale it to national or international proportions.

The road ended ignominiously Monday for Sungevity. Even more than its competitors, the company sought to portray its business as a crusade against fossil fuels.

The company raised more than $850 million in financing during its decadelong run, but it was never able to turn a profit. As of January, the company had 700 employees, operating in 14 states and in four countries in Europe.

One of its co-founders, a former Greenpeace activist named Danny Kennedy, wrote a 2012 book called, "Rooftop Revolution: How Solar Power Can Save Our Economy and Our Planet From Dirty Energy" (Energywire, Feb. 4, 2016)

The end of Sungevity is also a blow for Oakland, Calif., the gritty sister city to San Francisco that is adjacent to the Silicon Valley technology boom but hasn’t shared in the wealth. With its bright-orange logo and a relentlessly positive attitude, Sungevity — at least as Kennedy told it — was positioned as the anchor of a hub for the nascent solar industry, and the company participated in several renewal projects with city leaders (Energywire, Feb. 28, 2014).

Kennedy, who stepped back from management at Sungevity two years ago and is now the managing director of CalCEF, a clean-energy funding organization, declined to comment yesterday on the bankruptcy.

The rooftop solar industry is made up of many small, local installers and a few larger companies that operation nationally or regionally and claim the largest market share. Three of the largest have recently had a wild ride.

According to GTM Research, a clean-energy analysis firm, the top-ranked player is SolarCity, which was acquired last November by Tesla Inc., best known for its high-end electric cars.

The solar panels, now rebranded as Tesla, will be sold in Tesla’s bustling auto showrooms. Meanwhile a new product, solar shingles, will make their debut. Supporters call it brilliant to bring SolarCity under Tesla’s sexy falcon wing, while critics see the merger as a bid to bury SolarCity’s unsavory financials inside a bigger company.

Meanwhile, the No. 2 company, Vivint Solar, replaced its CEO in December after the global solar company that planned to acquire it, SunEdison Inc., went bankrupt in April.

The No. 6 company, NRG Home Solar, essentially killed off its solar business last month, a year after its parent company, NRG Energy Inc., scaled back its plans for renewable energy (Energywire, Nov. 7, 2016).

Meanwhile, two other leaders, Sunrun (No. 3) and Trinity Solar Inc. (No. 4) of New Jersey, continue to prosper, along with local installers, many of which are doing well (Energywire, June 23, 2016). Sungevity, despite its recent troubles, was No. 5 in GTM’s ranking.

"It’s difficult to take what happened to [Sungevity] and draw conclusions about what this means for everyone else," said Nicole Litvak, a solar analyst for GTM. "It doesn’t mean anything for the industry as a whole."

Story of a fall

Sungevity intended to be what it called a "asset-light" installer, performing every part of the rooftop process but the installation itself, which it farmed to contractors.

"It seemed like a good model, and it seemed to work for a long time," said Litvak. "What seemed to have happened over the years is they simply began to do less but spend more."

From 2010 to 2015 the company averaged a 77 percent growth rate, according to bankruptcy filings. Its U.S. market share crested at almost 3 percent in 2014 and stood at 1.6 percent as of the third quarter last year, Litvak said.

But in recent years it outsourced more and more of its tasks. For financing it relied on partners, including its competitor Sunrun. It developed a network of resellers, and in Europe it co-branded its products with the utility Engie SA. Sungevity crafted a retail relationship with big-box store Lowe’s Cos., which it now owes over $1 million.

Mostly what remained was a software platform that was the company’s special sauce.

The technology used a combination of satellite maps, software algorithms and information from utility bills to let a customer design a system, determine its costs and sign on the dotted line, with only one visit from an actual Sungevity staffer. The system was supposed to cut an expense that dogs every installer: the cost of winning new customers.

But that model had its problems, including runaway costs with issues at homes that couldn’t be found in a satellite picture, like bad roofing or difficult wiring.

"The companies that outsource their installation don’t seem to work," said Mike Kleeman, the founder of West Coast Solar, a Bay Area solar and roofing business that once did an installation for Sungevity. "You don’t have any idea until you have boots on the ground what you’re dealing with."

Also, in a bid to make itself more attractive to investors, Sungevity vastly overinflated the amount of business it could get from its resellers, according to a Sungevity sales representative who was laid off Thursday and who requested anonymity in order not to harm his career prospects.

"We shot ourselves in the foot by over-predicting what those partnerships were going to bring in," the salesman said.

In early 2016, "the company found itself in the midst of liquidity crisis brought on by its implementation of an aggressive growth strategy that led to an overly leveraged balance sheet," according to a bankruptcy filing by the president, Andrew Birch.

Late last year, the company had nearly finalized an unusual "reverse merger." Rather than enter public markets through an initial public offering as most companies do, it planned to merge with another public company, Easterly Acquisition Corp., which was merely a shell that would then assume Sungevity’s identity.

The deal was supposed to deliver Sungevity a $200 million cash infusion. However, in November the amount was reduced to $100 million, and on Dec. 31, Easterly pulled out of the deal, according to bankruptcy documents. Even as the deal dissolved, the terms of it prevented Sungevity from seeking alternate sources of financing, according to bankruptcy documents.

Easterly began backing away from the deal immediately after the Nov. 8 election of Trump, who campaigned with a warm embrace of growing jobs in the fossil fuel sector and a skepticism of climate change.

"We realized things like the ITC [investment tax credit] and other things that allowed people to go solar was all subject to change," the salesman said.

The company managed to get a $9.5 million bridge loan in late January, but it was unable to find a long-term suitor because of its money-losing habits. The company laid off 91 people in January and about 330 on March 9, and has a remaining workforce of 246 employees, according to a bankruptcy filing.

The Sungevity sales rep described a disorganized layoff process, where employees learned of their termination through their pay stubs rather than from management. Workers were let go from the cash-strapped firm without severance, accrued time off or commissions they had earned.

It was an ugly end for a company that otherwise was well-regarded by its staff.

"Up until the second-to-last day, I have nothing bad to say about the company," said the salesman, who said he is still owed $15,000.

A group of investors led by Northern Pacific Group, a private-equity firm based in Minneapolis, will provide up to $20 million to keep Sungevity afloat until a sale by the end of April, according to a press release.

Meanwhile, hundreds of Sungevity employees are on the market, and some are finding themselves in demand.

"I am in the parking lot of a national competitor as we’re talking," said the former Sungevity salesman, who said that he’s getting plenty of offers for work in the solar industry.

Despite the interest, the unpredictable course of solar is giving him pause. "It comes with the caveat of uncertainty," he said.