Rule rollbacks could hurt Trump voters the most 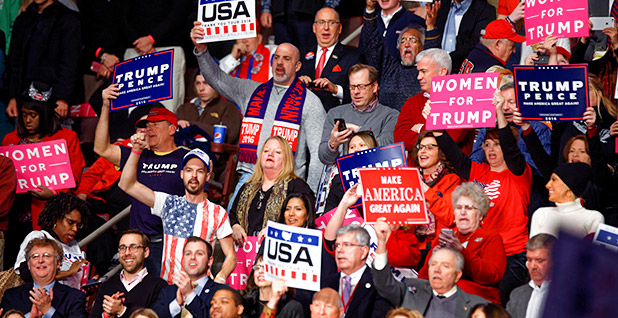 New research suggests that President Trump was supported by voters in counties with high levels of air pollution. Michael Vadon/Flickr

The Trump administration’s rollbacks of regulations on coal plants would disproportionately hurt those who voted for the president, a new study has found.

Rolling back air pollution protections, as President Trump’s EPA has considered, would increase premature deaths by up to 40,000 more people annually, according to the research recently published in the journal Energy Policy.

The researchers found that increases in fine particle pollution stemming from EPA’s efforts to trim key environmental rules would directly affect the white and rural voters who make up Trump’s base.

"Voters who brought Trump victory and residents of coal communities are among those who have benefited the most from the air quality improvements that have flowed from the US’s dramatic decrease in coal-fired power plant pollution," the authors wrote. "Those same voters have much to lose from coal-favoring policies that would undermine the mercury and transport rules."

The agency’s own analysis has found that replacing the Obama administration’s Clean Power Plan to restrict power plant emissions with the Trump EPA’s proposed Affordable Clean Energy rule would cause an additional 1,400 deaths. A number of the nation’s oldest, and dirtiest, power plants are in the counties that voted for Trump.

The new study examined the PM2.5 reductions achieved by the Cross-State Air Pollution Rule and Mercury and Air Toxics Standards and compared them to voting records from the 2016 election results. Researchers looked at PM2.5 concentrations of a pre-regulatory emissions scenario developed for power plants in 20 Eastern, Midwestern and Southern states that are consumers or producers of coal.

States that benefited from air pollution regulations the most, and thus would suffer the most under a regulatory rollback, included the key swing states of Ohio and Pennsylvania, according to the study. They also include states that heavily voted for Trump, such as Indiana and West Virginia.

But the health effects will not be felt by only Trump voters. Rollbacks will also affect those who live in the "Black Belt," a rural swath of Southern states largely populated by poor African-Americans, researchers found.

"Some very vulnerable communities in terms of health would could be hurt by the lack of these rules, and here I’m talking about coal mining counties and Black Belt counties, those are areas that already suffer from lower life expectancy than the rest of the country," said Vivian Thomson, the study’s lead author and a retired environmental studies and politics professor at the University of Virginia. "They already suffer from poorer health outcomes."

In all, the researchers found that allowing emissions to remain at 2007 levels would cause between 17,176 and 39,291 additional premature moralities yearly. One caveat researchers were careful to note, though, is that while regulations drove down emissions, natural gas rose as a power source while coal declined, and some states also formed their own regulations.

Trump has made a revival of the coal industry a priority since his campaign. But nearly two years into his tenure, coal-burning power plants continue to be shut down at a rapid pace as natural gas steadily eats away at coal’s market share. The administration has blamed Obama-era climate regulations as a major source of the industry’s decline, but energy experts have long said market factors are driving the closures.

Thomson said the study shows a disconnect between the administration’s coal policies and preserving the health of those who live there.

"On the one hand, there is this rhetoric about ‘Protect coal mining communities; we’re going to revive them,’" she said, "and on the other hand, there is a devotion to policies that would seem to reverse important air quality gains in those communities and obviously a lot of other communities."