Rule’s demise looms, but how Trump will ax it remains unclear 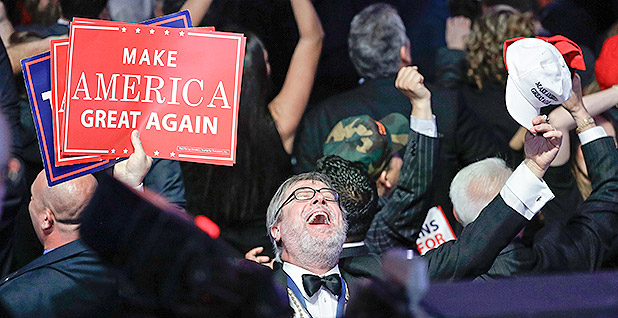 The Obama administration’s carbon rules for power plants are in dire straits after last night’s election of Republican businessman Donald Trump as president.

"There are a lot of new unknowns in the mix," said Jack Lienke, an attorney at New York University’s Institute for Policy Integrity.

In September, a panel of 10 judges on the D.C. Circuit held nearly seven hours of oral arguments in the massive litigation. The court is expected to issue a ruling in early 2017, but it’s unclear exactly when.

Former Secretary of State Hillary Clinton, who had a lead in polls going into yesterday’s election, had been expected to stay the course on the Clean Power Plan and continue defending the rule in court. But Trump has pledged to overturn the rule among a host of Obama administration regulations.

"One of the first things a Trump administration would do is submit a letter to the court saying that they plan to revoke the rule and asking for a voluntary remand," Holmstead said. "I don’t know if they were to grant that — it depends on how close they are to reaching a decision."

"Certainly there’s the possibility that if they’re still wrestling with the case come Jan. 20, you could see DOJ filing something that withdraws their advocacy for the rule," said Lorenzen, a former Department of Justice attorney. "But I don’t think that will interfere with the D.C. Circuit’s view that it has to rule on the lawfulness of the rule."

It’s "a little bit hard to anticipate" exactly what the court would do between now and Jan. 20, Fulton said.

"It’s also possible that the court, being observant itself of what’s happening and how politically charged this rule is, could decide on its own to kind of slow-walk it until the new administration is in place," Fulton said.

Legal experts today outlined possible scenarios for the litigation’s fate if it continues to play out in the D.C. Circuit.

If the D.C. Circuit strikes down the rule, it’s likely the Trump administration will sit out an appeal to the Supreme Court, legal experts said. Other groups involved in the litigation may petition justices to take up the litigation, but the rule there may face an uphill battle in the form of a conservative-tilted court.

That scenario, for example, played out over EPA’s authority to regulate greenhouse gases. During the Clinton administration, while it ultimately didn’t issue regulations, EPA’s general counsel said the Clean Air Act gave EPA the authority it needed. The George W. Bush administration disagreed.

In another example, when the Obama administration took office, it chose not to appeal the D.C. Circuit’s ruling striking down the Bush administration’s Clean Air Interstate Rule and Clean Air Mercury Rule.

It’s possible that the same Justice Department attorneys who have defended the Clean Power Plan could find themselves arguing against it during a Trump administration, Lorenzen said.

But environmental and public health organizations and EPA’s state allies that have intervened in the case would likely still defend the rule, Lienke said.

Regardless, it’s highly unlikely for President Obama’s Supreme Court nominee, Merrick Garland, to play a role in the Clean Power Plan’s legality, experts said. Garland, the D.C. Circuit’s chief judge, recused himself from all litigation while his nomination was pending.

If the courts were to uphold the Clean Power Plan, Trump’s EPA would have to go through a formal rulemaking with public notice and comment to rescind the rule.

"You have to look at the opinion that just came out of the D.C. Circuit. … You have to explain the rationale for choosing to revoke the Clean Power Plan," Holmstead said. "It’s possible the D.C. Circuit will say that the Clean Power Plan is based on a reasonable interpretation. It’s not going to say that EPA was legally compelled to do it that way."

Another potential scenario: The Trump administration could take steps to revoke the Obama administration’s rule for limiting carbon emissions from new power plants, a legal prerequisite for the Clean Power Plan.

Gerrard of the Sabin Center said he still expects the market to move away from coal even if the Clean Power Plan or some form of the rule doesn’t survive.