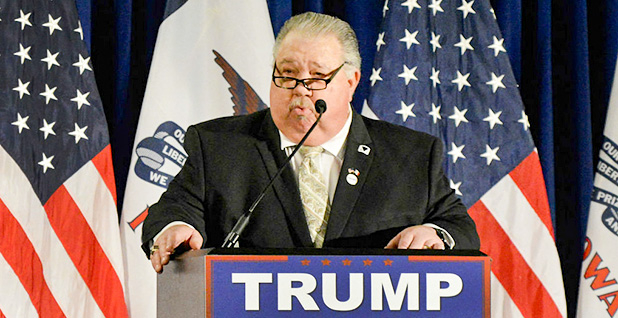 President Trump may be adding to his administration’s challenges by picking someone without a science background to head the Department of Agriculture’s research programs, former Agriculture Secretary Dan Glickman said today.

The Clinton administration official told E&E News that, while he doesn’t know Sam Clovis — reported to be Trump’s pick for undersecretary for research, education and economics — scientific knowledge is especially useful in a position that requires coordination with scientific agencies within the government.

"Not to have someone with a scientific background in that position is going to be challenging for them," Glickman said.

Clovis’ likely nomination, reported by the farm magazine Agri-Pulse and ProPublica, raised caution among advocates for agricultural research, who say they worry the administration will pay less attention to the effects of climate change on wheat and other vital crops, among other issues. The position is one of the key undersecretary slots at the department, groups involved in agricultural science said.

"He’s a political hack. He’s a political talk show host," said a representative of one group that advocates for some of the programs Clovis would oversee, who requested that his name be withheld because of ongoing work with the agency.

While the position demands either scientific background or problem-solving skills in a big bureaucracy, this advocate said, "he’s not either of those."

Clovis, 67, was a co-chairman of Trump’s campaign and a top adviser on agricultural issues. He’s from Sioux City, Iowa, and is a former college economics professor and conservative talk radio host. He has a doctoral degree in public administration from the University of Alabama.

He joined the Trump campaign in the summer of 2015, switching from Rick Perry’s campaign, and helped Trump build support among conservative, rural voters in Iowa who remembered Clovis’ own run for U.S. Senate there (Greenwire, Nov. 7, 2016).

Glickman said that he doesn’t know Clovis but that the lack of background in the issues he would handle stands out. Responsibilities include research on crop pests and diseases, the effects of pesticides, and the response to animal diseases such as avian flu — which has been on the rise. He would interact on a regular basis with scientifically savvy officials at the National Institutes of Health and other agencies and would need to understand the language, Glickman said.

"The whole agricultural world depends on this," said Glickman, who serves on the board of directors of the Foundation for Food and Agriculture Research.

"I wouldn’t be qualified for that job, I don’t think," Glickman said.

While the choice of Clovis is clearly a break from past administrations, the most important qualification may be a good understanding of agriculture and the workings of the federal land grant college system, where much of the publicly supported research is done, said Lee Van Wychen, science policy director for the Weed Science Society of America.

As long as Clovis demonstrates that kind of knowledge to WSSA members, "I think that’d be OK with them," Van Wychen said.

And while his advanced degree isn’t in science, "it’s not as if he’s completely out of the loop in higher education," Van Wychen said.

Clovis has built support among farm groups in Iowa.

"At first blush, it would seem like a good fit for Sam," said Monte Shaw, executive director of the Iowa Renewable Fuels Association, who once tried to recruit Clovis to write a research paper for the organization. "He is incredibly intelligent and has an academic background."

The choice of Clovis reflects a wider approach in the administration that steers away from scientists, said Rush Holt, executive director of the American Association for the Advancement of Science and a former Democratic congressman from New Jersey.

"It’s not just about having a science adviser. It’s having science present in each agency, at all levels," Holt said.