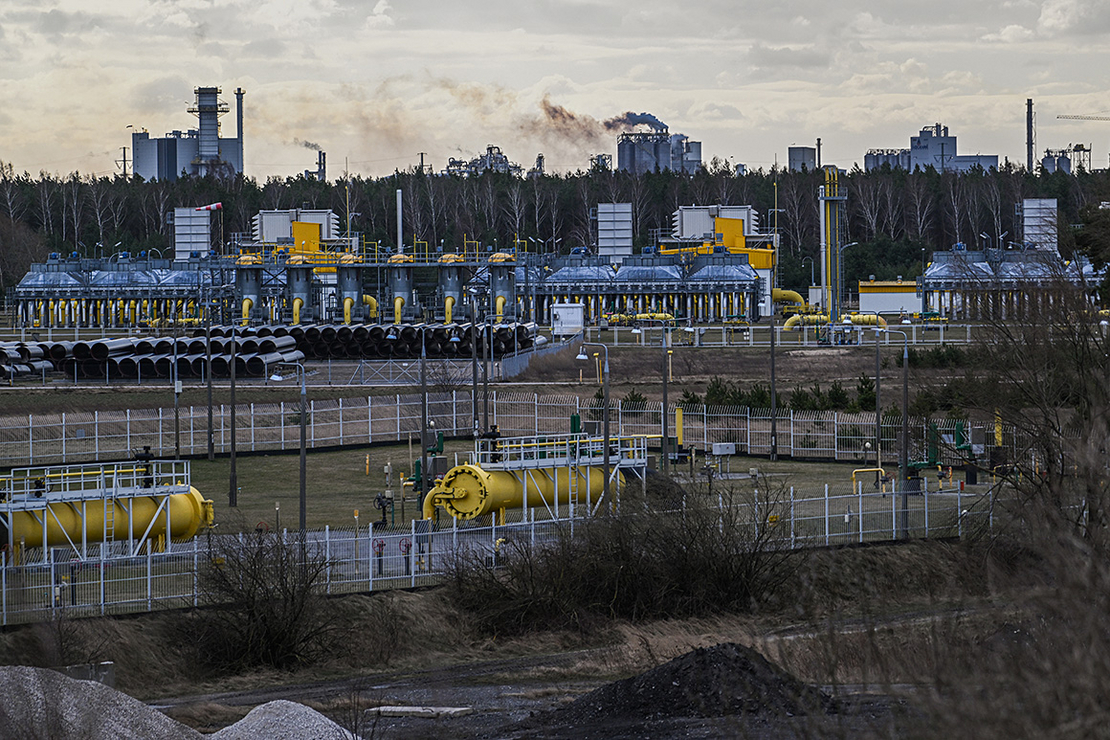 A view of the Yamal pipeline in Wloclawek, Poland, in February. The pipeline transports gas from Russia to Poland and Germany. Omar Marques/Getty Images

Russia told Poland and Bulgaria yesterday that it will stop providing natural gas to both countries, marking an escalation in the conflict between Moscow and Europe over the war in Ukraine.

A halt in gas shipments to Poland would rupture a trade relationship that has existed since before the Cold War, and raises questions about whether Russia would withhold gas from other European nations as it becomes increasingly ostracized for waging its brutal war in Ukraine.

Gas and other fossil fuels from Russia play an important role in powering Europe’s grid, heating homes and fueling industry. Last year, Russia accounted for 40 percent of Europe’s gas supply. The European Union aims to dramatically decrease its reliance on Russian fuels by 2030.

“No one has any idea what is going to happen,” said Gernot Wagner, a climate economist at New York University who tracks Europe’s energy markets. “Everything is on the table.”

European officials and energy analysts have fretted about the potential of an interruption in Russian gas flows ever since Russian President Vladimir Putin ordered the invasion of Ukraine on Feb. 24.

The war has prompted a wave of pledges from European leaders promising to wean the continent off Russian gas. The European Union outlined a plan to cut Russian gas imports two-thirds by year’s end. That has led the United States to send a surge of U.S. liquefied natural gas to European ports (Climatewire, April 1). Yet gas flows to E.U. countries have largely continued uninterrupted since Russian troops invaded Ukraine.

Officials in Poland and Bulgaria said they had been informed by Gazprom, the Russian gas giant, that gas flows would cease after they refused to pay for shipments in Russian rubles. Analysts said the announcement could be a warning by Moscow to other European countries that might refuse to pay for gas using Russian currency. Putin has required importing nations to pay for their gas shipments in rubles as a way to buffer the Russian economy from the financial reverberations of the invasion.

“I assume this is just the beginning, this is the opening act,” said Nikos Tsafos, an analyst who studies gas markets at the Center for Strategic and International Studies. “A lot of countries have said they are not going to pay in rubles.”

Europe benefits somewhat from the timing of the announcement. A halt of gas flows during the spring is far less damaging than an interruption during the winter, when Europe is reliant on gas to heat homes. It also gives time for the continent to build its storage inventories for the coming winter. European storage levels are above 2021 levels, when a cold winter helped drain the continent’s stockpiles, but remain below their five-year average.

“In terms of coping with a short-term interruption, this is about as good as a time to experience this,” Tsafos said.

Still, the challenge facing Europe is enormous, he said.

“We are not super well-equipped mentally to manage this,” Tsafos said. “I think it is going to require some attention to detail to start thinking how different countries are affected, who can make do with what.”

Poland and Bulgaria underscore those varying circumstances. Russian gas is transported to Poland via the Yamal pipeline, which continues on to Germany. Flows via Yamal have dropped off dramatically in 2022, declining from 719 million cubic meters this time last year to 121 million cubic meters last week, according to data compiled by Bruegel, a think tank.

Yet Poland is relatively well positioned to navigate a suspension in Russian gas. The country has built a LNG terminal on the Baltic Sea and has already filled nearly three-quarters of its gas storage, according to the European Network of Transmission System Operators for Gas.

Russian gas enters Bulgaria via the TurkStream pipeline, which travels under the Black Sea. TurkStream flows this year have largely eclipsed 2021 levels, though they have fallen off in recent weeks. Reuters reported that the country’s gas storage is at 18 percent of capacity.

Bulgaria’s situation is indicative of the challenges European countries will face in filling their storage inventories before winter. A new E.U. directive requires countries to fill 80 percent of their storage capacity by Nov. 1.

“It seems that the E.U. may be able to fill the gap with LNG in the short term, but there is simply not enough gas for storage injection,” said Yan Qin, an analyst at Refinitiv.

Gas prices are likely to remain elevated, she said. That is a boon for coal plants, which have been operating at high levels. Renewable energy output increased in April and will likely offer a boost throughout the summer, but that could be offset by a large number of French nuclear plants coming offline for maintenance and low output of hydropower in Norway.

“My anticipation is that the high power and fuel prices will lead to more demand destruction in Europe as more industrials will be forced to curb output,” she said.

European gas consumption for heating fell about 5 percent this winter compared with last year, thanks to relatively mild temperatures, according to the International Energy Agency. Industrial demand was down 6 percent during heating season.

Gas consumption in the electricity sector has shrugged off high prices and an increase in coal and wind generation, thanks in large part to reductions in hydro and nuclear output, the agency said. It estimated first-quarter gas generation was up 1 percent compared with last year. Coal generation, by contrast, was up 9 percent.