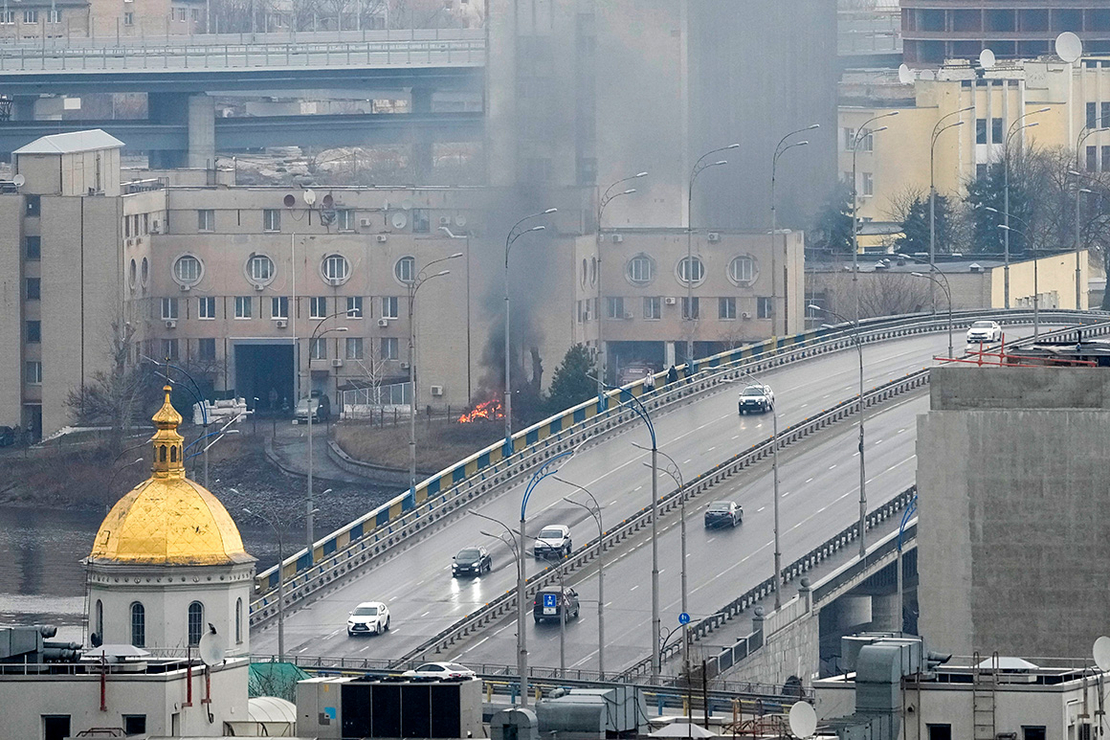 Smoke and flame rise near a military building after an apparent Russian strike in Kyiv, Ukraine. Efrem Lukatsky/Associated Press

President Biden today promised to impose “severe” new sanctions on Russia for its invasion of Ukraine, which escalated last night and made stock prices fall and energy prices continue to rise.

The war in Europe is also affecting U.S. politics on energy and climate change, with Republicans escalating concerns that the Biden administration’s policies are making the world more vulnerable to Russian aggression.

The president had a virtual meeting with Group of Seven allies this morning to discuss the global response to Russia attacking communities around Ukraine and fighting reported around the Chernobyl nuclear plant.

In a statement overnight, Biden said, “[T]he United States and our Allies and partners will be imposing severe sanctions on Russia. We will continue to provide support and assistance to Ukraine and the Ukrainian people.”

The West, hoping to avoid a full-scale war, has been warning of such measures for months. Still, Russian President Vladimir Putin opted to invade a nation he sees as illegitimate, particularly as its aspirations focus on the West.

Media reports indicate Russian forces entered Ukraine from various points, including Belarus and the contested region of Crimea. There have also been explosions reported throughout Ukraine.

Ukrainian President Volodymyr Zelenskyy said Russian forces are fighting to take the Chernobyl nuclear plant area. The site is home to multiple radioactive waste storage and disposal sites, and sits between the border with Belarus and the Ukrainian capital of Kyiv.

Crude oil prices surged past $100 a barrel for the first time in nearly a decade as a result of the turmoil. Markets are worried the instability and ongoing sanctions push — and potential retaliation from Russia — could restrict production.

Biden has been preparing Americans for rises in energy prices, which have already been high because of pandemic-related disruptions. The president has promised to take steps to limit the pain at the pump.

The U.S. is not expected to impose tough sanctions on the Russian energy sector out of concern for the stability of global markets, according to POLITICO.

The White House is said to be considering another release from the Strategic Petroleum Reserve. The administration announced releases following Hurricane Ida in September and as inflation was taking hold in December.

Asked by reporters yesterday, White House press secretary Jen Psaki said about drawing down the SPR, “That is certainly an option on the table.”

A bipartisan group of senators was negotiating a massive sanctions package but couldn’t come up with a plan both sides felt would deter a Russian invasion of Ukraine, punish Putin for escalating tensions and also prevent hurting energy markets. Congress left for recess knowing the president would probably have to act on his own.

Now, as Russia invades, there is at least some unity on Capitol Hill in calling for stronger sanctions to punish Putin.

Sen. Bob Menendez (D-N.J.) said, “As Chairman of the Senate Foreign Relations Committee, I am committed to ensuring that the United States upholds our responsibility to exact maximum costs on Putin, the Russian economy, and those who enabled and facilitated this trampling of Ukraine’s sovereignty.”

Ranking member Jim Risch (R-Idaho) said, “The repercussions of this invasion will be painful and swift. The only way to avoid this reality is for Putin to reverse course, immediately.”

Unity only goes so far in the current political environment.

Rodgers said in a statement, “Energy security is national security. It’s now clearer than ever what is at stake when anti-American energy policies make us and Europe more dependent on Russian oil and natural gas.”

Scalise said, “President Biden wasted too much time appeasing Putin while shutting down energy exploration and production here in America. That strategy failed, and needs to be reversed immediately.”

The conflict may also have repercussions on the debate surrounding the budget reconciliation bill, with Biden expected to trumpet last year’s infrastructure package and hopes for the rest of the year during Tuesday’s State of the Union address.

Senate Energy and Natural Resources Chair Joe Manchin (D-W.Va.), a pivotal player in the reconciliation fight, said today, “In response to the direct invasion of a sovereign state, the United States and our allies around the globe must take immediate action and impose crippling sanctions to address Russia’s anti-democratic, aggressive actions.”

Beyond the energy markets, lawmakers and the administration are concerned about cybersecurity and potential Russian attacks on U.S. infrastructure and supply chains.

Senate Intelligence Chair Mark Warner (D-Va.) warned in multiple television interviews this morning that in retaliation for sanctions, Russia “could strike back on the West” by targeting “critical infrastructure as well,” noting “cyber warfare, hybrid warfare that we’ve talked about in the past.”

“Russia has not fully unleashed its cyber capabilities,” Warner said on CNN. “If the Russians launch a more massive cyberattack and, for instance, shut down all the power in Ukraine … that cyberattack could bleed into eastern Poland, where there are American troops.”

Sen. Marco Rubio (R-Fla.) told CNN, “Ukraine is a pretty substantial food producer in wheat and corn. That will have an impact on the global food market, which ultimately would have an impact on us as well. They actually are the leading supplier of neon gas for our nascent semiconductor industry here in the United States. That’s going to be cut off. So there are some impacts there.”

The Edison Electric Institute, a group of investor-owned utilities, said companies were on heightened alert.

“Protecting the nation’s energy grid and our critical energy infrastructure is the top priority for America’s electric companies,” said Scott Aaronson, EEI senior vice president for security and preparedness, in a statement.

“Given the attack on Ukraine and the capabilities of the countries involved, EEI and our member companies are closely monitoring the situation and are coordinating across the industry and with our government partners through the CEO-led Electricity Subsector Coordinating Council (ESCC) to ensure vigilance and the ability to respond quickly if needed.”