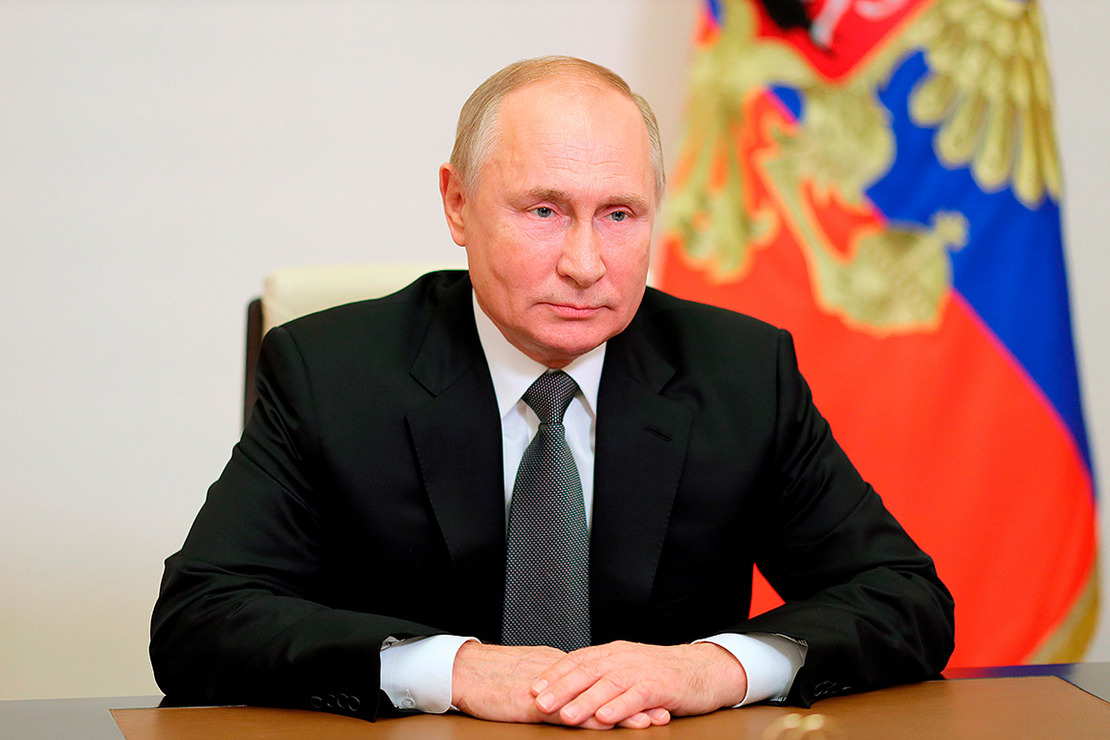 Western leaders looking to respond to Russia’s invasion of Ukraine might learn something from Moscow’s history of climate negotiations.

For decades, Russia’s modus operandi in the United Nations climate process has been a single-minded pursuit of its own interests — whether that meant cooperating to gain access to foreign markets or acting as a spoiler in defense of its economic agenda.

“It’s always been a very transactional process for the Russians,” said Alden Meyer, a senior associate with E3G and a longtime attendee at global climate talks.

Moscow hasn’t been above a little bit of gamesmanship, either, he added.

“They’ve also had a history of coming in with some pretty strong positions in the negotiations late in the game and in some places being the ones that keep the negotiations going into the wee hours of the morning,” Meyer said.

One example came at the 2005 talks in Montreal, Canada, when the Russian delegation proposed a surprise overhaul to the way the Kyoto Protocol would treat emissions commitments as the conference was wrapping up.

That’s not to say Russia always acts alone. Sometimes Russia’s climate team has cooperated with other countries to play the role of spoiler.

Moscow worked with the Trump administration, Saudi Arabia and Kuwait during climate talks in Katowice, Poland, in 2018 to frustrate a popular initiative.

Almost 200 countries wanted to elevate the findings of a landmark report by U.N. scientists that highlighted the need to keep warming to 1.5 degrees Celsius (Climatewire, Dec. 10, 2018).

The report was of vital importance to small islands and other vulnerable countries whose future depends on minimizing global temperature rise. But it also implied the need for a quick shift away from the unabated use of fossil fuels — an objective that threatens the economic interests of producer nations in the Middle East, as well as the United States and Russia.

Their combined objection sank the proposal.

The situation in Ukraine is an example of how Russia doesn’t operate within international norms and rules when they don’t think it is in their interest to do so, Meyer said.

The difference with climate change is the motivating factors, he added.

While much of Russia’s negotiating position on the climate is driven by what’s good for its fossil fuel sector and other commercial and economic interests, the motivating factors with Ukraine are couched in ideology and security concerns.

Oldag Caspar, an expert in European low-carbon policy for Germanwatch, sees a common thread between the way Russia engages internationally on climate change and the interests it is pursuing with regards to Ukraine.

Both stem from a deeply held Russian belief that their country was written off by the United States and its allies after the Cold War ended.

“What unites Russians is that the world has not said ‘thank you’ for what we did in the ‘80s and ‘90s,” he said, referring to the dismantlement of the Soviet Union. “Quite the opposite, they have just used our weakness, which we definitely had by then, for keeping us out of the world order. And just further humiliating us, actually.”

When the Soviet Union collapsed, so did its heavy industries and massive agricultural output, resulting in overwhelming carbon reductions for the planet — albeit involuntarily.

“Russian leadership has continuously had one narrative, that actually Russia is the country that gave the biggest present to the world actually on climate,” Caspar said.

It’s a politically useful message for the Vladimir Putin regime — and even resonates with his opposition, he added.

Getting the best deal possible

While observers say Russia’s motivation in climate talks has been to position itself to negotiate the best deal possible rather than concern for the climate, it does have a history of ratifying climate treaties.

The United States never ratified the Kyoto Protocol and pulled out of the Paris Agreement briefly under former President Trump, but Russia was party to both — even if it took until 2019 to ratify the 2015 Paris compact.

“So they haven’t really taken a wrecking ball strategy to the international climate negotiations,” Meyer said. “But they clearly were using some of the North-South tensions and some of the other dynamics to get the best deal they could for themselves within that framework.”

Russia has, at times, also leveraged its willingness to cooperate on climate change to secure concessions from the West on other issues.

For example, Russian President Putin moved to ratify the Kyoto Protocol in 2004 soon after the European Union dropped its objections to Russian membership in the World Trade Organization.

By joining Kyoto, Russia satisfied a threshold requirement that allowed the climate treaty to take effect. The move is widely viewed as a quid pro quo for providing Russia access to the global trade body.

As a party to Kyoto, Russia accepted an emissions target that effectively allowed it to grow its greenhouse gases because of the post-Soviet emissions cliff. And membership in the deal held out the possibility that Russia could sell credits to countries looking to reduce their emissions by buying offsets.

More recently, Moscow’s position on climate has shifted as its major trading partners have laid down more ambitious targets.

The European Union and China, which import gas, oil, minerals and other carbon-heavy commodities from Russia, plan to achieve carbon neutrality in the coming decades.

The European Union is also working to push through a carbon border adjustment that would tax imports of carbon-heavy goods — such as steel, cement and fertilizer — from countries that produce more emissions in making those products.

Observers say Russia is among the countries that would be most affected by that initiative, and it has criticized the proposal for contravening global trade rules (Climatewire, June 17, 2021).

Russia’s concern about the impacts of such a levy is acute.

Russia, the world’s fourth-largest emitter, moved to ratify the Paris deal after a trade group representing Russia’s industrial and fossil fuels companies wrote a letter to the Ministry of Natural Resources and Environment expressing concern that nonmembership might “serve as a pretext for imposing economic restrictions” on Russian exporters.

There’s an argument that when the European Union does things that affect the business of Russia, then Moscow snaps to attention, said Nikos Tsafos with the energy, security and climate change program at the Center for Strategic and International Studies.

“So if you’re going to go to a much more coercive climate environment, with carbon border adjustments, Russia will pay attention to that,” he added.

On its own path

Moscow has not updated its climate target — which aims to cut emissions by 30 percent by at least 2030 from 1990 levels.

The baseline date is before the collapse of the Soviet Union, and, like the Kyoto targets, its Paris commitment gives it room to grow. Russia’s emissions in 2012 were nearly 70 percent below the 1990 level.

The same industrial interests that pushed the Kremlin to join Paris successfully lobbied last year to gut a domestic climate law that would have introduced emissions caps and enforcement mechanisms.

Last October, Putin announced that Russia would zero out its emissions by 2060, but that pledge — as well as Russia’s hopes of selling lucrative carbon credits under the Paris program — both rest on the role its vast forests could play in sequestering carbon. It has not articulated a plan to ramp down its fossil fuels production.

When carbon sinks are factored in, Russia claims it will reduce emissions by 70 percent compared with the 1990 baseline by 2030.

Still, Putin’s tone is markedly different from the days when he famously suggested that climate change was the result of natural forces — or perhaps interplanetary cycles — and would save Russians money on fur coats.

In pre-recorded remarks to last year’s climate conference in Glasgow, Scotland, Putin said that Russia was “taking the most serious and vigorous measures” to combat warming by protecting its forested land.

But, as in the past, Russia’s participation in Glasgow was a reflection of the areas where it stood to benefit.

As the world’s second-largest emitter of methane after China — owing in part to aging gas pipelines — Russia abstained from a global pledge to reduce emissions of that potent greenhouse gas and another to phase out coal use.

It did, however, join a pact to eliminate deforestation by 2030, since trees and their offset potential could offer huge returns to Russia.

At the close of climate talks, Russian climate envoy Ruslan Edelgeriev described an agreement on rules for how countries trade carbon offsets as the “main achievement” of the conference.

Russia’s position at the summit signals that it’s taking climate-related issues seriously, Dmitri Trenin, director of the Carnegie Moscow Center, argued in an essay just after the close of talks in Glasgow. But even though Russia has been late to embrace climate change, it won’t simply follow the West’s lead.

“Rather, it will act in accordance with its national interests, carefully balancing climate-related measures against economic growth, and traditional energy sources against renewables, while building situational alliances with other countries,” he wrote.