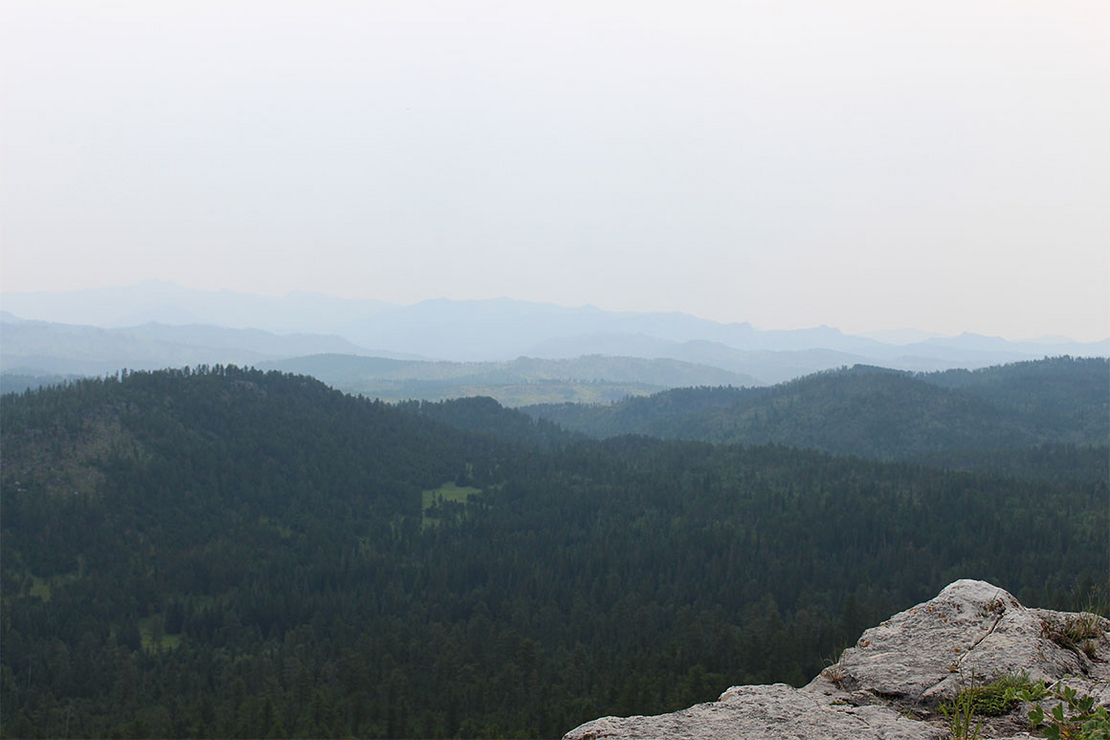 CUSTER, S.D. — Thunderhead clouds that darken the skies above the Black Hills National Forest on summer afternoons can be a blessing or a curse. They bring rain to fend off wildfires — but also lightning to start them.

The Black Hills, on the western edge of South Dakota and the eastern edge of Wyoming, are what Jim Furnish, a retired Forest Service deputy chief, calls a “lightning forest.” Exposed ridges invite strikes that can spark wildfires when the weather turns hot and dry.

So far, this year has been relatively tame. South Dakota doesn’t have any significant wildfires. But smoke from headline-grabbing wildfires to the west has whitened the skies here with haze, and people say the Black Hills’ turn may come later this summer. Sixty wildfires are burning in Montana, Idaho, California, Oregon and Washington, and the National Interagency Fire Center predicts above-normal wildfire risk in western South Dakota for the rest of the summer.

“If the rain spigots turn off, look out for August and September,” said Blaine Cook, a retired silviculturist — a specialist in the care of forest trees — on the 1.2-million-acre Black Hills forest. “That’s when we get our giants.”

The Black Hills have a history of wildfire, a natural occurrence that grows out of hand in the right conditions. One of the worst was the Jasper Fire in August 2000, started with a discarded cigarette, which burned 83,508 acres, including 90% of the area of the Jewel Cave National Monument. On just the first day, the high-intensity fire advanced at a rate of about seven football fields per minute, according to the National Park Service. Sections of the forest have barely begun to again grow trees.

“It was an atomic bomb,” Cook told E&E News on a visit to the forest last week.

In addition to the threat wildfires pose to homes in the small towns scattered around the national forest, the blazes deal a blow to a timber industry that’s already struggling with mill closures, including one in nearby Hill City earlier this year. They’re damaging, too, to the region’s main economic engine: tourism, driven in large part by the Mount Rushmore National Monument within the forest, averaging more than 2 million visitors a year.

“The risk of wildfire in the Black Hills National Forest and surrounding areas is real,” researchers at Black Hills State University said in a climate resilience plan drafted in 2019 with the city of Spearfish, just north of the national forest. “Not only is there potential for loss of trees, but subsequent effects on biodiversity, tourism, and ecosystem health.”

The report added, “Of course, wildfire is a natural occurrence that can be healthy for forests, but a destructive fire could have far-reaching effects on ecosystems that could take years to recover.”

Even when fire doesn’t threaten cities like Spearfish, the report said, smoke from faraway fires can mean poor air quality there.

To timber companies, the slow pace of forest thinning and related projects has added to the worries by giving wildfires more potential fuel.

“When you live and work in or near forested landscapes in the West, the threat of wildfire is always on your mind. But some fire seasons, such as this year, only heighten our levels of concern,” said Ben Wudtke, executive director of the Intermountain Forest Association, representing timber interests.

“Last year, we witnessed hundreds of thousands of acres burning, often at high severity, across Colorado and Wyoming national forests, and this year, we are unusually hot and dry across much of the region and country alike,” Wudtke said.

Wudtke, who also leads the Black Hills Forest Resource Association, said increased wildfires in the West also reflect a lost opportunity to sequester carbon, which the forest products industry says can coexist with periodic timber harvesting. But that, too, is another point of debate with environmental groups.

If large-scale fire hits the Black Hills again this year, it could intensify a debate about sustainable timber production, since proponents of shrinking the harvest targets say a combination of wildfire, aggressive logging and damage from a 20-year bark beetle infestation already warrant a sharp reduction (Greenwire, May 11, 2020).

On a recent afternoon in the forest, Mary Zimmerman, vice president of the Norbeck Society, an environmental group based in Rapid City, noted thunder in the distance. Otherwise, the afternoon was breezy and dry and in the mid-80s, with the aroma of dried pine needles in the air.

If the gathering storm blew over with lightning, she said, the Forest Service would likely send a plane overhead the next day, looking for any ignitions.

“It’s a concern,” Zimmerman said. “I live in the forest. I’ve evacuated from forests.”

The climate is sending South Dakota seemingly conflicting signals. Fire-busting downpours may increase and become heavier, but droughts will become frequent and the weather will be hotter, warming by anywhere from 2 to 16 degrees Fahrenheit annually by 2100, according to the university’s resilience report. Extreme precipitation events will increase by 15%, and winters will trend milder, giving insects like bark beetles a more supportive environment.

Overall, researchers say, the Black Hills are on notice for bigger fire risks in the decades ahead. But worries about wildfire go in cycles, Forest Service retirees said, easing when the region has been relatively free of fire for a few years.

Furnish, who has become more skeptical of Forest Service forest management policies in recent years, looks with alarm at the conditions in the Pacific Northwest, which hold lessons for the changing climate’s impact throughout the nation’s western half. About 90% of the West was in drought as of July 1, according to the U.S. Drought Monitor, and more than half of that area in extreme to exceptional drought.

The conditions boggle the mind, Furnish said. “The idea of Seattle being 120 degrees? I just don’t have room for that in my brain.”