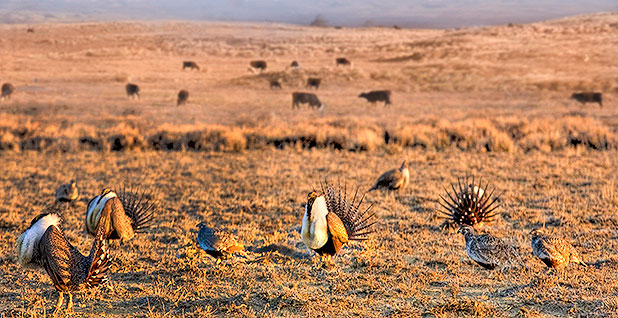 Court rulings on the Bureau of Land Management's comment procedures and climate analysis have dramatically changed the landscape of the December oil and gas lease sales. Department of Agriculture/Flickr

Over the next week and a half, the federal government will make its quarterly offering of public lands for sale to oil and gas developers.

Absent from the auction block: more than 1 million acres that the Bureau of Land Management pulled from its December sales after a federal judge temporarily blocked the agency from streamlining the leasing process in sage grouse areas (Greenwire, Oct. 24). A trio of cases requiring BLM to take a closer look at downstream climate impacts could also affect the agency’s long-term approach to leasing public lands for oil and gas development.

The Sept. 21 preliminary injunction issued by Chief Magistrate Judge Ronald Bush in the U.S. District Court for the District of Idaho was a significant — if temporary and partial — win for groups that have fought efforts by Interior Secretary Ryan Zinke and Deputy Secretary David Bernhardt to achieve "energy dominance" on federal and tribal lands. But the battle is far from over, said Michael Saul, a senior attorney at the Center for Biological Diversity, one of the plaintiffs in the case.

"We’re relieved that the Idaho injunction has at least opened up the process a little bit more and given the public at least a 30-day window to try to weigh in on these massive decisions about their future, but it’s not the end of the road for this case," he said. "That’s just a temporary procedural reprieve. Zinke and Bernhardt’s Interior is still moving ahead."

Bush, an Obama appointee, will soon rule on the legality of the Trump administration’s full slate of leasing reforms, established in a Jan. 31 instruction memorandum to BLM staff. While the injunction — which requires BLM to allow 30 days for comment and protest on lease sales — applies only to tracts that intersect with sage grouse planning or habitat management areas, a final ruling could require much broader and more substantive changes (Energywire, Sept. 24).

In the meantime, many BLM state offices have indicated they will offer much of the land pulled from this round of lease sales in their spring auctions. At least one state — Wyoming — is already planning a supplemental sale in February to put the sage grouse tracts on offer after it fulfills the comment and protest period requirements.

"The impact of Judge Bush’s ruling is that BLM needs to do more public comment before putting out leases in sage grouse habitat up for sale. They should be able to do that additional public comment and get those leases out for the first-quarter sales in 2019," said Kathleen Sgamma, president of the Western Energy Alliance, a trade association and an intervenor in the case. "I’m sure they’ll be able to do that. It’s not that much more comment period than they’ve already given, so we hope to see those leases come back up soon."

Nada Culver, senior counsel and director of the Wilderness Society’s BLM Action Center, said she would have liked to see a more detailed explanation from the bureau as to which acres the states were withdrawing — and why.

Some state offices noted on their websites that they were deferring parcels in order to comply with Bush’s injunction. Some just said they were taking tracts out of the December sale without saying why. Colorado initially attributed its deferral of nearly 150,000 acres to a request from the governor to hold off on leasing in sage grouse habitat until BLM updates its plans for those areas.

For now, the litigation doesn’t appear to have any implications for states like New Mexico, which is outside sage grouse country, Culver said (see map).

"We appreciate this opportunity and will be participating in the process, but we don’t know that it is official, universal or will continue to happen," she said.

"The hope is that the agency’s decisionmaking will become aligned with that science and the understanding that we have a very limited number of emissions left if we want to stay within certain warming thresholds," Tisdel said.

U.S. District Court for the District of Colorado Senior Judge Lewis Babcock, a Reagan appointee, found in October that BLM had partially mishandled its climate analysis for oil and gas development in the Colorado River Valley (Energywire, Oct. 18).

BLM Colorado’s website previously noted that the agency is assessing the ruling’s possible impact on the December lease sale, but a spokesman for the office said last week that there are no further updates on that review.

The implications of those cases depend on the interpretation of the National Environmental Policy Act, said BakerHostetler attorney Mark Barron. If NEPA is read as strictly procedural, the climate assessment needs to be complete, but the agency does not necessarily have to choose the alternative with the least impact, he said. If identifying greenhouse gas emissions instead requires the agency to avoid said emissions, he said, the rulings pack a more substantial punch.

"Either way, it will add time and cost to environmental review," Barron said. "That’s the minimum impact it would have."

If recent court decisions persuade BLM to cancel lease sales or withhold parcels for which environmental review is complete, he added, industry interests could revive a now-dormant lawsuit that prodded the Obama administration to hold quarterly lease sales (Energywire, Aug. 12, 2016).

"If there are any parcels for which environmental review is complete, then BLM has a nondiscretionary duty to offer those parcels," Barron said.

Sgamma of the Western Energy Alliance said she regrets not intervening in the Colorado lawsuit. The industry group could have made the case that the Federal Land Policy and Management Act does not require BLM to analyze alternatives to leasing and development. Those uses fall under FLPMA’s "multiple use" mandate, she said.

Nevertheless, Sgamma said, she anticipates a quick resolution in the Colorado case. In his ruling, Babcock asked the parties on both sides to confer on a remedy.

"BLM should be able to do that corrective NEPA and get on it with it," Sgamma said.

Culver of the Wilderness Society questioned whether the solution is that cut-and-dried.

"BLM’s defense has been that it’s hard for them to do that analysis," she said. "That argument is harder and harder to make with a straight face as more and more information becomes available.

"What the courts are saying is, whether BLM wants to or not, it’s time to address it," Culver continued. "Scientists are saying that, too."