Sage grouse struggle as BLM and states search for answers 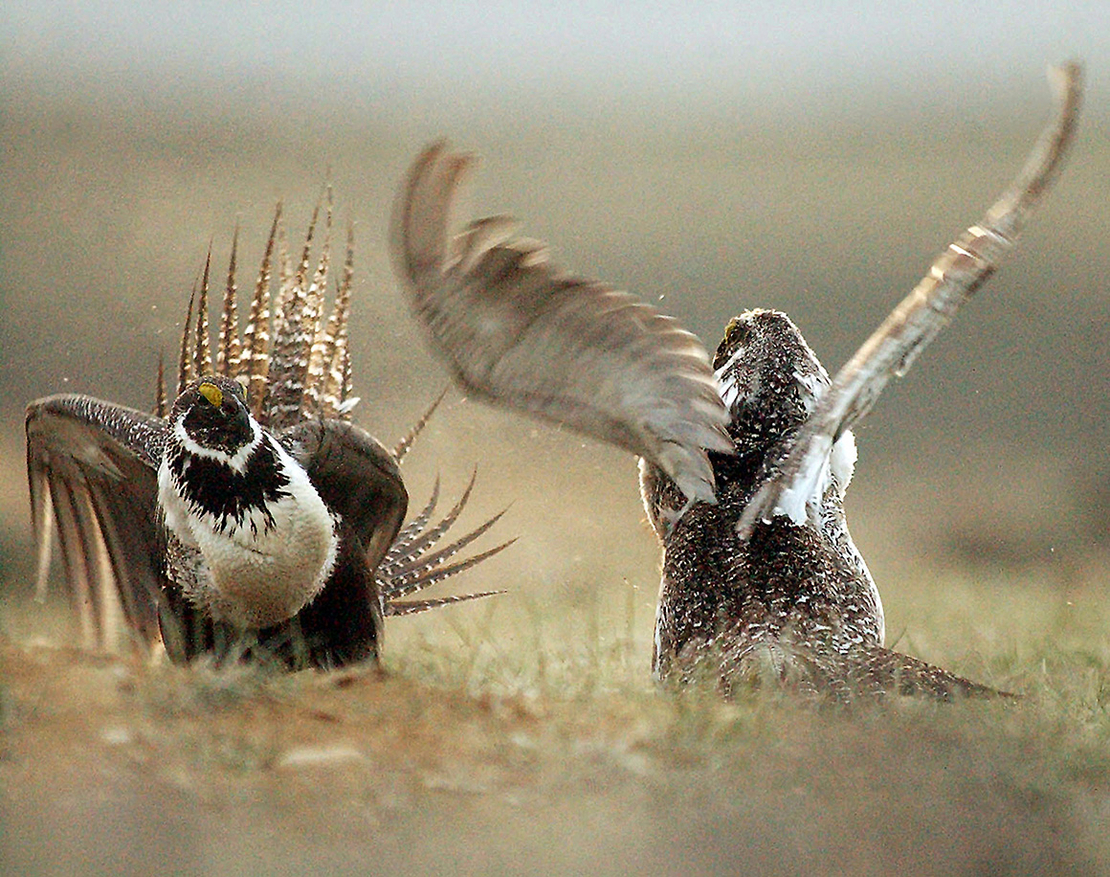 Male sage grouse fighting for the attention of a female, southwest of Rawlins, Wyo., in 2008. Jerret Raffety/Rawlins Daily Times/AP Photo

The imperiled greater sage grouse, an iconic Western bird that federal and state regulators have been trying to protect for decades, may be running out of time.

Sage grouse populations are dropping across much of the bird’s 11-state Western range, the result mostly of lost habitat due to a combination of severe drought, catastrophic wildfires and the spread of invasive plant species like cheatgrass that can overwhelm the sagebrush ecosystem the bird depends upon for survival.

Things are particularly bad for the sage grouse in parts of California, Colorado, Nevada, Oregon and Utah, where populations have dropped — in some cases, dramatically — in the last six years, according to federal and state monitoring data.

That has once again raised concerns among wildlife biologists and land management agencies that the Fish and Wildlife Service’s 2015 decision that Endangered Species Act protections for sage grouse were “not warranted” could soon be reversed. State and federal agencies are focused on this possibility, scrambling to develop and implement strategies to preserve the sagebrush habitat and, hopefully, save the bird.

“The trends are going in the wrong direction for us to say we can somehow scientifically and legitimately support that ‘not warranted’ decision,” said Ed Arnett, a wildlife biologist and CEO of the Wildlife Society, a group of more than 11,000 wildlife professionals.

There’s currently only about 26 million acres of core sagebrush habitat left where the native sagebrush is healthy and sage grouse are thriving. But that core habitat is disappearing at a rate of about 1.3 million acres a year, said San Stiver, sagebrush conservation initiative coordinator for the Western Association of Fish and Wildlife Agencies.

If core habitat continues to decline at that annual rate, it will be cut down in half, to about 13 million acres, in the next 10 years, producing a dire situation where “it’s getting darn close to over” for the ecosystem, Stiver said.

“The door is slamming shut for the grouse,” Stiver said.

The gloomy outlook comes as the Bureau of Land Management — which oversees 68 million acres of the bird’s habitat, the most of any federal agency — is working to update the sage grouse management blueprint adopted in 2015 in an effort to address the worsening situation (Greenwire, Nov. 19, 2021).

Those 2015 plans, approved after years of work, amended 98 BLM and Forest Service land use plans to incorporate grouse protection measures. The plans were never fully implemented before the Trump administration amended them in 2019 to allow for more human-made activities in grouse habitat. A federal judge that year blocked BLM from implementing those changes.

In addition to updating the plans, BLM also last year started a separate analysis evaluating whether to restore a key piece of the Obama-era blueprint that designated 10 million acres of “sagebrush focal areas” deemed critical to the bird’s survival, with stricter limitations on human-made activities. The Trump administration revisions dropped most of the sagebrush focal areas (Greenwire, Aug. 11, 2021).

BLM Director Tracy Stone-Manning indicated during a March speech to the Public Lands Council, a ranching industry trade group, that the bureau’s revised approach to sage grouse habitat management could mean adjusting livestock grazing practices to protect the best rangelands, like those that contain wet meadows that are critical to hens and nesting chicks.

One of her top priorities for BLM is to adopt practices that make the landscapes more “resilient” to the impacts of climate change, such as drought. But she also assured them that would be done in consultation with all stakeholders, with the top goal to avoid the need to list the sage grouse for ESA protection.

“Let me say it out loud over again: The last thing we want is to list the greater sage grouse, which is why we are all working so hard,” Stone-Manning said.

A growing number of sage grouse experts aren’t sure they still can prevent ESA protections for the bird.

“Long-term trends are down; there’s absolutely no doubt about it,” said Jack Connelly, the retired principal wildlife research biologist at the Idaho Department of Fish and Game who is considered by many to be one of the leading sage grouse experts.

“What I’d like to hear from these agencies is what are they going to do about it?” Connelly said. “What kinds of plans will you implement that will have an effect?”

Connelly said his doubts are rooted in the fact “there is no track record of success within the BLM, or any state and federal agency at this point, in terms of sage grouse management.”

It’s up to the various state wildlife agencies to properly manage the welfare of the sage grouse, and BLM and other federal agencies to protect the bird’s habitat, “and they both are failing,” he said.

There was a time, more than 200 years ago, when the greater sage grouse — first described by Meriwether Lewis and William Clark during their 1804 expedition — thrived, with a population estimated at more than a million birds.

Federal and state wildlife biologists are currently conducting the laborious task of counting male grouse at sage grouse breeding grounds, called leks, across the West and analyzing the data collected.

There likely won’t be any hard data on male lek attendance this spring “for several months, at the earliest,” said Daly Edmunds, policy and outreach director for Audubon Rockies in Fort Collins, Colo.

Counting male attendance at active leks is an accurate barometer of grouse populations because the males eschew taking cover from predators as they perform an elaborate mating dance this time each year. That makes them easier to count.

The early reports from the field are not encouraging.

“It’s looking pretty ugly out there so far this spring from what I hear,” said the Wildlife Society’s Arnett.

“I really don’t expect numbers to skyrocket this year; I expect the same story, the same report that they’re declining,” Connelly added.

Bob Budd, who chairs Wyoming Republican Gov. Mark Gordon’s sage grouse implementation team that helps guide the state’s management of the bird, acknowledged they are finding some problem areas where male lek counts are down.

“There’s no good news,” Budd said, “but until we really see what the numbers are this spring, it’s totally speculative.”

Most sage grouse experts and land managers have their eyes on Wyoming, which is home to more than a third of the remaining sage grouse population in North America — the most of any state.

The sage grouse numbers have been on the decline in the Cowboy State since 2016. Male lek attendance declined 13 percent in 2021, compared with the previous year, according to a Wyoming Game & Fish Department analysis released last September.

A similar trend is emerging in other parts of the West.

The state of Nevada, as part of its Sagebrush Ecosystem Program, released a report in December that showed the average male attendance rate at the breeding grounds they surveyed was only 11.2 per lek in 2021 — 41 percent below the 20-year average of 19.1 males per lek between 2000-2020.

What’s more, the Nevada Department of Wildlife reported that in “trend leks” — breeding grounds biologists surveyed multiple times in the spring, instead of once annually, to better gauge population trends — the average male attendance rates were less than 10 males per lek.

It blamed “habitat loss from wildfire and invasive species and habitat fragmentation” as “the greatest contributing factors to declining populations.”

In Utah, the state’s Division of Wildlife Resources determined that the average rate of males per lek last year was only 11.6, which ranked among the lowest in nearly 20 years, according to its annual population count report released in October.

In Oregon, male lek attendance increased slightly in 2021, as it did in 2020, the state Department of Fish & Wildlife concluded in a September report. But those gains were very modest after a disastrous 2019 in which the statewide male lek attendance rate “was the lowest recorded in the state’s history.”

The “lack of a sharp rebound following the 2019 historic low population estimate warrants serious concern for the sage grouse population in Oregon,” the report concluded.

Searching for ‘light at the end of the tunnel’

The first study found that millions of acres of priority sage grouse habitat have been destroyed in the last two decades, in large part due to wildfires (E&E News PM, March 17, 2021).

The second found that nearly 40 percent of sage grouse populations across its range have declined, in some cases dramatically, since 2002 (E&E News PM, March 30, 2021).

The report, which focused on priority sage grouse habitat in the Rocky Mountain and Great Basin regions, estimated that about 1.9 million acres of sagebrush, or 3 percent of the sagebrush in both regions, was lost between 2012 and 2018. Most of the lost habitat — 1.1 million acres — was on land managed by BLM.

“Wildfire accounted for approximately 72 percent of the sagebrush loss in both regions,” but it was responsible for 87 percent of the lost habitat in the Great Basin region, the report said.

BLM says that the data in its monitoring report, coupled with the findings in the two USGS-led studies, “emphasize the urgent need to expand ongoing efforts to conserve currently functional habitat and restore currently degraded habitat.”

Stiver and his colleagues at the Western Associations of Fish and Wildlife Agencies are working on a possible plan to save the last of the sagebrush habitat.

They are coordinating with FWS, BLM, the Nature Conservancy and others to map out the core area boundaries, as well as the sagebrush that has been damaged but could recover with restoration work.

The goal of the “landscape conservation design model,” Stiver said, is to develop strategies to protect the mapped-out core areas by limiting human-made activities and actively removing invasive plant species. It’s also designed to direct restoration funding to the parcels that can be restored and not waste resources on habitat that have been burned and is “beyond hope,” he said.

“We’ve got to protect all our good habitat, and we have to put a great deal of effort into making sure those areas stay good,” Stiver said.

Too often, Stiver and others say, federal and state money and resources have been wasted trying to restore scorched landscapes and grouse habitat in areas that are so heavily developed there’s much less likelihood of the sage grouse ever returning.

“There really is a light at the end of the tunnel if we can move 1 million acres a year into the core, and not lose anymore,” he said.

If that is done, the sage grouse have a good chance not only to survive, but also to thrive, he said.

“We know we can do this; all is not lost,” he added. “But we need to go in that direction. And fast.”