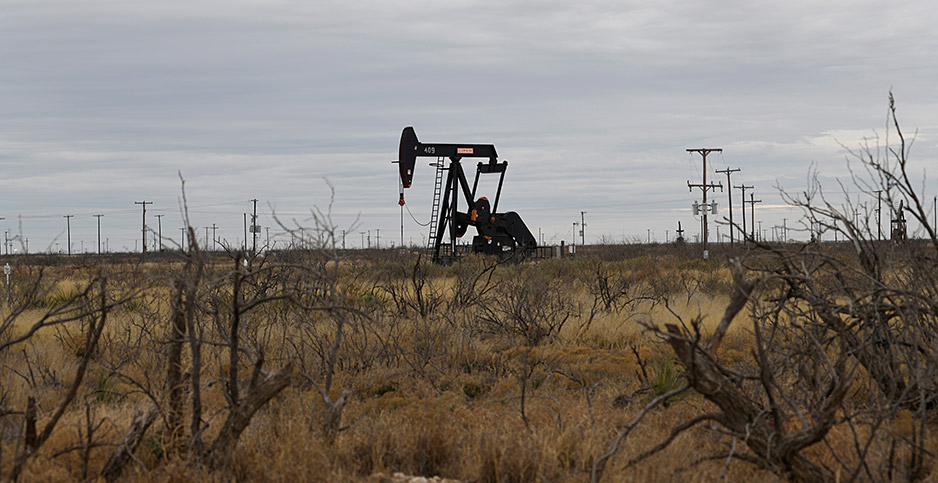 A pumpjack in the Permian Basin. Royal Dutch Shell PLC announced last week that it would stop operating in the basin. Nick Oxford/Reuters/Newscom

If a major oil company left the Permian Basin, would shale drillers notice?

Royal Dutch Shell PLC is reportedly mulling the sale of its assets in the Permian, America’s largest shale basin. Whether the Anglo-Dutch giant pulls the trigger on a deal figures to be a test case for how to green an oil company — and of shale’s resilience in a world increasingly focused on reducing emissions.

Few oil companies have announced more ambitious plans to remake their business than Shell, which is targeting net-zero emissions by 2050. Shell plans to reduce oil production 1% to 2% annually over the next decade and divert money from drilling to renewable energy, electric vehicle charging and low-carbon fuels like hydrogen. A Dutch court recently ruled the company needs to quicken the pace of its emissions cutting by 2030.

Yet oil remains a part of Shell’s business for now. The company is relying on profits generated by its best oil fields to finance its green makeover. When it unveiled its drilling strategy last month, that included the Permian Basin. Shell reports production in the Permian of 193,000 barrels a day, or about 8% of the company’s total output.

Part of the Permian’s resilience owes to just how cheap it is to drill there. Shell reckons it can break even on a Permian well with oil prices around $30. West Texas Intermediate, the benchmark for U.S. crude, recently eclipsed $70 a barrel.

The low production cost and strong oil price help explain Shell’s interest in potentially selling out of the Permian, and why it figures to have plenty of suitors for its assets. Reuters, the first to report Shell was mulling a Permian sale, said ConocoPhillips, Devon Energy, Chevron Corp. and EOG Resources have all emerged as potential buyers.

"In this hot US [mergers and acquisitions] market, it would not be surprising for international companies to explore cashing out of US shale acreage," wrote Parker Fawcett, an analyst who tracks the industry at S&P Global Platts, in an email.

He said a Shell sale would have a negligible impact on Permian production because another company would likely pick up drilling where the Anglo-Dutch giant left off.

Whether a sale would reduce greenhouse gas emissions is a separate question. There is some reason to think the impact would be negligible or even lead to an emissions increase. Shell is currently running three drilling rigs in the Delaware Basin, the western stretch of the Permian, and it wasn’t a prolific producer there to begin with.

Consider these drilling metrics. To compare companies’ performance, analysts often look at the month when a well hits peak production, measuring the number of barrels by the well’s length.

Both figures saw Shell ranked in the bottom half of Delaware producers. EOG Resources, by contrast, was the top producer in the basin, with output of 236 barrels and 242 barrels per 1,000 feet in 2020 and 2019, respectively.

There’s also this: Shell is green by oil industry standards. It has moved to eliminate routine flaring in recent years, and it is exercising discipline about whether to sanction new drilling projects. Where Shell invested $10 billion to $12 billion on drilling between 2017 and 2019, it is now planning to earmark $7 billion to $9 billion for oil development.

Majors have been quick to offload high-emission and high-capital intensity projects in recent years, said Artem Abramov, an analyst who tracks the oil industry at Rystad Energy, a research firm.

"It does not help to achieve climate goals faster from the general industry perspective," Abramov said. "One might even argue that it slows down the process, as new owners might feel less pressure from their investor base to implement structural improvements than supermajors."

Shale has a complicated emissions legacy. The oil produced in basins like the Permian and the Bakken of North Dakota also tends to produce a lot of natural gas. That gas has helped displace coal in the electricity sector, helping reduce emissions.

While gas produces less carbon dioxide than coal when burned, releasing methane from oil wells directly into the atmosphere is many times more potent at trapping heat. Even more important from an emissions perspective has been shale’s influence on global oil consumption.

When drillers learned how to squeeze oil from previously inaccessible rock last decade, they unleashed a torrent of new production. That sent the price of oil plummeting and helped spur new consumption.

Oil demand is surging after plummeting last year. The International Energy Agency reckons global demand will return to pre-pandemic levels by the end of 2022. The rebound in demand has sent oil prices soaring, but drillers so far have resisted rushing back into the field (Climatewire, June 4).

Many analysts think restraint won’t last long in the face of robust prices. If demand remains strong, they said, production from shale basins like the Permian likely will continue.

"The world is starting to change with the Shells, the BPs and Oxys [Occidental Petroleums] of the world," said Daniel Raimi, an RFF researcher who authored the 2019 Resources for the Future report.

BP PLC and Occidental Petroleum have, like Shell, outlined plans to green their business. "But the changes we’re seeing in the real world pale in comparison to the change we need to achieve our real term climate goals," Raimi said.