Sally Jewell on new job: ‘I actually threw my hat in the ring’ 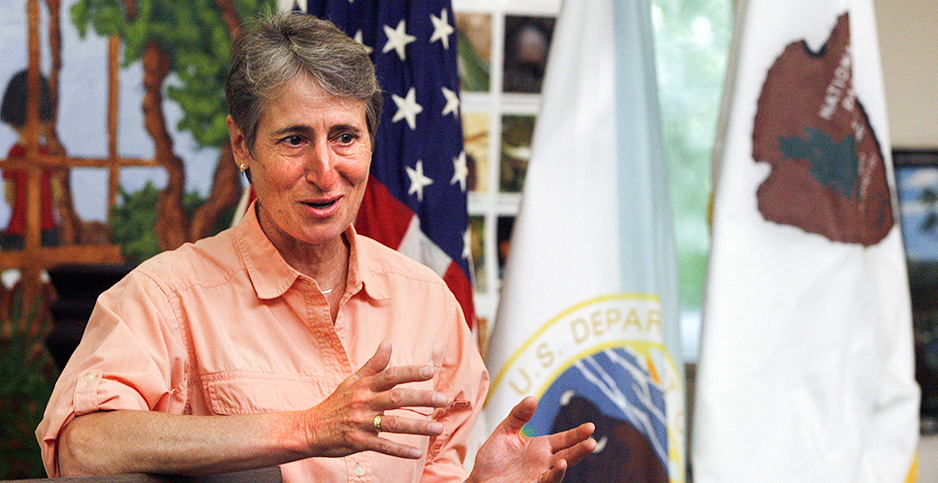 As a crisis unfolded at the Nature Conservancy after a sexual harassment and misconduct investigation, former Interior Secretary Sally Jewell stepped forward.

"I actually threw my hat in the ring," she told E&E News yesterday.

In September, Jewell will become the interim CEO of the global advocacy group. She is replacing Mark Tercek, who is stepping down after an internal probe revealed culture problems and raised questions about the group’s handling of harassment allegations.

"The Nature Conservancy has obviously been struggling of late with its culture," Jewell said. "From my perspective, what was clear is this is an organization that deserves to survive long-term."

An internal investigation last month by the law firm McDermott Will & Emery concluded that two executives — vice presidents Kacky Andrews and Mark Burget — did not properly disclose their romantic relationship. It also found that the group’s former president, Brian McPeek, inappropriately kissed a staffer in 2010. All three have left TNC.

More broadly, the probe found there was a "reluctance" at TNC to investigate anonymous harassment allegations and that its policies were outdated in the #MeToo era (E&E News PM, May 30).

Jewell said she thought she was well-suited for the difficult job ahead, drawing on her time both in the private sector as CEO of REI and in the public sector.

"I felt like I was in a unique position," she said.

In particular, she noted that she made addressing a culture of sexual harassment and assault at the Interior Department a priority during her tenure there from 2013 to 2017.

She was referring to what began as a sexual harassment scandal at the Grand Canyon.

"It was the tip of the iceberg," Jewell said, noting that it revealed a culture that "needed to be addressed."

Indeed, a 2017 survey commissioned while Jewell was at Interior found shocking results. More than a third of the departmentwide 28,203 respondents — 35% — reported being the victim of some form of harassment in the previous 12 months. Gender-based harassment was the second-most common form reported by those who participated in the survey (Greenwire, Dec. 15, 2017).

Jewell said the process of addressing harassment issues is "very difficult" but that it is critically important.

TNC’s board chairman, Tom Tierney, referenced that point yesterday during a volunteer summit in Washington, D.C., calling the recent turmoil a "crisis."

"The last 12 weeks have been an incredibly emotional and trying time," he said in remarks that at times brought him to tears. "A profoundly sad time. Just sad."

He added that TNC hopes to move ahead by updating sexual harassment policies, improving transparency and enhancing management policies.

Jewell said she has been familiar with the Nature Conservancy for years, dating back to her time as CEO of REI and other conservation work in Seattle.

But she is still somewhat new to the group, having joined the board only last year.

She also insisted that while she will serve as interim CEO during the search for a new CEO — a process that will likely take many months — she has no interest in the permanent job.

In the near term, Jewell said she and TNC will implement policies that will bring stability to the nonprofit.

"We really are all committed to providing the kind of organization … where employees can bring their whole selves to work," she said.