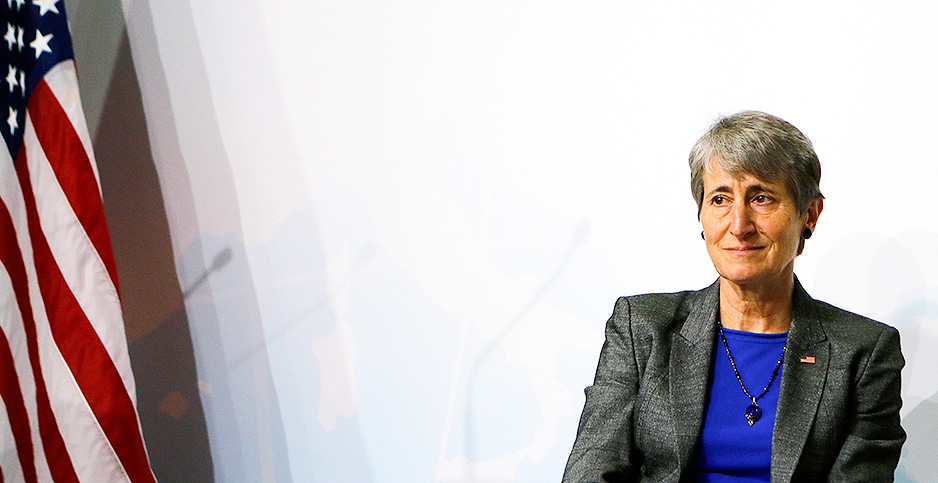 Former Interior Secretary Sally Jewell will take over as interim CEO of the Nature Conservancy, the nonprofit rocked by harassment and misconduct scandals said today.

Jewell, who is currently a board member for the group, will take the reins in September, but she will also serve on a committee overseeing the global organization until then.

The former CEO of REI is replacing Mark Tercek, who announced Friday he is stepping down (Greenwire, June 10).

"Since its inception 68 years ago, TNC has been a leading organization centered around its mission of conserving the lands and waters on which all life depends," Jewell said in a statement. "I am humbled and pleased to step forward to support this important organization through its transition."

Jewell’s ascension to interim CEO is one of several leadership changes at the Arlington, Va.-based group.

TNC also said Frances Ulmer will become board chair in November. Ulmer is the chair of the U.S. Arctic Research Commission, appointed by President Obama. She also served on the national commission on offshore drilling following the 2010 Deepwater Horizon oil spill.

The leadership announcements come after a series of departures by executives at the group stemming from a sexual harassment and misconduct investigation.

Last month, an independent probe concluded that two executives — Mark Burget and Kacky Andrews — did not follow protocols in disclosing their romantic relationship.

The report from the law firm McDermott Will & Emery also concluded there was evidence that former TNC President Brian McPeek inappropriately kissed another staffer in 2010. It cleared McPeek of other accusations, including that he had promoted a woman with whom he was in a romantic relationship.

It also criticized TNC’s management of sexual harassment allegations, saying its policies were lacking in the #MeToo era. It found that there "has been reluctance to investigate anonymous reports" and that it "needs to revamp its training materials and methods" with regard to harassment (E&E News PM, May 30).

TNC’s handling of the investigation has been criticized.

Tercek initially said that McPeek, who took on a reduced role at TNC while the probe was conducted, would return to his position. Tercek backtracked days later, saying McPeek would resign.

Days after that, Tercek announced Friday that he, too, would be stepping down.

Burget and Andrews, the two executives who were in a romantic relationship, have sharply criticized the investigation.

Lawyers for the two, Paul Kiyonaga and Avi Kumin, said the report was "flatly wrong."

The problems appear to have spread beyond the group’s Arlington headquarters. The executive director of its Caribbean program based in Florida, Luis Solórzano, has left, a spokesperson for the group confirmed. His departure follows allegations of sexism and harassment, Politico reported yesterday.

Jewell, who served as Obama’s Interior secretary from 2013 to 2017, referred to the scandals in her statement.

"Our strength has always been in our people," she said, "and we recognize this comes with great responsibility to provide this team a supportive, open and inclusive work environment so everyone can thrive."

"These are all important appointments," he said, "that will ensure our entire organization has the support it needs while we conduct a CEO search, continue our work to create a more open and equitable culture, and advance our mission."