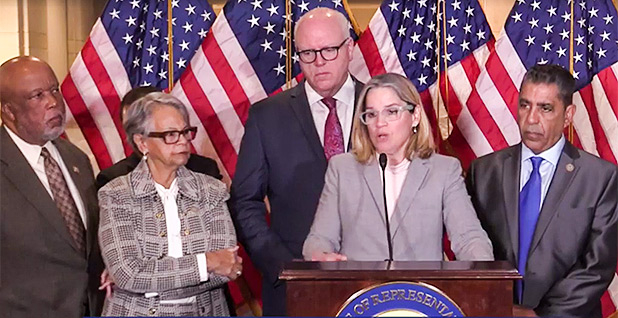 "The situation is still a life-or-death situation," Cruz said, blasting the Trump administration for what she called an "inadequate" and "insufficient" response to Hurricane Maria, the storm that destroyed the island’s antiquated electricity grid and has left people without power and safe drinking water for the past six weeks.

"While the American people have had a big heart [responding to the disaster], President Trump has had a big mouth," Cruz said. "He has used it to insult the people of Puerto Rico."

The mayor spoke at a Capitol Hill press conference yesterday morning alongside several House Democrats, including Rep. Joe Crowley of New York, chairman of the Democratic Caucus, and Rep. Bennie Thompson of Mississippi, ranking member of the Homeland Security Committee.

Cruz was in town to testify at a Homeland Security panel hearing today that was canceled at the last minute.

Meanwhile, House Minority Whip Steny Hoyer of Maryland and a slew of other House Democrats yesterday announced an event at the Capitol this afternoon "to stand in solidarity" with the Puerto Rico and U.S. Virgin Islands victims of the hurricanes.

Cruz yesterday said the Jones Act should be waived for "at least the next four years when it comes to humanitarian ships that come into Puerto Rico" and criticized the Stafford Act’s rebuilding restrictions.

The administration in late September temporarily waived the Jones Act, a shipping law that requires the movement of goods between U.S. ports, including Puerto Rico, to be carried out by American-built and -operated vessels.

The Stafford Act currently limits how the Federal Emergency Management Agency rebuilds after a disaster. FEMA can only rebuild what was in place originally, but lawmakers in both parties have said they want improvements.

"We need a comprehensive plan for Puerto Rico that touches on energy, education and health care, but it cannot be a plan that takes us back to the 1950s and that says that things ought to be rebuilt up to those standards," the mayor said. "We need to reform and reshape our society."

Cruz said that "diversification of energy is most important and most needed" in the long term, especially solar power. "Microgrids especially for communities, so they can, so to speak, unplug themselves from the main grid and be able to be energy sustainable."

Still, the No. 1 priority is "of course to get power back," the mayor said. Roughly 70 percent of the island is still in the dark. "There are basic needs that need to be met," said Cruz.

Crowley agreed, saying that right now people in Puerto Rico want the power back on and normalcy to return as quickly as possible, adding that long-term fixes are important, but to the average person requiring immediate aid, it’s an esoteric debate for Congress. Still, Congress should focus on both goals, he said.

"I think what we need to be doing simultaneously [is] walking and chewing gum at the same time, looking at the issue of resiliency," said the New York Democrat.

Cruz also blasted the island’s fiscal arrangement with the U.S. government to repay its debt under the 2016 Puerto Rico Oversight, Management, and Economic Stability Act.

"PROMESA is killing the people of Puerto Rico because it’s taking the money [from municipalities] to pay the debt," she said.

An eye on rebuilding

Many lawmakers likely would disagree with Cruz’s assessment of the Jones Act and PROMESA. But momentum in both parties is building for modifying the 43-year-old disaster relief and emergency assistance law to ensure destroyed infrastructure is rebuilt to standards that will withstand future storms.

The Stafford Act "should be" tweaked to allow rebuilding of stronger and more modern structures than what the storms destroyed, House Natural Resources Chairman Rob Bishop (R-Utah) said Tuesday.

He expects disaster recovery legislation for Puerto Rico and the Virgin Islands to include such language.

Bishop’s committee has jurisdiction over the U.S. territories and will play an important role in the islands’ long-term rebuilding of their infrastructure, including their electricity grid.

The Utah Republican, who was part of a bipartisan congressional delegation last weekend to Puerto Rico, the Virgin Islands and the Florida Keys to assess the hurricanes’ damage, said modifying the 1974 law is just "one issue" in the recovery conversation. That discussion spans a spectrum of immediate, middle-range and long-term needs facing Puerto Rico, in particular.

Bishop said he talked to a "whole lot of people" and saw "a whole lot of devastation" on the trip, which included traveling to communities outside San Juan to "get a different perspective."

The chairman said the group "saw evidence of what we need to do in the future" when it comes to the power grid, including burying utility lines underground or using material stronger than wooden poles that "are going to be knocked down again."

Bishop, who generally has a jaundiced view of the federal government’s overall abilities, said on his trip that he "didn’t find anybody who was criticizing FEMA for what they’re doing." Asked if that surprised him, he said: "I was happy about it. But like I said, that’s where the resiliency of the people really showed through."