Sanders and his climate pitch face critical night in Iowa 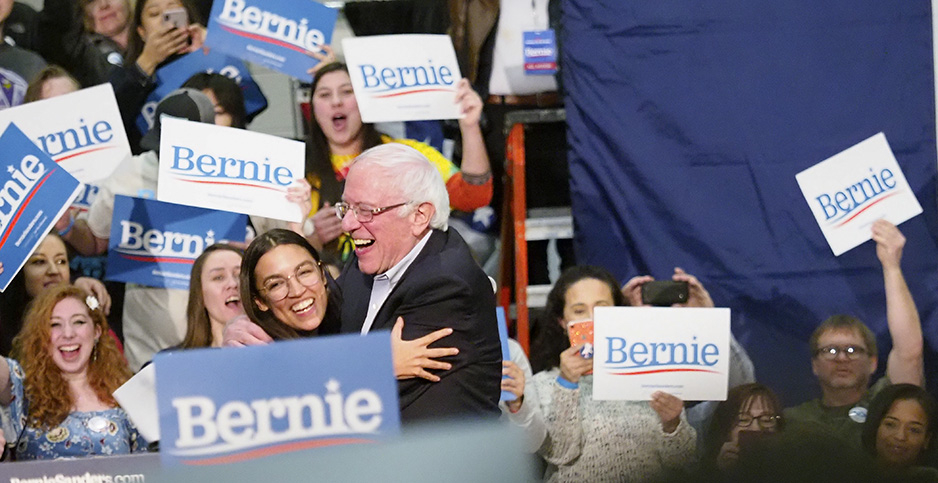 Tonight’s Iowa caucuses will test whether one of the most left-wing presidential campaigns in modern U.S. history can win in Middle America.

With a heavy focus on climate, Vermont Sen. Bernie Sanders is betting that he can mobilize a new base of young and infrequent voters to swamp the more moderate Democratic candidates.

But local residents said they still have concerns about his ability to win a general election against President Trump — even though they increasingly echo his rhetoric on climate and economic inequality, according to interviews with dozens of Iowa Democrats.

That means tonight could be pivotal for the 78-year-old democratic socialist. While Sanders says his progressive policies will bring in new voters, many longtime Democrats — including the ones who propelled him to a virtual tie in Iowa’s 2016 caucuses against Hillary Clinton — are watching for electoral strength.

Kathy Spittler backed Sanders last time. She’s less sure now. Floodwaters destroyed her rural county of Fremont in southwest Iowa. Like many local Democrats, she can point to damage linked to climate change — and worries how Trump’s reelection could bode for curbing those trends.

Wetter conditions are squeezing farmers, whose soggy fields would be ruined under the wheels of their heavy farming equipment. Sandbags have become a common sight in riverside towns across central and eastern Iowa. Even communities far from floods have suffered as transportation networks strain from the disasters; highway closures have forced tractor-trailers to share the road with actual tractors.

The damage from those events has spread far, but unevenly. Big agribusiness has returned to Hamburg, one of the epicenters of 2019’s Missouri River flooding, but entire neighborhoods remain condemned and vacant. A Manildra milling plant, restored and humming, looms over rotting homes with caved-in roofs and spray-painted warnings: "Danger do not enter."

That unequal recovery hangs over this area, which Sanders carried in 2016. But it is still Republican territory, and some voters like Spittler wonder if another vote for Sanders would be too risky.

"I like a lot of his policies, but I think they will bombard him even worse than they’re doing with Biden and Hunter," said Spittler, in reference to former Vice President Joe Biden and his son Hunter Biden, whose job with a Ukrainian gas company has been brought up daily at President Trump’s impeachment trial.

Any of the candidates would be better than Trump, many Democrats said, and they suspect that federal gridlock would result in basically the same climate policy regardless of which candidate occupies the White House.

To them, the candidate who’s best on climate is whoever is most likely to beat Trump.

"We’d love to have somebody who’s more out there, but we have to be realistic about who can win," said Candy Clough, a resident of Storm Lake. Her first choice is Minnesota Sen. Amy Klobuchar, a moderate. Sanders is her second choice.

Sanders’ backers see progress in this attitude. They’ve already done the hard work of getting voters to support Sanders’ policies, they say. Now they just have to get them behind the candidate.

Electability has emerged as a weapon for them, too. The Sanders campaign has begun to emphasize its army of volunteers, supplemented by young climate activists in the Sunrise Movement.

During a rally last weekend, Sanders’ Iowa director, Misty Rebik, announced that campaign volunteers were knocking on two doors per second. And on Saturday, the campaign said its volunteers had knocked on 500,000 doors since Jan. 1. (About 172,000 people participated in Iowa’s previous Democratic caucus.)

"We tried going with a moderate last time, and that didn’t help. We need someone who’s actually going to tackle the issues we care about," said Kimberly Anderson, a resident of northwest Iowa who backs Sanders.

Climate, she added, is one of several areas where the public is closer to Sanders than Trump.

Polls suggest she’s right. Sanders usually outpolls Trump in general election matchups, second only to Biden. And climate’s urgency in the Democratic primary appears to have seeped into the general electorate.

Two-thirds of U.S. voters say they worry about global warming, and hefty majorities support declaring climate change a national emergency and curbing emissions through policies like a carbon tax, according to January polling from Yale and George Mason universities.

Klobuchar co-sponsored the Green New Deal resolution last year, but she has essentially dropped it from her campaign. She joins Biden and former South Bend, Ind., Mayor Pete Buttigieg in advocating for less expensive, market-based policies over a government-driven transition.

Tonight’s results could demonstrate which approach could appeal to the rest of the Midwest.

One unifying trend: Every presidential debate so far has featured one or several candidates linking climate change to farming techniques that sequester carbon.

That’s part of a deeper effort to bring farmers onto the same side as climate activists by showing them how they could profit from carbon markets and other emissions-sequestering policies, said Matt Russell, executive director of Iowa Interfaith Power and Light.

Campaigning on the Green New Deal, as opposed to those targeted appeals, makes some Democrats worry about galvanizing conservatives.

Her husband, Kevin Andrews, a Warren supporter, explained that people have trouble reconciling the cost of the Green New Deal — much ballyhooed in this ethanol-dependent conservative county — with how it might improve their lives.

"It continually comes up, and the Green New Deal creates a lot of sputtering," he said.

In the face of pushback from Republican lawmakers and Fox News personalities, some Democrats said the Green New Deal isn’t worth the electoral baggage. But beneath the slogans, they said there are signs that its core dynamic is taking hold: Make the rich pay for climate change.

John Johnson, another Democrat active in the Fremont County party, thinks the country could unify around Biden. Sanders, he said, would undermine his own agenda by driving people further apart.

But even as an affluent man, Johnson said, he appreciates that Sanders has reframed the 2020 campaign.

"Why should anybody have a private jet?" he said.