Sanders demotes carbon taxes. Here’s what it means for Dems 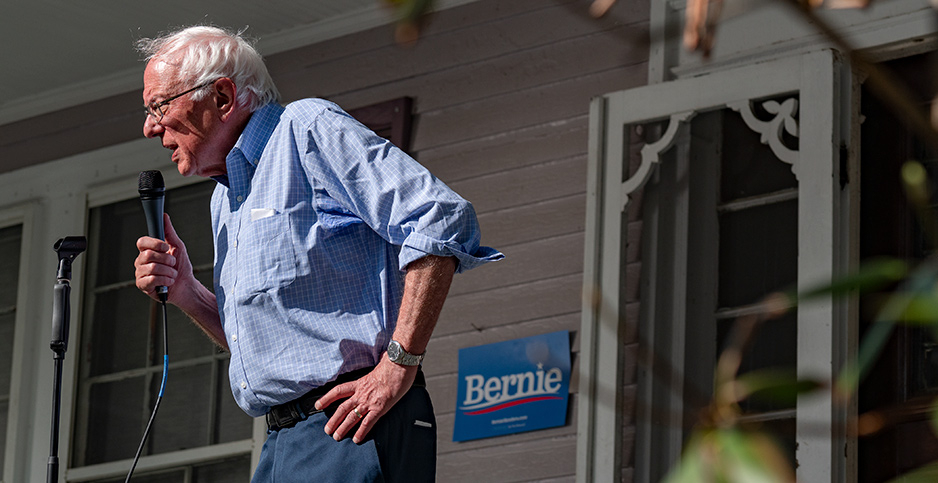 When Sen. Bernie Sanders ran for president three years ago, he routinely held up his support for carbon taxes as proof he was more committed to addressing climate change than rival Hillary Clinton.

"I believe we should have tax on carbon and deal aggressively with climate change. That is not her position," Sanders (I-Vt.) said in one 2016 segment of "Meet the Press."

This time, the long-serving Vermont lawmaker is taking a different tack.

His 2020 presidential campaign still focuses on global warming, but gone are the regular broadsides over carbon pricing. Missing, too, is any reference to carbon taxes in the climate section of his official campaign website.

Instead, Sanders has chosen to emphasize the Green New Deal when talking about climate change — a shift that underscores how much the politics of global warming have transformed in a few short years. Part of that, perhaps, is a broader decline in enthusiasm for carbon pricing among left-leaning politicians and activists.

What all this ultimately means for the political futures of Sanders and carbon pricing is a matter of debate. But it’s clear the idea has taken a back seat in Sanders’ approach to the 2020 election.

For example, Sanders’ Senate office is gearing up a legislative push to flesh out his ideas about what the Green New Deal should look like. While it won’t be formally associated with his presidential bid, it will likely serve as a de facto statement of Sanders’ principles on the campaign trail.

It’s not clear what form the legislation will take — whether it’s the kind of singular Green New Deal-style bill or a series of smaller measures. But government spending will be the linchpin, and carbon pricing may not have a role at all.

"I foresee this as being a stand-alone measure that is focused primarily on public investment, and that’s kind of the approach that a lot of people are taking with the Green New Deal," said Keane Bhatt, a spokesman for Sanders’ Senate office.

Robert Hockett, a Cornell University professor who advises Sanders and other Democrats, said Sanders’ shift in rhetoric doesn’t necessarily mean he no longer supports a tax on carbon emissions.

Sanders "doesn’t tend to abandon positions he once held," Hockett said. "But he does occasionally add new ideas that complement or supplement his past positions."

Hockett told E&E News that he wrote a speech for Sanders — which has yet to be delivered — on what kind of Green New Deal the Vermont lawmaker envisions.

The speech did not include a carbon tax, but Hockett said he still could see a scenario in which carbon taxes play a role in the Green New Deal or in a future effort by Sanders on climate change.

"I anticipate he is going to keep advocating the same stuff he’s been advocating," Hockett said.

Sanders hasn’t publicly repudiated carbon pricing, but his current silence on the issue is a sign of where the progressive climate movement is heading, said Erich Pica, president of Friends of the Earth.

"You’re seeing the transformation of the debate, where carbon tax, carbon markets, carbon pricing used to be seen as the primary vehicle to achieve carbon reductions," Pica said. "And now it’s becoming viewed more as a way to pay for the policies and the investments that need to be made to transform the economy, and I think that’s a fundamental change in assumption and a fundamental change in how carbon pricing functions."

In short, the argument is that massive emission reductions require so many technological and economic changes that a simple price on carbon — once seen as a kind of miracle solution — won’t be sufficient to avoid dangerous climate change.

In a way, the shifting debate means Sanders — who has spent his entire political career criticizing inequality and the corporate forces now pushing for a carbon tax in the advocacy world — can be more ideologically consistent with his climate stances.

The idea of creating an "economically efficient transformation," Pica said, buys into the same "mentality" that brought on wealth accumulation and inequality in the first place.

All that said, Sanders’ shift in focus is striking.

During the 2016 campaign, Sanders repeatedly hammered Clinton over her unwillingness to get behind a tax on carbon emissions. "I would ask you to respond. Are you in favor of a tax on carbon?" he asked in one debate.

Later — after Clinton had sewn up the Democratic nomination — Sanders pressed to include carbon taxes in the party’s 2016 platform in part by appointing longtime environmentalist Bill McKibben to the drafting committee.

"He’s talked about it at every possible opportunity, so I’d be surprised if he didn’t want it in the platform," McKibben said of a carbon taxes at the time. "It’s one of the, um, keystones of his stump speech!" (Climatewire, June 15, 2016).

The effort was partially successful.

The platform didn’t include an explicit endorsement of carbon taxes but instead noted that "greenhouse gases should be priced to reflect their negative externalities, and to accelerate the transition to a clean energy economy" (E&E Daily, July 11, 2016).

Cornerstone or a sideshow?

Ever since, carbon taxes have been on a roller-coaster ride.

For one, there has been increased interest in the policy among centrists and conservatives. New advocacy groups such as the Alliance for Market Solutions and the Climate Leadership Council have attempted to drum up support for the policy — especially among Republicans.

The bill went nowhere, but it was notable that a Republican introduced the proposal, especially since the House — then under GOP control — had passed a resolution only days beforehand that described carbon taxes as "detrimental" to the U.S. economy. Just six Republicans, including Curbelo, opposed it.

A legislative push for carbon taxes is back again this year.

One measure, proposed by Reps. Ted Deutch (D-Fla.) and Francis Rooney (R-Fla.), would place a $15-per-ton tax on carbon emissions that would increase $10 annually. The bill has about 40 co-sponsors in the House and is supported by the advocacy group Citizens’ Climate Lobby.

Democratic Sens. Sheldon Whitehouse of Rhode Island and Brian Schatz of Hawaii are championing another version that would impose an initial $52-per-ton tax on carbon. A co-sponsor is Sen. Kirsten Gillibrand (D-N.Y.) — one of the roughly dozen congressional Democrats running for president.

"Nearly every economist who has seriously studied climate change has concluded that a carbon fee needs to be a big part of the solution," said Whitehouse in a statement announcing the bill.

Sanders has not signed on to the measure as a co-sponsor.

Gillibrand isn’t an outlier in her backing of carbon taxes this year, but there hasn’t been a groundswell of support, either, for the policy among the 2020 Democratic field.

The idea has been embraced by candidates such as former Rep. John Delaney (D-Md.) and South Bend, Ind., Mayor Pete Buttigieg. Other hopefuls, including Sen. Michael Bennet (D-Colo.), have sidestepped the idea.

One candidate to watch on carbon taxes is Washington Gov. Jay Inslee. He has made climate change the top priority during his Democratic primary campaign, and during his time as governor he tried — but failed — to put a carbon tax in place (Climatewire, Jan. 18).

So far, his presidential campaign has focused on other ideas, such as slashing carbon pollution in cars, buildings and power plants.

It’s a nod, perhaps, to the political challenges of a carbon tax, which go back 10 years to the failed effort among Democrats to pass a carbon cap-and-trade bill. That measure, led by then-Reps. Henry Waxman (D-Calif.) and Ed Markey (D-Mass.), passed the House but stalled in the Senate.

"You can get enormous benefit without, perhaps, a carbon-pricing system," Inslee told NBC News in January. "That should not totally take it out of consideration, but there’s many, many ways to skin this cat."

Even Markey, now a senator and Green New Deal advocate, appears to have concerns about carbon pricing and its implementation.

"Now, there were some proposals from the private sector which say: Let’s move to a carbon price. And then I would say: How high is that price? Is it $80 a ton? Is it $100 a ton?" he said recently. "What do you support, Exxon Mobil, when you say you support a price on carbon? What is that price that you support? The price that economists say would be necessary, or is it just some nominal price over here?"

Andrés Bernal, an adviser to Green New Deal champion Rep. Alexandria Ocasio-Cortez (D-N.Y.), said it’s clear that carbon taxes have had trouble gaining political support in the past. And that’s one reason why the idea hasn’t caught fire in the Democratic presidential field.

But he argued that another reason that carbon taxes are taking a back seat to other alternatives is because activists and voters — especially millennial voters — are demanding a more ambitious response to global warming.

"Without having a robust plan to create jobs and create renewable infrastructure, a carbon tax is just a very weak approach," he said.

That doesn’t mean Bernal doesn’t see carbon taxes as part of the equation at some point. But, he added, "I feel we’re very locked into what we can do when we lead with a carbon tax."