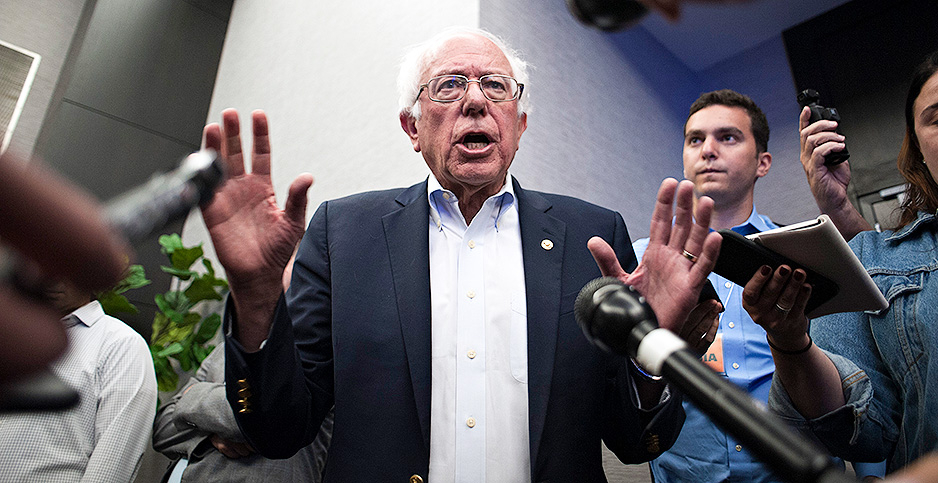 Sen. Bernie Sanders is expected today to unveil his plan to address climate change, and a preview of his proposal reveals a vision that’s consistent with his eat-the-rich rhetoric — as he would make wealthy Americans, fossil fuel companies and the Pentagon pay for much of it.

In the same populist vein, the Vermont senator and 2020 Democratic contender also wants to break the fossil fuel industry and shift the United States toward publicly owned renewable energy sources. That includes a pledge to reach "100 percent sustainable energy for electricity and transportation by no later than 2030" and "complete decarbonization" of the U.S. economy by 2050, according to the plan.

"The federal government electrified America as part of the New Deal. The United States of America put people on the moon 50 years ago," noted the plan’s authors. "We can sure as hell transform our energy system away from fossil fuels to 100 percent renewables today and create millions of jobs in the process."

Sanders’ vision bears some similarity to the climate plans released by many of his rivals in the Democratic presidential field, raising questions about whether he will get a political boost from the proposal. Sanders will unveil the plan today while visiting areas of California that were devastated by the 2018 Camp Fire.

On the broadest level, Sanders calls for a $16.3 trillion investment to transform the U.S. economy in a manner consistent with the Green New Deal, an idea championed by environmentalists that would fight climate change with a government-led jobs program.

Sanders wants the government to help create 20 million jobs in areas such as auto manufacturing, construction, energy efficiency retrofitting and renewable power plants. He also calls for "massive investments" in fields that include energy storage and electric vehicles.

In a nod to the environmental justice ethos pushed by groups such as the Sunrise Movement, Sanders wants to create a $40 billion Climate Justice Resiliency Fund that would help vulnerable populations deal with the consequences of a rapidly warming planet.

"The scope of the challenge ahead of us shares some similarities with the crisis faced by President Franklin Delano Roosevelt in the 1940s," wrote the Sanders campaign in its introduction to the plan. "Battling a world war on two fronts — both in the East and the West — the United States came together, and within three short years restructured the entire economy in order to win the war and defeat fascism."

It’s a message shared by many of Sanders’ competitors. Sanders is one of six senators running for the White House who have backed the Green New Deal. And several 2020 candidates have taken up its philosophy of comparing the fight against climate change to the battles against the Great Depression or the Axis powers.

Many of his rivals have taken up similar points outlined in his plan, from calling for an end to government subsidies of the fossil fuel industry to a vow to stop all new drilling on public lands and waters.

Even Sanders’ aim to invest $16.3 trillion in the fight — an eye-popping figure, to be sure — has parallels in other campaigns. Former Vice President Joe Biden wants to mobilize $5 trillion in public and private spending on climate change. Sen. Elizabeth Warren (D-Mass.) also envisions the deployment of trillions of dollars to address climate change.

Environmentalists have been anticipating the release of Sanders’ plan for some time. And he could use the potential bump in attention.

The rollout of his proposal comes at a challenging time for Sanders. His poll numbers in the Democratic primary have stalled in the 15% range, according to four polls that CNN conducted in April, May, June and August.

A recent poll average compiled by RealClearPolitics produced a similar result. It put Sanders at 16% — which is roughly even with Warren and about half of Biden’s support of 29%.

Worrisome, though, for Sanders is that Warren has steadily increased her support since April while he has remained level. The four months of CNN polls suggest that Warren — and not Sanders — has benefited more from Biden’s decline in popularity since the former vice president entered the race.

In CNN’s August poll, 29% of respondents supported Biden — 10 percentage points less than in April. Into that gap has jumped Warren, who increased her backing from 8% in April to 14% in August. Sanders meanwhile hasn’t budged from 15% in both April and August.

The issue of climate change, perhaps, provides some insight into these figures.

When Sanders ran against former Secretary of State Hillary Clinton in the 2016 Democratic primary, he was the undisputed champion of the party’s left flank. On climate change, for example, he attacked Clinton for not supporting carbon taxes as a way to reduce emissions (Climatewire, June 30).

But the 2020 race is an entirely different ballgame.

Multiple candidates, from Biden to South Bend, Ind., Mayor Pete Buttigieg, have plans that include a carbon tax. Indeed, many of the competitors in the 2020 field already have outlined ambitious proposals to deal with climate change (Climatewire, July 30).

Sanders, who had the left lane to himself in 2016, is months behind former Rep. Beto O’Rourke (D-Texas) in releasing his response to global warming. And Warren’s proposal shares Sanders’ anti-corporate messaging by pledging to tax big companies more to pay for climate action.

Not that Sanders hasn’t been active on the issue of global warming.

He’s stumped with the Sunrise Movement and other activists in support of the Green New Deal. In July, he teamed with Reps. Earl Blumenauer (D-Ore.) and Alexandria Ocasio-Cortez (D-N.Y.) to introduce a symbolic resolution that would define global warming as a "climate emergency." And he suggested recently that the United States cut military spending to fight climate change, an idea that worked its way into his latest proposal.

But it’s been harder for Sanders to break through on the issue — though it may be easier now that Washington Gov. Jay Inslee has left the race (see related story).

While less popular than Sanders in polling, Inslee made climate change the cornerstone of his presidential campaign — a banner that pulled attention away from Sanders and kept major environmental groups on the sidelines, at least publicly.

Inslee also flooded the zone with climate ideas, making it harder for other candidates to stake out new or innovative positions.

This week — prior to dropping out — Inslee released the latest plank of his climate platform. It focused on agriculture and rural economies, and the new chapter means Inslee’s climate plan now stands at 213 pages of specific policies, according to a campaign spokesman.

What might set Sanders apart is his focus on soaking the rich and big corporations.

His plan looks to generate an estimated $3 trillion by going after the fossil fuel industry through litigation, taxes and fees, and by eliminating federal subsidies.

It also would collect $2 trillion from the wealthy and large corporations, and net another $1.2 trillion by "scaling back military spending on protecting the global oil supply," according to a summary of the plan.