Sanders scored a big climate endorsement. How it could help 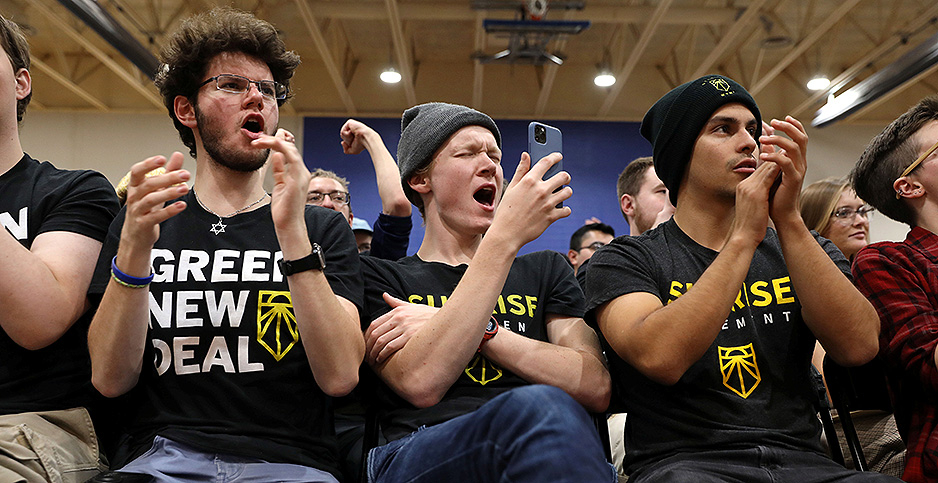 Activists with the Sunrise Movement cheer at an Iowa climate summit that featured Sen. Bernie Sanders (I-Vt.). The group yesterday endorsed Sanders for president, a major boost for him in climate circles. Scott Morgan/Reuters/Newscom

The Sunrise Movement is throwing its weight behind Bernie Sanders’ presidential campaign, offering the Vermont senator a 50-state volunteer base and a tighter grip on young voters, one of his most important constituencies.

Almost nobody was surprised by the endorsement. An overwhelming number of the group’s voting members — 76% — wanted to endorse Sanders. That level of support could prove important at a time when no Democratic candidate can claim a lead in the early-voting states. Recent polls in Iowa and New Hampshire have shown Sanders in a statistical tie with former Vice President Joe Biden and former South Bend, Ind., Mayor Pete Buttigieg. And Massachusetts Sen. Elizabeth Warren isn’t far behind.

Polls also show climate change is a top issue for Democratic primary voters. Sunrise members will campaign for Sanders as "the candidate best-suited to kick off the Decade of the Green New Deal," and they will focus their canvassing efforts on college campuses and other youth-heavy areas. The group will also run digital ads as well as phone and text banks. Sunrise leaders will rally with Sanders in Iowa later this month.

That fits into Sanders’ strategy in a few ways. The senator’s theory of change rests on mobilizing nonvoters. He argues that he can bring them into the political process by promising transformative change and by leveraging local activists — boxes that the Sunrise Movement ticks.

"Bernie Sanders is one critical part of the equation, but he won’t be everything," Varshini Prakash, co-founder and executive director of the Sunrise Movement, said in a video announcing the endorsement.

"When Bernie Sanders says he’ll be the organizer in chief, what I hear is that he’s saying that it isn’t just about him, that we can’t enact a political revolution in this country just because of one man or one moment. This has to be the sustained effort of millions of people."

It’s not clear how many volunteers the Sunrise Movement will bring to the race, but more than 3,000 voted in its endorsement process and more than 10,000 were eligible to cast a ballot, the group says. It has about 300 chapters distributed across every state, which could become increasingly important if the primary remains competitive into the summer, as campaigns will have less time and fewer resources to devote to each state.

"This is another — add it to the other grassroots organizations who have supported our campaign. We believe change comes from the bottom on up, from grassroots activism, and certainly that’s what Sunrise is about," Sanders told E&E News in a brief interview.

Warren stands to lose the most from Sunrise’s endorsement of Sanders. Garnering about 17% of the group’s vote, she still earned warm words from Sunrise, which said its endorsement was an affirmation of Sanders rather than a rebuke of her. They both get high marks on Sunrise’s political scorecard; Sanders gets 181 and Warren is 171, compared with 75 for Biden. But it’s another sign that Warren, after picking up endorsements and public support over the summer, has lost momentum as Sanders consolidates progressive voters.

The endorsement is something of a gamble for Sunrise. There are risks — but also potential upsides — if the Green New Deal becomes closely associated with Sanders. The Sunrise Movement helped launch the ambitious outline that calls for rapid decarbonization of the U.S. economy, and its leaders pressured every Democratic candidate to embrace it.

"There could be some drawbacks to wedding a [policy] package to a specific politician. You know, there’s all sorts of unforeseen things that could happen," said Julian Brave NoiseCat, vice president of policy and strategy at the think tank Data for Progress.

But there are signs that Sanders is getting better at the inside game. Hours after the Sunrise announcement, he led a press conference on Capitol Hill about Iran and was joined by several senior lawmakers, including his former presidential rival, Sen. Kirsten Gillibrand (D-N.Y.).

That means even if he loses the nomination race, Sanders could use his public support to pressure the eventual nominee to adopt a progressive climate stance.

"If he ends up pulling in a good amount of delegates — maybe winning a majority or making a strong showing — I think that ultimately gives more leverage to climate activists and progressives in the negotiation around who’s on the Democratic ticket and what the party platform looks like, what the priorities are," NoiseCat said.