‘Save your praise. We don’t want it,’ Thunberg tells Dems 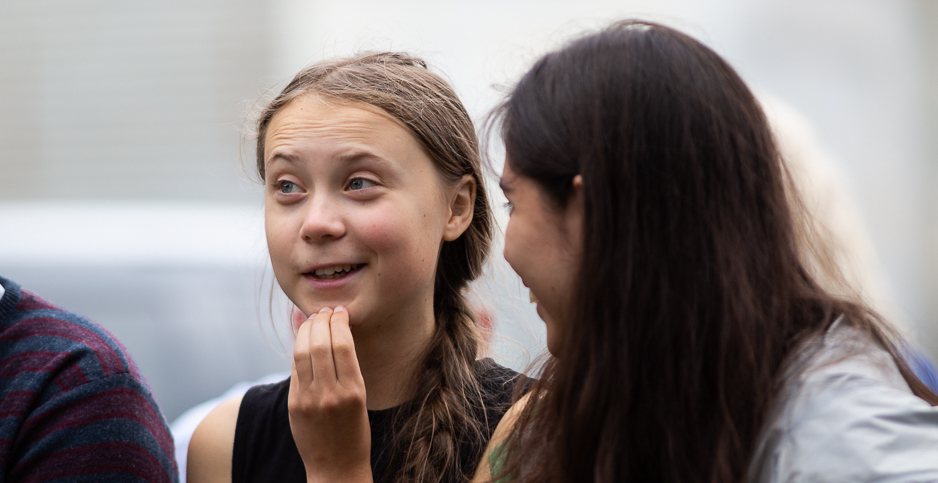 Greta Thunberg’s school strike activism and blunt confrontations with politicians have moved from Sweden’s parliament to the world stage and now the U.S. Capitol.

Democrats spent the day yesterday shepherding Thunberg and other youth activists around Capitol Hill, but their efforts to corral her into photo opportunities and press-friendly meetups with senators did not go exactly as planned.

And despite what observers and supporters around the world have dubbed the "Greta Thunberg effect," it’s not clear that Thunberg and the budding coalition of young climate activists can galvanize a sluggish Congress to do anything significant about climate change.

The 16-year-old Swedish activist is part of a movement that cares not about clean energy research wins in appropriations bills, but rather big structural change — shaming people for flying and getting rid of fossil fuels altogether, the very things that Republicans have already started mocking in campaign ads.

As Thunberg put it in a remarkable exchange with Democratic senators yesterday, young activists don’t want to be thanked for their efforts.

"Please save your praise. We don’t want it. Don’t invite us here to just tell us how inspiring we are without actually doing anything about it because it doesn’t lead to anything," Thunberg told senators after they spent nearly an hour at a public roundtable praising her and other youth activists.

To that end, at two events with Massachusetts Sen. Ed Markey and other Senate Democrats yesterday, Thunberg spoke only once and kept mostly away from the camera’s eye.

At a news conference in the morning, she never neared the podium where other youth activists were standing, where she could easily have been photographed next to Markey and plastered on materials for his 2020 campaign.

She didn’t take questions from the media circus following her around for the day either.

Still, Democrats hope they can tap into the political energy she represents in 2020 and cause ripple effects among Republicans.

It’s similar to what they looked to do during debate on the Green New Deal earlier this year, when Majority Leader Mitch McConnell (R-Ky.) forced a vote on the progressive resolution in an effort to divide Democrats and make them look foolish for supporting "socialism."

On some level, McConnell got what he wanted. A few moderate Democrats voted "no," while the rest, including the resolution’s co-sponsors, voted "present." But Democrats were also able to underscore the Senate’s historic inaction and win concessions on the science from Republicans long skeptical about the reality of climate change.

Thunberg’s appearance on the Hill "sends a message to the people who are my kids’ age that we’re not just trying to protect the incumbents and hang onto the past," Sen. Martin Heinrich (D-N.M.) said in an interview.

"Mitch McConnell represents sort of the inertia in the system, and she represents the spark of the future," he said.

Markey, too, said that Thunberg and her fellow youth activists are putting "real pressure" on politicians to do something big and aggressive about climate change. He noted global warming has gotten more airtime in the mainstream media and at the presidential debates than ever before, in part due to intense pressure from young progressive activists.

"You’ve put a spotlight on this issue in a way that it has never been before," Markey said in response to Thunberg’s comments at the task force meeting. "And that is creating a new X factor in the politics of the United States for 2020."

That doesn’t mean, however, that Thunberg is especially interested in photo ops with politicians.

"I know you’re trying, but just not hard enough," she added. "Sorry."

‘I sure as hell hope so’

At the same time, Thunberg has helped spur an impressive political movement that could incentivize lawmakers to try a little harder.

Her lonely school strike, which started last year, has turned into a worldwide movement of students who skip school on Fridays to call for action on climate change. She’s appeared on the cover of Time magazine and has been widely credited for bringing renewed attention to climate change in Europe.

Thunberg and Fridays for Future will lead a worldwide climate strike Friday ahead of U.N. climate talks on Monday.

"I was one of the first strikers here in the United States, and I have watched this movement grow from a movement of two people to a movement of almost 800 locations around the country this next Friday," Kallan Benson, a teen activist from Maryland, said at a news conference yesterday.

Thunberg has also been on a high-profile media tour in the U.S. — making appearances in The Washington Post and on "The Daily Show" — after crossing the Atlantic on a zero-emissions sailboat last month.

Her time on Capitol Hill isn’t over yet. She’s set to testify at a joint hearing this morning. House Natural Resources Chairman Raúl Grijalva (D-Ariz.) and Rep. Jared Huffman (D-Calif.) are also hearing from youth activists.

It will come just a few days after a Washington Post and Kaiser Family Foundation poll found that a large majority of American teens believe that man-made climate change will cause harm to their generation.

And 24% have taken political action, including rallies and writing to lawmakers. About 1 in 7 have participated in a school strike, according to the poll, which has a margin of error of 5 percentage points.

Those teens, of course, aren’t old enough to vote, and many won’t be when the 2020 elections roll around, but the numbers are striking.

Barry Rabe, a University of Michigan professor who has been teaching environmental policy classes for decades, said that anecdotally, he’s seen more of his college-aged students talking more seriously about how to get involved in climate politics and effect change.

Politically, Rabe added, Thunberg could be a good figurehead for that movement because she "stays relentlessly on message" and is difficult for critics to dismiss.

"Does that flip an election outcome? I’m not sure, but it’s not trivial," Rabe said.

Democrats believe that young activists, including Thunberg and the Sunrise Movement, have already started to change the conversation in Washington, D.C.

"They have provided a kick in the butt to the people who have been working on climate for a while but not been succeeding," said Sen. Brian Schatz (D-Hawaii). "They are appropriately forcing us to ratchet up our ambition and our determination."

On some level, the aftermath of Friday’s international school strike could provide some insight into whether all the noise really means anything for legislation.

"Right before I left for D.C., a friend asked me, ‘Does striking really do anything?’" Madelaine Tew, a youth climate activist from New Jersey, who helps lead Zero Hour, told lawmakers yesterday. "And my response was, ‘I sure as hell hope so.’"