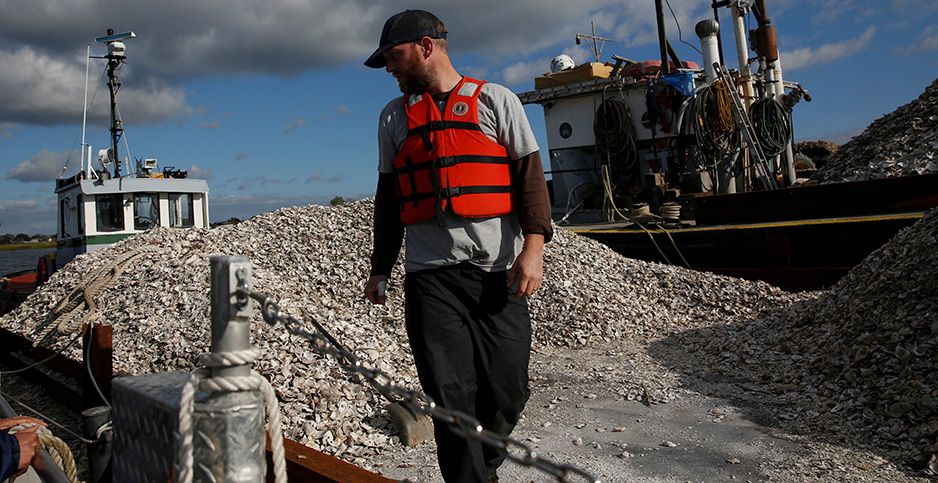 NEW YORK HARBOR — It’s an odd scene in New York Harbor. On the banks of tree-lined Governors Island, a small group has gathered to watch a tiny gray boat anchor itself in the water.

Two figures lean over the side of the vessel, their red life vests standing out against the slate waves. Each clutches several rust-colored mesh sacks, dangling just above the surface of the water.

With that, they drop the bags and watch them sink into the murky depths.

Each sack is filled with dozens of live oysters. Ten feet below the little boat, they settle into their home at the bottom of the harbor: an artificial reef, made of steel and wire structures resting on mounds of rock and shell.

A few moments later, a pair of divers in fins and masks slip into the water and position the sacks around the wire "oyster condos." Then they leave the shellfish to the joys of city living under the sea. By the time the biodegradable sacks dissolve, typically within a month or so, the oysters should be slowly growing together in neighborly clusters beneath the waves.

This latest deposit — about 5,000 oysters in total — is part of a special program known as SOAR, or Supporting Oyster Aquaculture and Restoration, a partnership between the Nature Conservancy and the Pew Charitable Trusts.

Born out of the coronavirus pandemic, the program began as a way to prevent farmed oysters from going to waste while restaurants were still shut down. SOAR purchases oysters from farmers who would otherwise be unable to sell them, then partners with local oyster restoration projects to return the shellfish to their natural habitats.

That has built-in benefits for coastal ecosystems. Oyster reefs help clean and filter the water, provide natural habitat for fish, and buffer coastlines against the erosion caused by wave action and sea-level rise.

SOAR’s New York partner is a program known as the Billion Oyster Project. Founded in 2014 by Murray Fisher and Pete Malinowski, it aims to restore 1 billion oysters to New York Harbor over the next 15 years. So far, it’s installed 14 reefs across the city.

This recent batch is likely the last bunch of oysters to be planted in New York City through the SOAR project — at least for the time being. With the COVID-19 vaccine rollout in full swing, the city has largely reopened, and restaurants have resumed serving shellfish.

But the program will likely continue in other forms, according to Jennifer Browning, director of Pew’s U.S. oceans program. SOAR is working to establish a permanent market, providing funding for oyster restoration projects to purchase otherwise "unsellable" oysters from farmers.

Even without the pressure of the pandemic, "anywhere from 15 to 20% of all the oysters grown by oyster farmers can’t be sold to restaurants — they’re too big or ugly or flat," Browning told E&E News. "But if those oyster growers knew that that 20%, they could sell that, that’s a huge benefit to them — and a huge benefit to the oyster restoration community."

New York Harbor was once an oyster capital of the country.

"Back in the day, here in New York City, oysters were sold on street corners like pretzels are today," said Rob Jones, global lead for the Nature Conservancy’s aquaculture program.

But over the last century, they’ve largely disappeared. In New York, that’s mainly because of pollution. As the city grew and developed, more and more sewage was diverted into the harbor. Eventually, it became unsafe to harvest oysters, and the industry shuttered.

In years since, "there are a lot of other reasons why oysters didn’t continue to thrive," said Katie Mosher, the Billion Oyster Project’s director of programs. Dredging, used to deepen and expand the harbor, killed many of them off. Disease and poor water quality played a role, too.

It’s not a problem that’s unique to New York.

Oyster populations have plummeted up and down U.S. coastlines and elsewhere around the globe. They were decimated by overharvesting, pollution, disease and habitat destruction. In a 2011 study published in BioScience, experts estimated that about 85% of the world’s oyster reefs have vanished over the last century.

Today, scientists and environmentalists are working to bring them back.

The ecosystem benefits are clear, Jones said. Oysters provide a natural cleaning service, filtering toxins out of the water. And their clustered reefs become natural homes for fish and other marine animals, just as coral reefs do in the tropics.

Like coral reefs, they also protect coastlines from erosion, breaking up waves before they hit the shore.

It’s an increasingly attractive service as climate change warms the planet. Sea-level rise is a growing threat to coastal communities worldwide, eroding shorelines and worsening floods. At the same time, global warming is making hurricanes more intense. That increases the odds of extreme storm surge and major damage to the coast.

With their coastlines flooding and their beaches steadily washing away, coastal communities are making increasingly costly investments in shoreline protections. Multibillion-dollar interventions, including building sea walls and diverting major rivers, have recently been proposed, in places such as Louisiana, South Carolina and New York.

At the same time, there’s a growing push in some coastal communities for cheaper, more sustainable interventions. "Living shorelines" offer one alternative. These are naturally cultivated coastal buffers, made up of sand, rock, marshlands and vegetation — and, sometimes, oyster reefs.

The combination of these natural protections, when put together, tends to make the biggest difference, said Antonio Rodriguez, an expert on coastal geology at the University of North Carolina. In the Southeast, for instance, where beaches are often soft and easily eroded, "the iconic configuration would be to have upland, which is a forest, and then salt marsh, and then oyster reefs," he said.

Where natural oyster reefs have largely disappeared, experts say putting them back may help restore some natural protection. And case studies on rapidly eroding shorelines — for instance, in Alabama and Bangladesh — have shown that it can actually work.

It’s not a new idea — communities up and down the coasts have been experimenting with oyster restoration and living shorelines for decades. But the concept has gained attention in recent years with the growing threat of climate change and sea-level rise. Living shoreline projects have cropped up everywhere from the Chesapeake Bay to Alabama’s Gulf shore.

Meanwhile, organizations like Pew and the Nature Conservancy are working to expand local restoration projects.

"We are working with states — New York, New Jersey, but also in the Gulf in Mississippi and Louisiana — to help them develop oyster restoration plans," Browning said. "We do the research — where could you put oyster farmers, where would oyster restoration occur — so that every state has sort of a long-term plan for rebuilding their oyster population."

The question now is whether oysters themselves will be able to adapt to the impacts of climate change. There’s evidence that they can, according to Rodriguez.

There are two different types of oyster reefs, adapted to different kinds of conditions. Subtidal oysters stay permanently submerged beneath the water. Intertidal oysters, on the other hand, grow closer to the shore, where the tide ebbs and flows. They’re sometimes submerged and sometimes exposed.

There’s a sweet spot for these intertidal oysters, research has found. Too much water or too much air can destroy them.

Intertidal oyster reefs may have slightly more value as coastal protections, Rodriguez noted. They’re more common in the South, where shorelines tend to be softer and more vulnerable to erosion. They also grow closer to the shore, meaning they may be better at breaking up waves.

As sea levels rise, there’s the potential that they could be permanently submerged. But Rodriguez says there’s evidence that oysters can adapt.

One of his own studies, published in 2014 in Nature Climate Change, found that oyster reefs in the Mid-Atlantic may grow faster than scientists previously believed. That means they may be able to keep pace with the rate of sea-level rise and build up before the rising ocean can drown them.

While studies show that reef restoration can make a difference, it depends on how long the reefs actually last. Rodriguez says he’s seen new reefs thrive in their first year or so, only to collapse later as predators move in.

Long-term monitoring is key in these cases, he said. But restoration studies are often funded for only a few years.

"Before we jump into multimillion-dollar projects, we need to start slowly and do some test projects before we scale up," he suggested. "Lots of investments are made in oyster restoration, and it’s monitored for a year after, and it usually shows that they’re doing really well. If you go back five years from now, are they still doing well?"

Restoration projects must also choose their sites carefully, said Jonathan Grabowski, a marine scientist at Northeastern University. They must be mindful of water quality and the softness of sediments so oysters don’t catch diseases or get buried in mud.

But there’s reason to believe that well-crafted restoration projects can have long-term success, Grabowski added. Follow-up studies, looking at restored reefs years or even decades after they were first planted, have found that some of them are still thriving.

"The studies that are out there that look longer-term definitely suggest that oyster restoration can sustain living reefs for much longer than just a year or two," he said.

That said, there are still untold threats from climate change.

Without serious efforts to cut greenhouse gas emissions and curb global warming, oyster reefs and other coastal protections can only do so much. They may buffer shorelines against erosion, but they can’t halt the process — especially as sea-level rise accelerates and hurricanes intensify.

"Oyster reefs can definitely reduce wave energy — when coupled with marshes, they can slow down coastal flooding — but my fear is that the system is gonna be overwhelmed, given the scale of the problem," Grabowski said.

"Remember, they provide a whole host of services, and even if they don’t fully stop coastal flooding, they’re filtering the water; they’re providing habitat for fishes and providing other important services," he said. "Those are services we shouldn’t forget about, even though climate change is the existential threat we’re all worried about."

Correction: An earlier version of this story quoted John Grabowski, a marine scientist at Northeastern University; his name is Jonathan Grabowski.