Schneiderman’s energy legacy: A finger in every pie 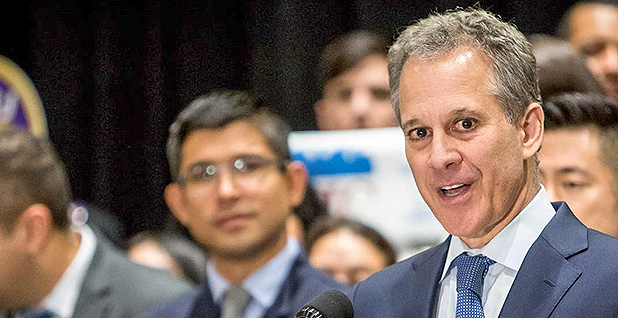 Eric Schneiderman, the former New York attorney general who resigned Monday night, used his bully pulpit on issues across the energy and environment sphere, from pipelines to smog to regional carbon trading. agschneiderman/Instagram

Even in the tumultuous world of New York politics, Attorney General Eric Schneiderman’s sudden resignation Monday registers as an earthquake.

From the standpoint of energy and environment, though, it might not change all that much.

Why? According to veteran political observers, there’s a deep bench of ambitious, left-leaning lawyers in the state’s Democratic circles. Moreover, Democrats in the state Legislature get to pick his immediate replacement, setting the tone before elections this November.

Barring an upset by Republicans, these analysts said they expect Schneiderman’s successor to be every bit the bulldog he was on energy and climate.

"I think whoever takes his place, it doesn’t change anything. Anything," said Kevin Rooney, CEO of the Oil Heat Institute of Long Island and a former lobbyist in Albany. "All the positions that he’s taken on the environment, on climate change, moving to renewables, the whole bit, they’re going to get picked up by whoever comes in there."

There’s plenty to pick up. Schneiderman, a Democrat who was elected attorney general in 2010, was already an active litigant on energy and climate even before President Trump took office in January 2017; he joined a lawsuit against President Obama’s EPA to make soot regulations tougher, for example. Schneiderman intensified his federal campaigning under Trump, marshaling a legal challenge, or the threat of one, with seemingly every action the White House took.

When Energy Secretary Rick Perry asked the Federal Energy Regulatory Commission to look at special payments for coal and nuclear power plants, Schneiderman opposed it. When New York blocked natural gas pipelines and the pipeline companies sued, Schneiderman opposed them. Under Schneiderman’s supervision, his office has sued to maintain federal greenhouse gas emissions standards for cars and threatened to sue if the Interior Department allows oil drilling off the New York coast.

As recently as Monday afternoon, he was tweeting big plans to lead a group of eight state attorneys general "against Scott Pruitt’s absurd plan to have the EPA limit the science it uses to make decisions about our public health and our environment."

That litigious zeal was utterly typical for New York, where the last two attorneys general, Andrew Cuomo (D) and Eliot Spitzer (D), eventually became governors. (Spitzer resigned in 2008 following a prostitution scandal.) And to politicos in New York, it was clear that Schneiderman had his eye on the governor’s seat in the medium-to-long term.

But Schneiderman’s tenure came to an abrupt end this week, after a New Yorker story quoted women on the record alleging that he had physically abused them. Schneiderman resigned hours later; he denies that he assaulted anyone. The Manhattan district attorney is investigating the allegations.

Cuomo, who called for Schneiderman’s resignation after the New Yorker story came out, yesterday applauded the women who spoke out.

"I think the collective movement is to be applauded," Cuomo said.

"This nation has a chronic disturbing disgusting behavior of sexual harassment against women, and it has gone on for a long, long time, and it must stop," he said.

Barbara Underwood, the state’s solicitor general since 2007, was sworn in yesterday as Schneiderman’s acting replacement. In a statement, she said the staff of the attorney general’s office "will ensure that our work continues without interruption."

The Schneiderman news set off a chaotic day of speculation in New York politics. Democrats already control the governorship and one house of the Legislature, with the prospect of gaining yet more seats in this November’s election. The state Assembly, led by Speaker Carl Heastie, a Bronx Democrat, will have outsize importance in selecting Schneiderman’s replacement.

In a state that already has an effective ban on hydraulic fracturing, an aggressive renewable energy program and a deepening anti-fossil-fuel mentality, that might not mean much in terms of policy changes. But it will mean a lot for the state’s Democratic power hierarchy.

"There’d been a settled structure for how the hierarchy in Democratic state politics had looked like … people had a good idea of what it looked like, and now they don’t," said James Coleman Battista, a professor of political science at the University at Buffalo. "It’s going to be an event that spurs a lot of competition, and in this environment, who knows what’s going to happen?"

As for Schneiderman’s huge portfolio of energy and climate cases, experts said they expect this work to continue as it was.

In many of the high-profile federal cases, some noted, Schneiderman was one of several state attorneys general who signed on, so his absence won’t have an effect. And the staff in Schneiderman’s office hasn’t changed, they pointed out.

Peter Iwanowicz, executive director of Environmental Advocates of New York, said he expects the post-Schneiderman attorney general to be just as aggressive as he was.

"We’ve seen that the New York State Attorney General’s Office, regardless of party, has a rich history of standing up for New York’s environment and litigating against people who have not only violated the law but harmful policies from Washington," he said. "I don’t believe there’ll be much change."