Schumer aims to pass bipartisan deal ‘in a matter of days’ 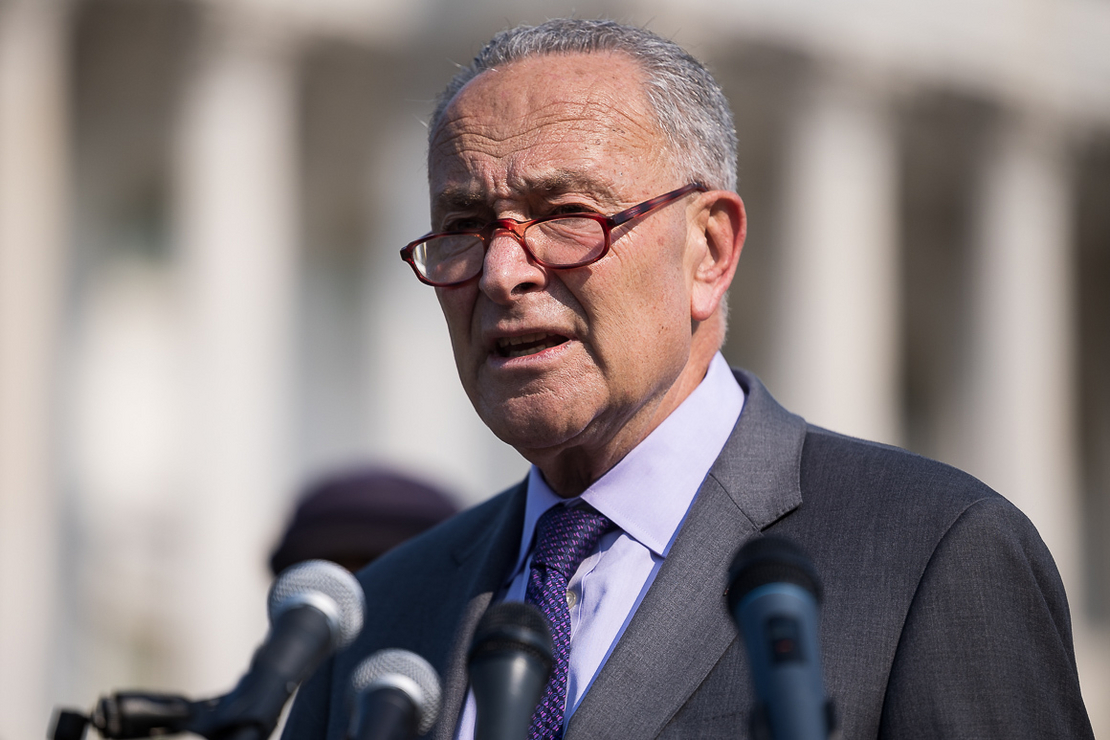 The bipartisan Senate infrastructure package cleared another procedural hurdle today, setting the stage for a possible weekend session as Democrats look to pass the measure through at least one chamber before the August recess.

Senators voted 66-28 to proceed to the bipartisan deal agreed to earlier this week, the text of which was still being drafted. Earlier this week, all 50 Democrats as well as 17 Republicans voted to end debate on the motion to proceed.

The vote was briefly delayed today as negotiators grappled with outstanding issues. The lack of text is complicating matters because senators cannot file amendments until the legislation is complete (E&E Daily, July 30). A 2,540-page draft obtained by E&E News this morning is evidence of progress.

"There are a couple of new issues. One arose late last night,” said Sen. Susan Collins (R-Maine). She declined to discuss it further.

Senate Majority Leader Chuck Schumer (D-N.Y.) repeated his promise this morning to move forward with the negotiated draft and open it to amendments. How many will come up remains to be seen.

“Given the bipartisan nature of the bill, the Senate should be able to process this legislation rather quickly,” he said. “We may need the weekend. We may vote on several amendments, but with the cooperation of our Republican colleagues, I believe we can finish the bipartisan infrastructure bill in a matter of days.”

Schumer also reiterated the Senate will pass, before the August recess, the $3.5 trillion budget resolution that will unlock the reconciliation process for passing the rest of President Biden’s infrastructure agenda.

“It’s an ambitious deadline, absolutely, but the hard work put in by senators and staff means that we are on the right track to get it done,” he said.

What happens to the Senate infrastructure bill once it arrives in the House is still something of an open question. Conventional wisdom would suggest the House will take it up as-is alongside a reconciliation measure, understanding that making substantial changes to the Senate’s product could alienate bipartisan negotiators.

But Rep. Peter DeFazio (D-Ore.), chair of the House Transportation and Infrastructure Committee, relayed again this morning his strong desire to go to conference on the Senate agreement to save portions of his "INVEST in America Act," H.R. 3684.

“The ‘INVEST Act,’ you know, I set out an objective to deal with our crumbling infrastructure, to deal with it in a way that also dealt with climate change to create millions of good-paying jobs to reach into areas that have persistent poverty … to provide new transit options,” said DeFazio at a news conference this morning with fellow House Democratic leaders and committee chairs.

“Right now, we have not yet seen a bill out of the Senate, so I can’t particularly comment on it,” continued DeFazio, much more subdued on the subject than he has been in recent days. “I have been engaged, though, with my colleagues — my Democratic colleagues, who are chairs of jurisdiction — and with the White House just yesterday, and I’m expressing a strong desire that, should the Senate pass a bill, that we should conference that bill and work out our differences.”

His bill, DeFazio said, “has all the objectives that the president and the White House set out for me. And I want to make certain that they’re in the final package, so that would best be accomplished through a conference.”