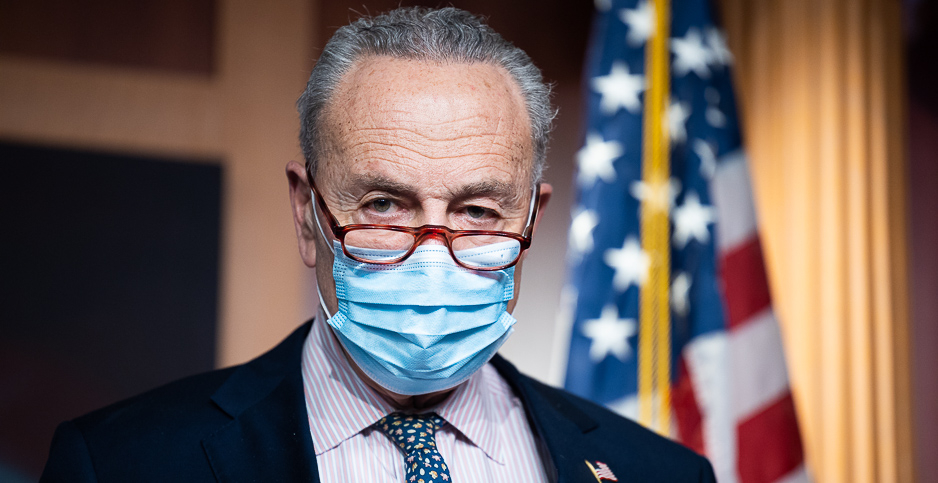 Democrats could pass some — but not all — climate legislation without Republicans by using their 50-50 Senate majority, with Vice President Kamala Harris casting the tiebreaking vote.

"We’re looking at how we make ‘build it back better’ fit — as much of it into reconciliation as we can," Schumer said in an interview on "The Rachel Maddow Show," referring to the slogan of Biden’s climate and infrastructure plan.

Unprompted, Schumer suggested last night that climate programs left out of reconciliation could be enacted if Biden declares climate a national emergency. He cited the precedent of President Trump’s emergency declaration to build walls along the border with Mexico.

"Can I say one more thing on climate — I think it might be a good idea for President Biden to call a climate emergency," Schumer said. "Then he can do many, many things under the emergency powers of the president that wouldn’t have to go through — that he could do without legislation."

Schumer said an emergency declaration would give Biden "more flexibility."

Democrats are still debating how far they can push the rules of reconciliation, with some progressives arguing that as much as a clean electricity standard could pass muster with the Senate parliamentarian.

Biden’s "Build Back Better" climate plan calls for $2 trillion of infrastructure spending over four years, construction of 1.5 million sustainable homes, plugging a quarter-million abandoned oil and gas wells, and putting the electricity sector on a path to decarbonization by 2035.

Democrats are already debating whether to use reconciliation to pass pandemic relief. Biden has sought Republican support for the package, but even moderate GOP senators have signaled discomfort with it.

Democrats can use reconciliation twice this calendar year, because there haven’t been budget resolutions for the current fiscal year or the next one. The second reconciliation bill will cover infrastructure and climate, Schumer said.