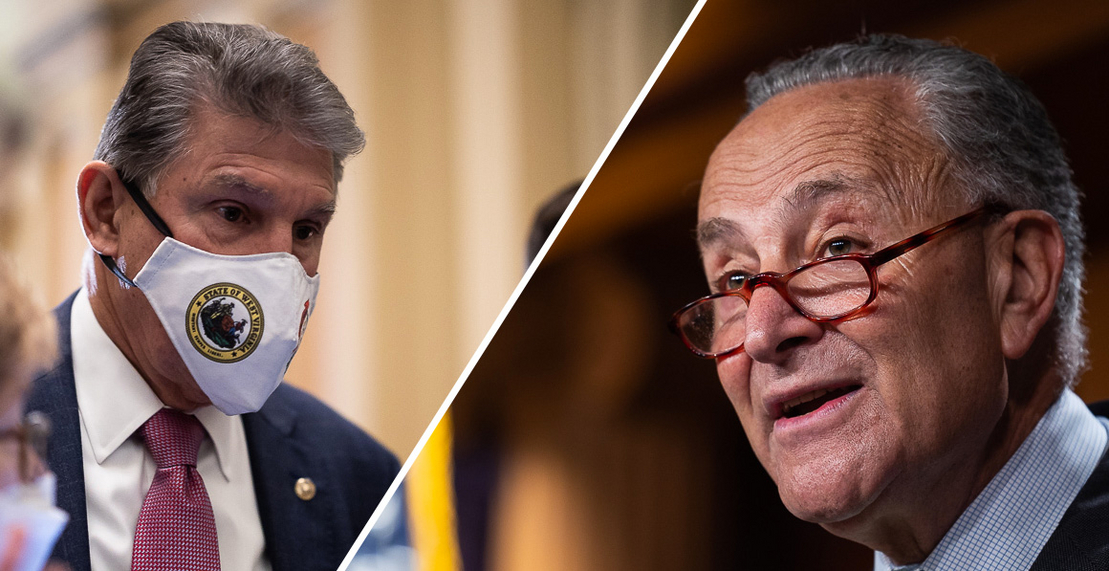 In a call with fellow Senate Democrats last night, Schumer promised to hold a procedural vote on the reconciliation bill in January despite Sunday’s announcement from Sen. Joe Manchin (D-W.Va.), the party’s decisive swing vote, that he was opposed to the legislation as currently written.

“Senators should be aware that the Senate will, in fact, consider the ‘Build Back Better Act,’ very early in the new year, so that every member of this body has the opportunity to make their position known on the Senate floor, not just on television,” Schumer told members on last night’s call, according to a Democratic source present.

It was a not-so-thinly veiled reference to Manchin’s decision to air his grievances with the legislation on "Fox News Sunday," taking his own colleagues and the White House by surprise after weeks of negotiations with President Biden that were frequently characterized as productive (E&E Daily, Dec. 20).

Manchin addressed members on the call last night. His spokesperson, Sam Runyon, confirmed it was “an honest conversation with his colleagues for whom he has a great deal of respect,” while POLITICO reported the West Virginian continued to defend his position now as consistent with his months of warnings about the consequences of passing a massive spending bill amid rising inflation.

Schumer’s current plan, according to the source on the call, would be to bring up H.R. 5376, the House-passed “Build Back Better Act,” as amended with the slightly different legislative language the various committees with jurisdiction over the reconciliation process have produced over the last month — “unless we are able to reach an agreement on modifications acceptable to the entire caucus ahead of that vote.”

That new text, written in consultation with the Senate parliamentarian, would include a still-to-be-finalized compromise with Manchin on how to implement a methane fee and the Senate Energy and Natural Resources Committee’s proposal to scrap the House measure’s permanent ban on all drilling in the Atlantic and Pacific oceans and off the Gulf of Mexico (E&E Daily, Dec. 16).

“I know we are all frustrated at this outcome,” Schumer told members, according to the source. “However, we are not giving up on ["Build Back Better"]. Period. We won’t stop working on it until we pass a bill.”

The source said members were “behind the idea of having a vote and getting something done,” desperate not to have wasted months of painstaking negotiations over the centerpiece of Biden’s domestic agenda — one they think could carry the party to victory in the 2022 midterms and the 2024 race to retain control of the White House.

There is still, however, little certainty that repeated votes on the bill will accomplish the desired outcome unless Democratic leaders and the Biden administration can work up compromises with Manchin that the rest of the party in both chambers can live with. The Senate remains split 50-50, and Democrats only hold a majority in the House by a three-vote margin.

Rep. Pramila Jayapal (D-Wash.), chair of the Congressional Progressive Caucus, said Monday her 96-member-strong coalition would begin pushing Biden to use his unilateral authority to enact many of the policy changes the reconciliation bill would have achieved now that the legislation appears stalled due to Manchin’s opposition.

In a statement today, Jayapal doubled down in that request, saying that the Progressive Caucus would soon “release a comprehensive vision” for what Biden’s executive action strategy should look like. The group’s request, she said, would include an ask for presidential orders to “show the world that America is serious about our leadership on climate action.”

She added that while progressives wouldn’t give up on passing the "Build Back Better Act," they were now done compromising or scaling back their ambitions to please their moderate colleague across the Capitol.

“In Congress, we will continue to prioritize a legislative path for ‘Build Back Better,’ focused on taking the current text of the legislation passed by the House, keeping as much of it as possible — but no less than the elements contained in the framework negotiated by the president and committed to by Sens. Manchin and [Kyrsten] Sinema some months ago,” Jayapal said. “We have worked too long and too hard to give up now, and we have no intention of doing so.”