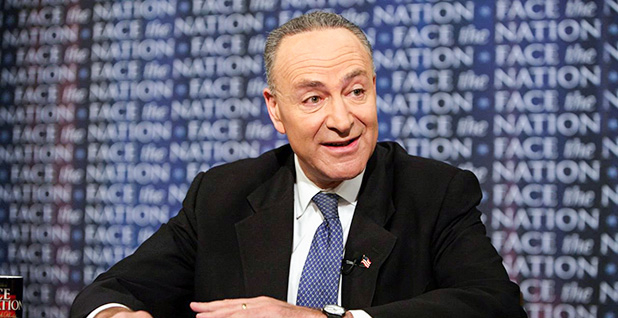 The action could put in jeopardy a series of bipartisan proposals widely seen to help chip away at carbon emissions from the power sector, including measures to advance battery storage, energy efficiency, and clean energy technologies like carbon capture and advanced nuclear.

Schumer’s threat appears to be in support of the presumptive Democratic FERC nominee Allison Clements, an energy lawyer who heads the clean energy market program at the Energy Foundation.

Her name was put forward by Schumer earlier this year as the preferred choice for the open Democratic position on the commission (E&E News PM, Feb. 5)

But the president is unlikely to tap Clements at the same time, sources have indicated, raising the prospect the Trump administration will only move the one nomination (Energywire, Sept. 19).

FERC currently has a 2-1 Republican majority, with two vacancies. The commission needs three members to constitute a quorum.

A series of commissioner recusals have raised the prospect the agency could not function on certain topics without new members.

Because of recent Senate rule changes, Democrats have much less power to block the Republican nomine. Schumer’s office did not immediately return calls for comment.

Energy and Natural Resources Chairwoman Lisa Murkowski (R-Alaska) signaled earlier this week she was willing to move any qualified nominee who gets named, even if that contender does not come with a Democratic pairing.

"We’ve been waiting for so long on somebody to come forward that I want to get moving," she told reporters Monday night.

Asked whether she was willing to move someone without a pairing, the Alaska Republican said the chamber has "done it in the past, but I think it’s also important that we recognize that the seat we are looking to fill, the McIntyre seat, is one that his term did not expire naturally at the end of his term."

"It was a very unfortunate death," she added.

Former FERC Chairman Kevin McIntyre led the panel for much of 2018 before succumbing to cancer at the beginning of this year.

Schumer’s threatened blockade would up the ante in the FERC nomination battle flowing through the Senate in recent years.

At the end of last year, Republicans moved the nomination of GOP Commissioner Bernard McNamee at breathtaking pace, despite opposition from Democrats over climate change. He ultimately passed on a 50-49 party-line vote.

He added, "We have a person teed up, very bright person, who I think will do a great job, and they should put them up. I’ve talked with Lisa Murkowski, and hopefully she can support that position. That’s what we have done before, and that’s what we should do this time."