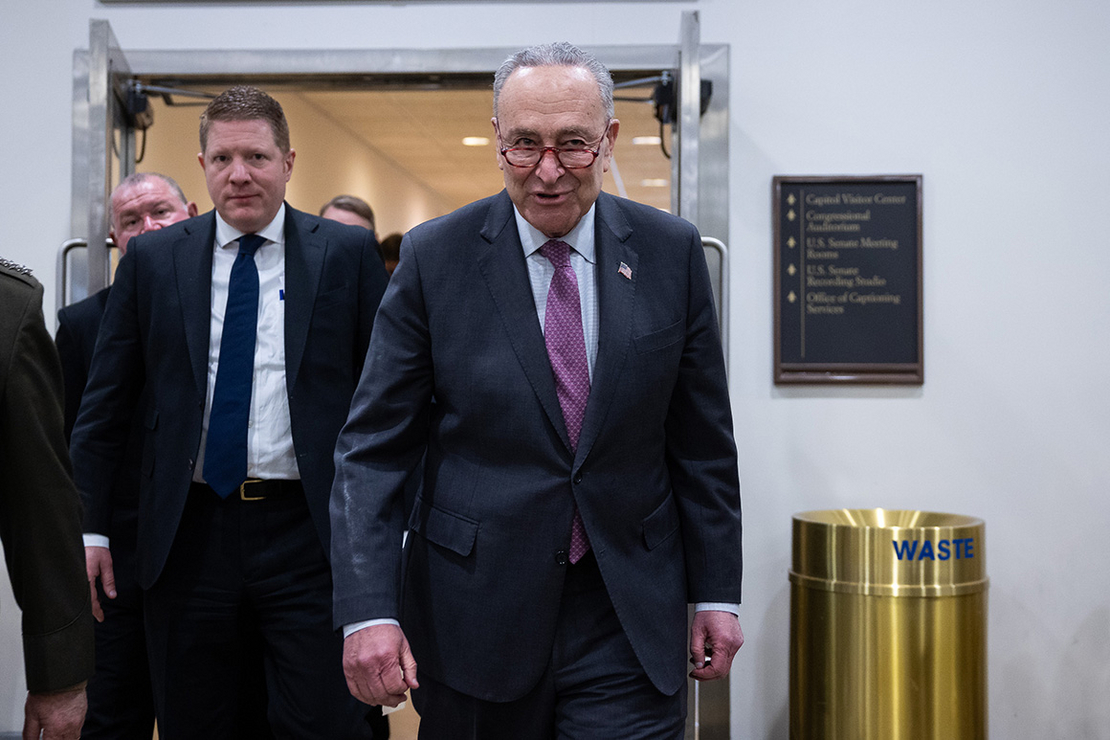 The rhetoric comes as Democrats and the White House look to redirect the debate over high gasoline prices — stemming largely from the Covid-19 pandemic and the war in Ukraine — away from the Biden administration’s energy policy.

“The bewildering incongruity between falling oil prices and rising gas prices smacks of price gouging and is deeply damaging to working Americans,” Schumer said during his daily floor speech. “The Senate is going to get answers, and that’s why we will be calling on the CEOs of major oil companies to come testify before Congress.”

Schumer’s announcement did not indicate which committee would hold such a hearing, although multiple panels could claim jurisdiction, including those of Energy and Natural Resources Chair Joe Manchin (D-W.Va.); Commerce, Science and Transportation Chair Maria Cantwell (D-Wash.); and Finance Chair Ron Wyden (D-Ore.).

Schumer’s office did not return a request for more information about the potential oil executive testimony. Cantwell mentioned the possibility of such a hearing of her committee during an Energy and Natural Resources session last week.

Cantwell today said, “We are all exploring how we can get more information about what we can do to protect the American consumer.”

Manchin has been urging the administration to lessen restrictions on fossil fuel production. Today he didn’t seem keen on going after oil companies.

“I have no problem bringing them in to basically explain how the process works,” Manchin told reporters. “Then we can all understand it a little better, rather than beating people up who are expected to provide the energy we need.”

Oil prices have started to drop amid concerns about reduced demand because of new Covid-19 cases in Europe and China. The U.S. West Texas Intermediate price was hovering around $95.60 per barrel this morning. The Brent crude benchmark was near $98.50 per barrel earlier today.

Prices spiked this month to record levels following a U.S. ban on Russian energy imports. Prices topped $130 a barrel as the market contemplated more countries limiting their use of oil form the world’s third major producer.

Despite the decrease in oil prices, gasoline prices have been slow to match, Schumer said.

Schumer said oil and gas companies have been using the crisis and windfall profits for a stock buyback initiative that would raise the price of the companies’ shares while shirking consumers.

“That is so wrong, and one of the disturbing signs of American capitalism,” Schumer said. “These trends demand answers, and the CEOs of large oil and gas companies should be advised they will have to provide answers before the Senate very soon.”

The White House has taken notice, as well.

“Oil prices are decreasing, gas prices should too. Last time oil was $96 a barrel, gas was $3.62 a gallon. Now it’s $4.31. Oil and gas companies shouldn’t pad their profits at the expense of hardworking Americans,” President Biden said from his official Twitter account.

The U.S. Energy Information Administration predicted earlier this month that crude oil prices would average just above $110 a barrel for the second quarter. That estimate did not include the impacts of various countries banning Russian oil imports after Russia’s invasion of Ukraine.

The House had already planned to bring in major oil and gas executives as part of an investigation by the Oversight and Reform Committee into the sector’s influence around climate change policies.

A hearing was supposed to have happened earlier this month, but Chair Carolyn Maloney (D-N.Y.) opted to postpone the session in the immediate aftermath of the Russian invasion.