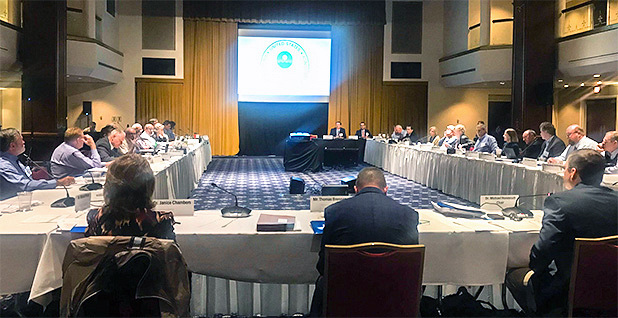 But his preferred fix ran into an array of objections later that year from Science Advisory Board members, some of whom questioned its legality or warned that it would undercut the panel’s ability to scrutinize proposed EPA regulations, newly released documents show.

"I have serious concerns about the impact of the EPA proposal which has the potential to strip the SAB of any realistic oversight," Rob Merritt, a retired oil company geologist, wrote in comments on the draft changes to the "engagement process" that would have shifted responsibility to the board’s chairman for deciding which proposed rules warranted review (Greenwire, Dec. 10, 2019).

In her comments, Alison Cullen, a public policy professor at the University of Washington, wrote that the proposed changes did not "fully address existing issues, while introducing significant new concerns." Among those concerns: whether the new policy complied with the Environmental Research, Development and Demonstration Authorization Act, the 1978 law that created the board.

"Recent years represent a departure both in terms of the quality and completeness of content transmitted by EPA to the SAB and also the timeliness with which this has occurred," Cullen wrote. "However, the development of a new process that is inconsistent with ERDAA does not address these concerns."

The proposed new process "would deeply compromise the ability of the SAB to provide independent reviews of the adequacy and scientific basis of proposed regulations, one of the principal duties listed in its charter," Pete Wilcoxen, a Syracuse University public administration professor, said in his comments.

E&E News obtained the submissions through a Freedom of Information Act request. They show that about one-third of the board’s 44 members weighed in late last year with feedback on the draft. The comments also indicate that unease about the new decisionmaking framework was more widespread than previously known. Those voicing qualms included members with industry connections, as well as academics.

In the final version released last month, Wheeler made some concessions. The main one was to allow SAB Chairman Michael Honeycutt to bring in other board members on a rotating basis to help decide whether a particular proposed rule justifies board review (E&E News PM, Feb. 26).

In a statement last month, an EPA spokeswoman said the new process ensures that the board gets early notice of major rulemakings, as well as "transparent and consistent" information about specific proposals.

Merritt, whose LinkedIn profile now describes him as a consultant, could not be reached late last week; Cullen had no comment. In a phone interview, Wilcoxen said the final version "substantially" addressed his concerns about what he described as a "very badly flawed" original draft.

But in email exchanges, two other board members said that at least some of their reservations remain.

"The new process appears to try and fix a problem that did not exist and may in fact work against the stated ‘needs’ for timely and early notification, transparency, and coordination," said Mark Wiesner, a Duke University engineering professor.

"I think that every board member should have the opportunity to express their opinion in the interest of transparency and consistency," said John Guckenheimer, a retired Cornell University mathematics professor. "We all have different expertise and sensitivity to scientific issues."

The board, which held a public teleconference yesterday, was created to furnish outside expertise to EPA on a range of issues (see related story). During the Trump administration, however, the relationship between the two has come under increasing strain. With critics alleging that the administration is using slipshod science to justify various planned rollbacks, the SAB’s oversight role has become more pronounced (E&E News PM, Jan. 2).

The tension also appears to have accentuated previous complaints about EPA’s willingness to share information. Board members, for example, have said they were blindsided by then-Administrator Scott Pruitt’s April 2018 decision to pursue landmark restrictions on the types of scientific studies used in drafting new regulations. At a board meeting last June, Wheeler had deemed the existing engagement process "broken" and promised improvement (Greenwire, June 5, 2019).

Previously, an SAB subcommittee would vet proposed regulations for review, followed by a public discussion and final decision by the full board. Under the framework put in place last month, Honeycutt will henceforth get monthly closed-door briefings from EPA staff on significant new proposals and then have 10 business days to make a decision with the help of up to eight other board members with expertise in a specific area. The amount of turnaround time marked another change from the draft, which had allowed only three business days for a decision.

"I know for a fact — he told me personally — that the administrator really does value the board’s input," Tom Brennan, who heads the EPA office that works with the SAB, told members during yesterday’s teleconference.

Attempts in recent days to reach other SAB members who had voiced concerns about the draft were mostly unsuccessful. But those concessions have failed to assuage outside critics who have questioned the motivation for the new policy. Among them is House Science, Space and Technology Chairwoman Eddie Bernice Johnson (D-Texas). In a letter to Wheeler last month, Johnson described it as apparent retaliation for SAB criticism of proposed rulemakings (E&E Daily, Feb. 12).

In an email yesterday, a committee spokeswoman said that EPA did not answer most of the questions posed in the letter but did not specify whether Johnson intended to further follow up.

In the comments filed last year, several board members also voiced worries about the impact of the new policy on Honeycutt’s workload or questioned how well it would work under a different chairman. Honeycutt, the toxicology chief at the Texas Commission on Environmental Quality, was named to the board by Pruitt in October 2017 (E&E Daily, Oct. 31, 2017). His term expires at the end of September.

Other SAB members have praised what they describe as his efforts to defend the board’s independence. But while the EPA administrator has customarily appointed board members to two consecutive three-year terms, that tradition has eroded under the Trump administration. In an email yesterday, Honeycutt indicated that he has not made up his mind whether to request a second stint.

"The list of nominations for the next round of board members will go out for public comment in several weeks," he wrote. "I need to make a final decision of whether or not I want to be reconsidered by then."